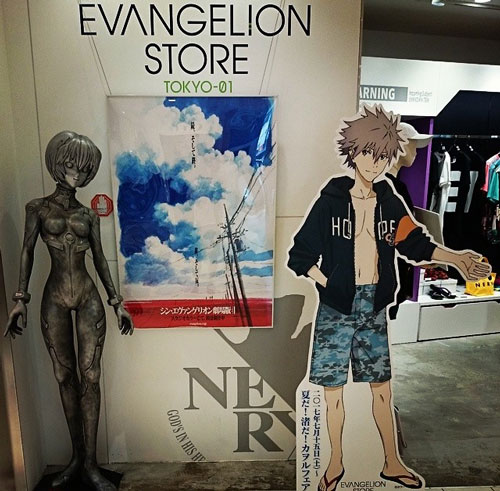 North-west of central Tokyo is one of the most active centers in the city. Being the third busiest station in Tokyo, Ikebukuro is an area that offers a variety of activities for all audiences. Ikebukuro is one of the meeting places for young people, so you can see groups of friends walking through the district.

Shopping center Sunshine 60 is in Ikebukuro, which is one of the highest towers in the country and houses plenty of shopping opportunities and entertainment. The Pokémon Center of Ikebukuro in Sunshine 60 attracts thousands of fans of the franchise due to its stuffed animals and objects that can only be obtained here. A large Pokedex along with a Pokeball and several statues of famous Pokémon adorn the place. A true dream for the Pokémon trainers of the world.

Namjatown is also found in Sunshine 60. It is a kind of indoor theme park where you can enjoy many attractions such as detective games,  shooting games and horror houses. There are food court where you can try variety of gyoza dumplings from different parts of Japan. Next to Namjatown is Mazaria. Its main attractions are Virtual Reality. You can enjoy the adventures riding on the imaginary bicycles, boats and Mariocarts to explore the adventurous virtual world.

If you go up to the 60th Observation floor, you can enjoy the magnificent view of Tokyo. On a clear day, you may see Mount Fuji.  Sunshine 60 also has a large Aquarium and multiple fashion stores of international brands as well as Japanese brands.

Another attraction is the large Bic Camera, a multi-story complex where you can find almost any technological device, from cameras and telephones to televisions, household machines, or watches. There are floors and floors of everyday objects at a relatively affordable price. Due to its great success, this store also has slightly smaller branches elsewhere.

Ikebukuro is also home to the official store of the legendary anime Evangelion. The ‘Eva Store‘ has shirt collections, the entire series in different formats, cups, key rings, plush toys, and even prestigious jewelry. Evangelion became a cult anime, so many jewelry companies have collaborated with the store to make expensive necklaces, watches, and rings for the most devoted fans of the series.

Other interesting attractions of this city are the thematic cafes mainly aimed at ladies, for example, the Butler Cafe ‘Swallow Tail’, the male equivalent of the Maid Cafes in Akihabara. Here clients are served by handsome butlers who call them “princess”, and they put a small tiara on their head and for about two hours continuously praise the client to make them feel spoiled.

Ikebukuro being downtown Tokyo has many restaurants for traditional Japanese food and typical Western or Chinese food, as well as hundreds of clothing stores for all tastes and sizes. The Chinatown of Tokyo is in Ikebukuro and it is interesting to see the differences between this area and other areas in the city.

There are at least three different stores dedicated to the Japanese dish abura soba in Ikebukuro. This specialty food is a combination of east and west and it is very delicious.

Competing with Akihabara, Ikebukuro has recently become a neighborhood dedicated to the culture of anime and video games, having branches of classic store Super Potato and the famous Animate department store along with many other well-known stores for fans. So if you want to get a taste of Japanese-style nerdy culture, head to Ikebukuro!

If you would like to be able to enter off the beaten path places that you normally can’t as a tourist if you don’t speak Japanese, booking a bilingual private guide would be a great idea.

In the prefecture of Saitama, there is a special place, an intact village that has remaine...
">

Shinjuku is known for its impressive streets full of neon signs. Throughout the territory,...