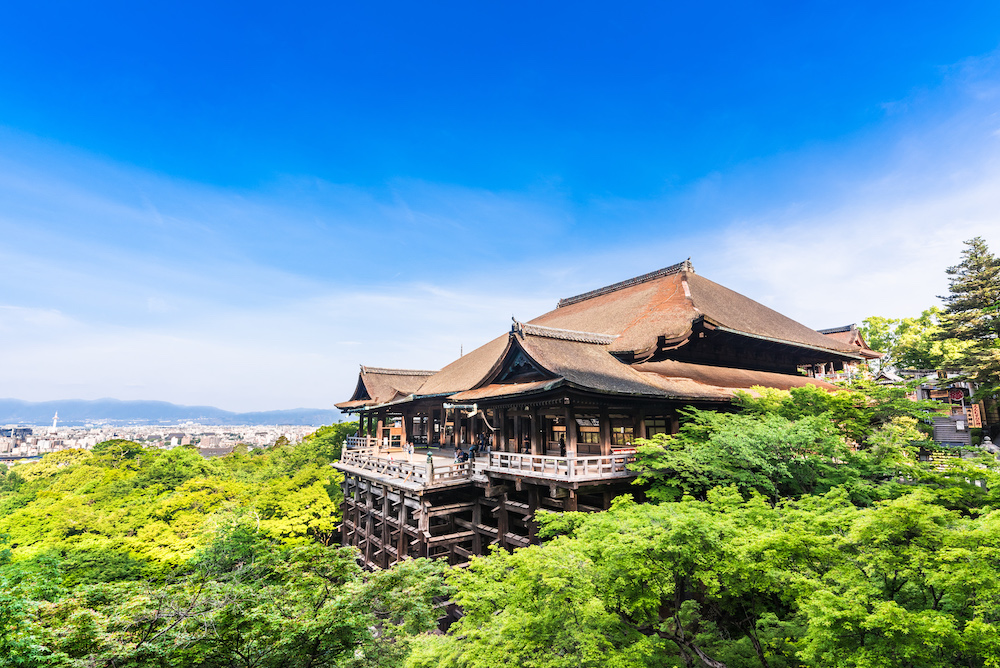 More than 1200 years have passed since the founding of the Kiyomizu-Dera temple. Situated halfway to Mount Otowa, on one of the peaks of the Higashiyama mountain range of Kyoto, this temple draws a large number of visitors who want to pay their respect to Kannon, a deity of great mercy and compassion. For this reason, it is known as a ‘Kannon Reijo’. Reijo is a Japanese word that means ‘sacred place’. Kannon’s figure embodies her grateful heart: feelings of gratitude for coming to this world, her quiet daily life and her loved ones, friends, and acquaintances who are always by her side.

This ancient temple was first built in 798, but the current buildings are reconstructions that date back to 1633. As an affiliate of the Hossō school of Buddhism, which originated in Nara, it has successfully survived the many intrigues of the local schools of Kyoto Buddhism through the centuries and is now one of the most famous places in the city. It is especially crowded in the spring and autumn because of the beautiful natural scenery surrounding the grounds. 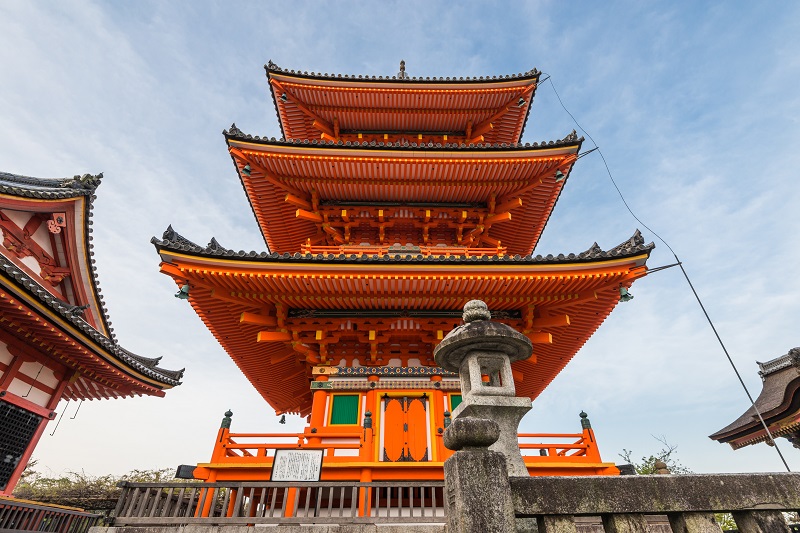 The Hondō (Main Hall) has a large terrace that is supported by pillars and protrudes over the hillside. Just below this room is the Otowa-no-Taki waterfall, where visitors can drink sacred water that is believed to provide health and longevity. Scattered around the enclosures there are other halls and shrines. In the Jishu-jinja, the sanctuary that climbs the steps above the main hall, visitors pray for success in love by closing their eyes and walking about 18 meters between a pair of stones; if the stone is lost, the desire for love will not be fulfilled. It should be borne in mind that someone can be asked to guide him, but if he does, then someone’s help is needed to find true love.

The main parts of the Kiyomizu-Dera Temple are:

This is the main entrance of the Kiyomizu-Dera temple. It was set on fire during a civil war (1467-1477) and rebuilt in the early 16th century. In 2003, the door was disassembled and restored. This magnificent two-story door is approximately 10 meters wide, 5 meters long and 14 meters high. It shows the unique characteristics of the time it was rebuilt.

The current building was rebuilt in 1631. With the spectacular views of the sunset from the Sai-mon site, it has long been considered a gateway to Paradise and is known as a sacred place for Nissokan, one of the meditation practices to visualize the pure Earth.

The current building was rebuilt in 1718. The main image of this room is the Daizuigu Bodhisattva (a hidden Buddhist image), who kindly listens to the wishes and aspirations of each person. Shinto and Buddhist deities of pairing, safe childbirth and child-rearing are also enshrined. A special tour is offered here to explore the sanctified area under the room, called Tainai Meguri.

The main hall in the Kiyomizu-Dera temple is located on the cliff of the mountain. Otowa is a renowned wooden structure rebuilt in 1633. The main image of Kiyomizu, the statue of the Kannon Bodhisattva with eleven heads and one thousand arms, is enshrined in the innermost section of the Hall. Using a traditional Japanese method of construction, it is solid enough to support the terrace, which is always full of visitors.

The Okuno-in room is located directly above the Otowa waterfall. The current building was rebuilt at the same time as the Main Hall in 1633. Okuno-in also has a spacious stage built with a unique method, just like the Main Hall. The impressive view of the Main Hall stage and the Kyoto cityscape make it a favorite photo opportunity spot for visitors.

The Kiyomizu-Dera Temple originates from the Otowa waterfall and takes its name from the purity of the waters. Transparent and effusive waters have long been called ‘Konjiki-sui’ (golden water) or ‘Enmei-sui’ (water that prolongs life) and is suitable for use in purification. Visitors catch some water from each of the three streams with ladles and pray for the purification of their six senses and to make their wishes come true. But drinking from all three sources is not recommended because it is a sign of greed.

Jojuin was originally built as a dwelling for the venerable Gana, a priest who had long dedicated himself to the restoration of the Kiyomizu-Dera Temple after it caught fire during the war. Years later, the building was used as the sub-temple during the maintenance work of other temple buildings and to manage temple finances. Jojuin is also famous for its exquisite Moon Garden, which is only open to the public for a limited time each year.

Kiyomizu-Dera is the most popular tourist attraction in Kyoto, the Main Hall is an official National Treasury of Japan and the complex is listed by UNESCO as a World Heritage Site.

From  the Gojo-zaka bus stop

The official name of Sanjusangendo is Rengeo-in temple, and the structure is registered as...
">

The Shinto shrine "Sumiyoshi Taisha" was founded in 211, being one of the oldest shrines i...
">

In the Ueno park there are many temples and museums, and it is one of the best places to e...