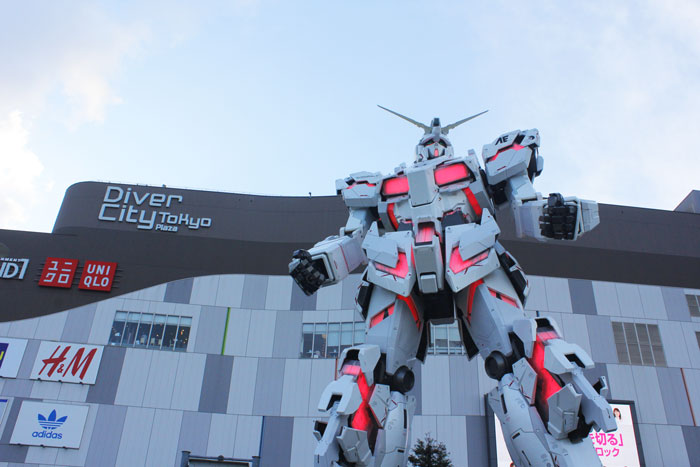 On one of Tokyo‘s artificial islands of, Odaiba, in front of the modern DiverCity shopping center, is the life-size statue of Gundam, one of the most iconic characters in Japanese animation. The anime series was first shown on TV in 1979, and it was so successful that subsequently a manga series, movie, and collectible models with a Gundam theme came out. The story is about a future where people live in space and use ‘mobile Gundam suits’ to fight with.

The life-size Unicorn Gundam is the newest addition of the franchise, it is an almost 20-meter high replica standing in front of Diver City in Odaiba. It is usually in its so-called resting ‘unicorn mode’, but a few times per day it goes into ‘destroy mode’ during which the antenna splits in 2 and starts to resemble a samurai helmet. This takes around 10 seconds. You can also enjoy a light and sound show at that time.

There is a small shop just behind the statue where you can buy snacks and Gundam-themed souvenirs. If you want to see a larger store with Gundam paraphernalia, you should head to the 7th floor of Diver City.

One of the best experiences that can be enjoyed in Japan at a technological level is the e...
">

A visit to RiSuPia is interesting for everyone who likes to see what the future has in sto...