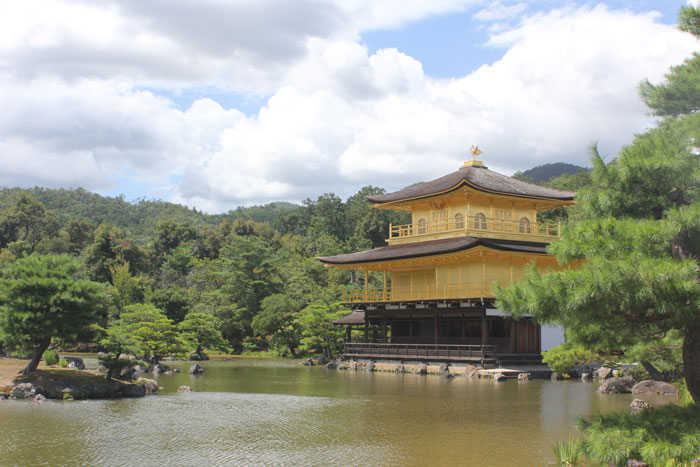 In the ancient capital of Japan, the beautiful city of Kyoto, you can see a landscape like no other. The temple Rokuonji, which literally means ‘Temple of the deer garden’ but better known by its informal name Kinkakuji or ‘Temple of the Golden Pavilion’, is a Buddhist temple of the Zen school. It was founded in 1397 as a resting villa for the third shogun of the Muromachi era, Ashikaga Yoshimitsu. This shogun asked his son to turn the villa into a Zen temple when he died, and so it happened.

Inside the Golden Pavilion 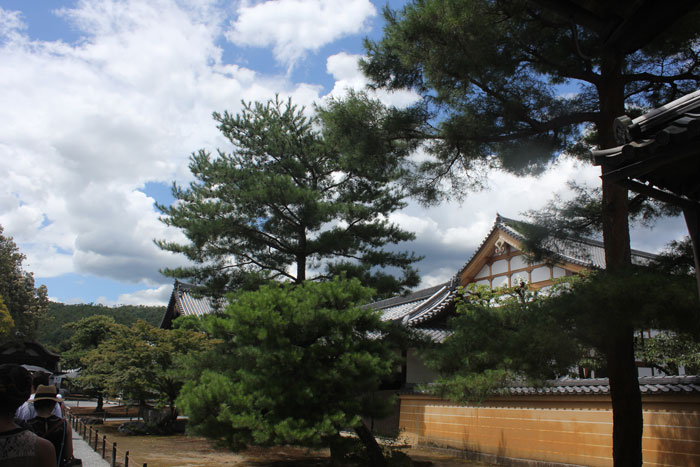 Kinkakuji was built in the style of the extravagant Kitayama culture that developed in the upper social circles of Kyoto during the late 14th century. Each floor is built in a different architectural style. The first floor was made in the Shinden style used for palace buildings during the Heian Period. It is made with wood pillars and the walls are plastered white, which makes for a nice contrast with the upper floors which are famously golden. There are two statues on the first floor, one of Buddha and one of Yoshimitsu.  You cannot enter the pavilion itself, but if you look closely you will be able to see the statues from across the pond because the windows are usually open.
The second floor is made in the style that was used for samurai residences, and the outside is completely covered with leaf gold. Inside this floor, there is a statue of Bodhisattva Kannon, nicknamed Goddess of Mercy, sitting surrounded by statues of the Four Heavenly Kings, however, these statues cannot be seen by the public. The third and highest floor was built in the style of a Chinese Zen Hall, is gilded on both the inside and outside, and is adorned by a golden phoenix.
Over the years this temple has suffered several fires, the most recent one in 1950 which was caused by a monk from the same temple. The enclosure completely burned down, but it was rebuilt in 1955 thanks to detailed plans for restoration that had been written down in the Meiji period. The plans faithfully portray the design made more than 500 years ago.
The Rokuonji, along with the mirror pond that surrounds the entire temple, is one of Japan’s most beautiful and iconic landscapes in any of the four seasons. The Kinkakuji is a true work of art of indescribable beauty.

If you are thinking about making a trip to Japan, as seasoned Japan experts we can help you create your perfect Japan tour, including destinations like Kinkakuji. Contact us to start planning your unforgettable holiday to this fascinating country full of once-in-a-lifetime experiences, culture, history, nature, and delicious food!

A 'machiya' is a traditional wooden house that is especially typical of Kyoto city. Machiy...