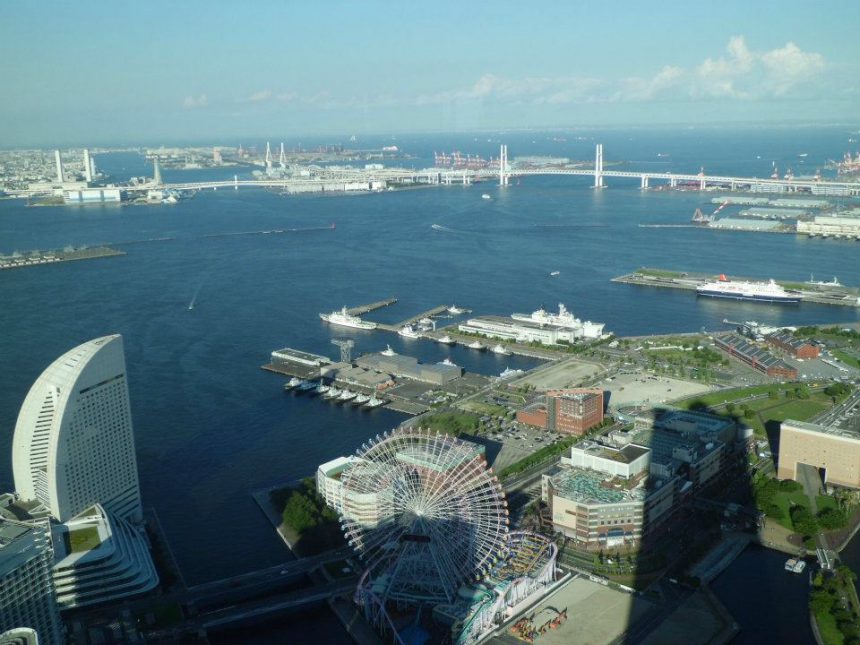 In 1981 the municipal government of Yokohama, Japan’s second-largest city after Tokyo, started to revitalize its port area in order to carry Yokohama into the 21st century as a business hub independent of Tokyo. Minato Mirai 21 is the 1.2-mile urban redevelopment of the waterfront of Yokohama. Minato Mirai 21 literally translates to ‘the future port city of the 21st century’. It is located southeast of Yokohama station and the east side of the area faces the Yokohama port.

Originally this was the location of a shipyard and a railroad freight terminal and redevelopment began in 1983. Since 1989, office buildings, high-rise condominiums, hotels, commercial complexes, entertainment facilities, and various other facilities have been completed one after another.

Landmark Tower: this is the highest building in Japan and it opened in 1993. Its height is 296 meters, there are 70 stories above ground. The building houses offices, a hotel, restaurants, and some clinics. On the 69th floor, there is an observatory room called Sky Garden, which is located at a height of 273 meters which makes it the highest observatory room in Japan. Additionally, the elevators also are the fastest in Japan going at a speed of up to 750 meters a minute. On the north side of the tower, there is a large shopping mall called Landmark Plaza.

Dockyard Garden: this is the area where many ships had been constructed between 1896 and 1973, and it is now used as an open terrace and the event site of Landmark Tower. Around here, there are several restaurants.
It is like a deep moat, and the surrounding slopes are made of stone like the auditorium of Roman theater. The Dockyard Garden has been designated as a historic structure.

Nippon-maru Memorial Park: this is a park located just south of Landmark Tower. Here you can find a large sailing ship called Nippon-maru and the Yokohama Maritime Museum that educates visitors on the Yokohama port and various ships. Nippon-maru was completed in 1930 as a navigation training ship and was retired in 1984. Now you can enter the ship to see what the inside looks like, as it became a museum.

Yokohama Cosmoworld: if you travel with kids you can’t skip Yokohama Cosmoworld, a compact amusement park with great views of the harbor area, especially after dark. There are attractions for kids aged 2 and up, and there is even a large rollercoaster for older kids and adults. The main attraction is the giant Ferris wheel which lights up gorgeously at night.

A visit to Yokohama isn’t complete without going to Minato Mirai 21!

If you are thinking about making a trip to Japan, as seasoned Japan experts we can help you create your perfect Japan tour including destinations like Yokohama. Contact us to start planning your unforgettable holiday to this fascinating country full of once-in-a-lifetime experiences, culture, history, nature, and delicious food!

Yokohama quickly grew from a small fishing village into one of Japan's major cities. There...
">

The Yokohama Red Brick Warehouse was built as a model warehouse in the country from the la...
">