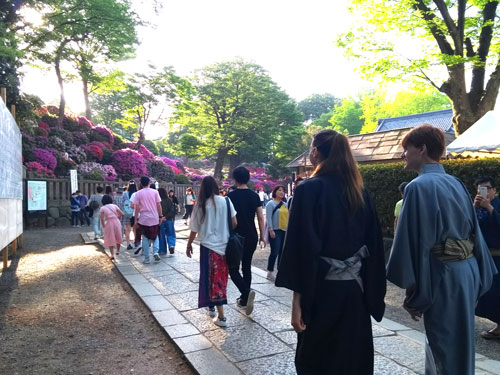 Kyoto is famous for its temples and shrines that are many years old and are preserved almost intact. Tokyo on the other hand, suffered a major bombardment by US forces in 1945, leaving very few long-standing buildings in the city. But not everything was lost. In the Nezu area, Tokyo, as its name says, is the Nezu Jinja (or Nezu shrine), the oldest Shinto shrine in Tokyo, established in 1705. This shrine is dedicated to the god of winds and seas and having survived the war, it is considered a heritage of high cultural importance since all its buildings date from the year in which it was established.

His Majesty Emperor Meiji, constantly sent petitions to this sanctuary to pray to the gods for his health. The place is designed in the same style as that of the famous Toshogu in Nikko with its imposing buildings, and it is not necessary to travel outside of Tokyo to observe them.

Upon entering the sanctuary you can see how the entire enclosure is covered by perfectly organized nature, giving the feeling that the complex is a large Japanese garden. Before arriving at the Haiden (front sanctuary) there is a huge door called Romon. This type of door is used both in Shinto shrines and in Buddhist temples. It has an upper floor that cannot be accessed. A karamon (Chinese-style gate) is a type of gate often found in Japanese castles, Buddhist temples, and Shinto shrines. Connected to it there is a Sukibei (lattice wall), a 200-meter wall that surrounds the main hall.

A similar combination of Karamon and Sukibei can be seen in the Ueno Toshogu, another Shinto shrine from the Edo period in Tokyo, closely associated with the Tokugawa shogunate. Both structures were built in 1706, and both are designated as Important Cultural Properties. The haiden in the background, the romon door, and the bridge that leads to these shrines form a perfect postcard and is one of the biggest attractions of the sanctuary. On the left side, there is a large and beautiful garden of multiple flowers, and after a short hike, you can reach a sanctuary in honor of the god Inari, with more than 100 torii in a row to arrive, very similar to the famous Fushimi Inari in Kyoto.

The Nezu Shrine is very famous for its Azalea (Tsutsuji Matsuri) flower festival lasting from April to early May. The whole area is filled with multicolored flowers that give off a delicious aroma. Azalea is a shrub with small leaves, with the edges folded down, white, pink, or red flowers, and gathered in groups of 2 to 5 and fruit in a red capsule. This event has been described as the most spectacular view of spring in the city of Tokyo.

The sanctuary enclosure is quite spacious, lots of nature, and very pleasant to walk. The sanctuary has its own lake that passes all around and there live some beautiful koi fish. The koi fish is a sacred animal in Shinto shrines as it is said that the gods reincarnated that way to be closer to humans. The Nezu Shrine is truly beautiful and has endured in time despite all the changes that the city of Tokyo has experienced.

In the Ueno park there are many temples and museums, and it is one of the best places to e...
">

In the Taito district of the city of Tokyo, you can find endless wonderful places of histo...