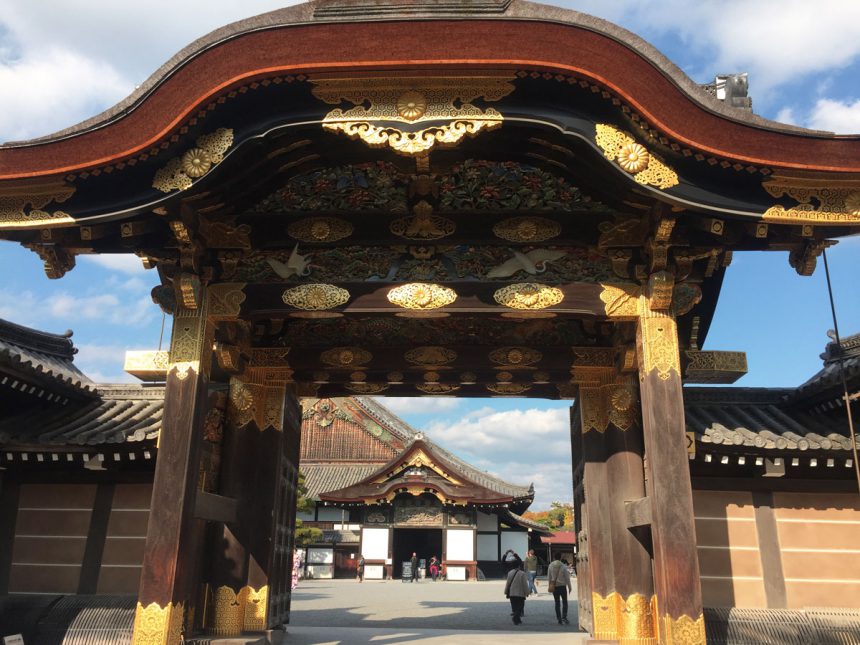 Nijo-jo Castle in Kyoto has witnessed some of the most important events in Japanese history in the 400 years since it was built.

The castle was completed in 1603 on the orders of Tokugawa Ieyasu, the founder and first shogun of the Tokugawa Shogunate (1603-1867). Tokugawa Ieyasu unified Japan after a long period of civil war and started an era of 260 years of peace and prosperity.

The castle was the Kyoto residence of the shogun when he visited the Imperial Capital, which only rarely happened. When the Shogun was staying in the castle, the Nijo Zaiban samurai guards were staying there.

In 1867, the 15th shogun returned the political control to the Emperor. The Meiji Period started, during which Japan developed very rapidly from a feudal society into a modern country modeled after countries in the West as we know it today. The Nijo-jo Castle was there for the opening and closing ceremonies of the last period of feudal rule, as well as being the starting point of the creation of the modern Japanese state.

In 1940 the palace was first opened to the public. Today it is one of the most important tourist spots in the city of Kyoto. 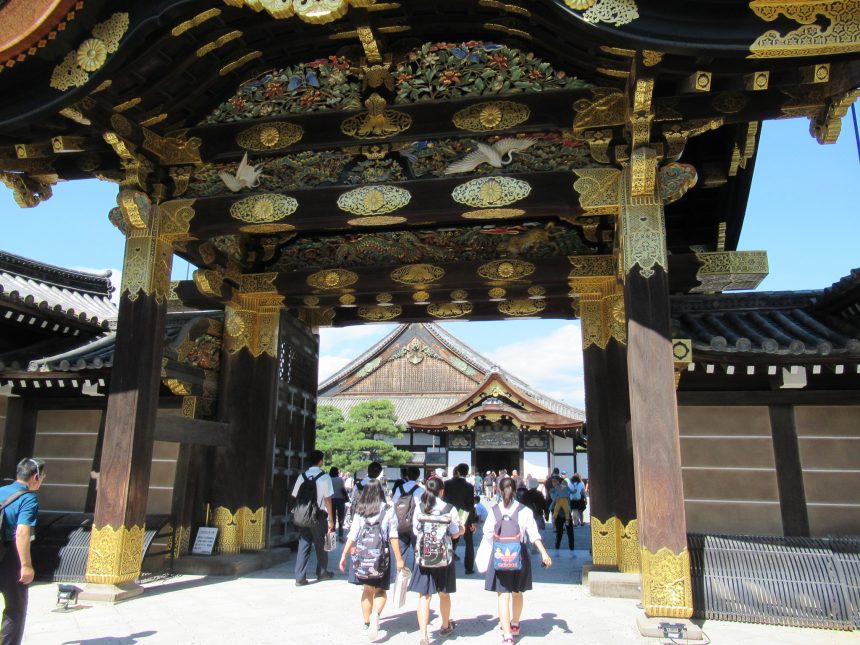 The Kara-mon Gate stands at the entrance to the Ninomaru-goten Palace. Gate architecture is used to indicate status, with the Kara-mon gate representing the highest status, indicated by the cusp gable to the front and back of the roof, and the use of cypress bark rather than copper or tile for the roofing.

The Palace consists of six connected buildings arranged in a diagonal line from the southeast to the northwest. The Palace has 33 rooms and over 800 tatami mats and is decorated with paintings by the Kano School (replicas). Subjects include the Matsutaka-zu (pine and hawk), tigers, and leopards, all of which stress the authority of the Shogun, as well as cherry blossoms and other flowers representing the four seasons.

The Ninomaru Garden was redesigned by Kobori Enshu, the commissioner of works for the 1626 Imperial Visit. It is a classical Shoin-zukuri style garden, with a large Horai-jima island (symbolizing Paradise) flanked by a crane island and a turtle island, both metaphors for longevity.

The base of the keep tower 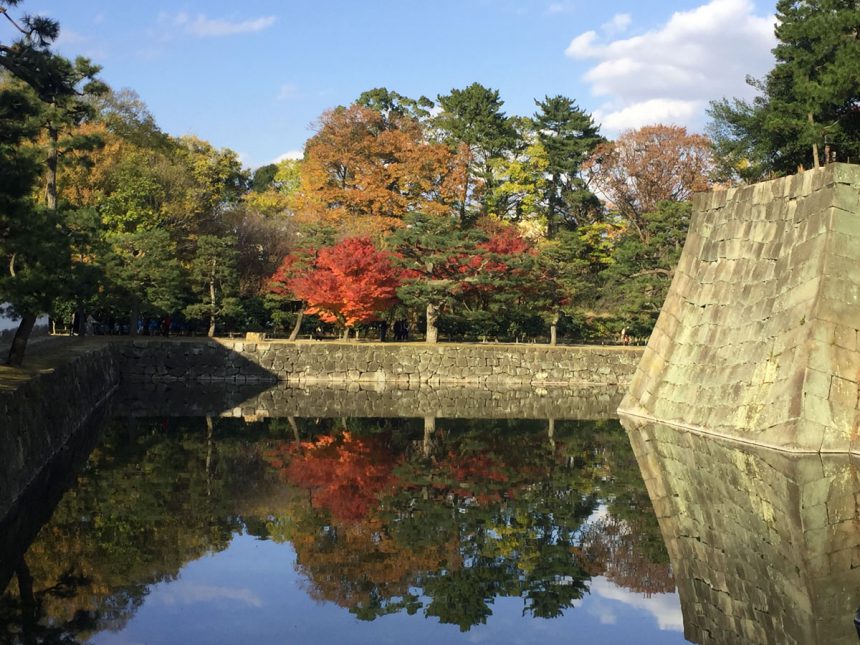 A five-storied keep tower with 6 floors inside used to stand at the south-west corner of the Honmaru. In 1750, the tower was struck by lightning and burned down. It was not rebuilt, but the stone ramparts on which it previously stood still remain and provide expansive views of the Honmaru-goten Palace, Honmaru Gardens, and the city of Kyoto. 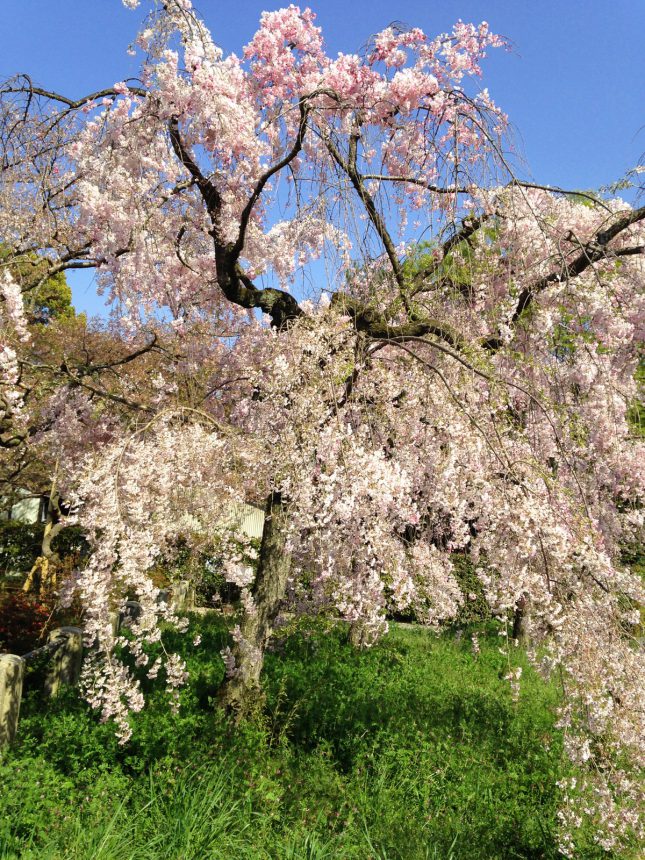 There are several gardens at the Nijo-jo Castle where you can enjoy seasonal flowers such as cherry blossoms and plum blossoms. In autumn, you can see the beautifully colored maple leaves.

The 400-year-old buildings of the Ninomaru-goten Palace, the Kara-mon Gate, and the Ninomaru Garden are unique survivors of one of the golden ages of Japanese architecture and design, the early Edo period, known for its ornate architecture and magnificent interiors. If you are interested in the history of Japan and especially like the Edo period, it is highly recommended to visit this castle while traveling through Kyoto.

If you are thinking about making a trip to Japan, as seasoned Japan experts we can help you create your perfect Japan tour, including destinations like Niji-jo Castle. Contact us to start planning your unforgettable holiday to this fascinating country full of once-in-a-lifetime experiences, culture, history, nature, and delicious food!

Only Garden: Adult 620 yen, free of charge for High school and elementary student

A 'machiya' is a traditional wooden house that is especially typical of Kyoto city. Machiy...
">

Nijo-jo Castle in Kyoto has witnessed some of the most important events in Japanese histor...
">