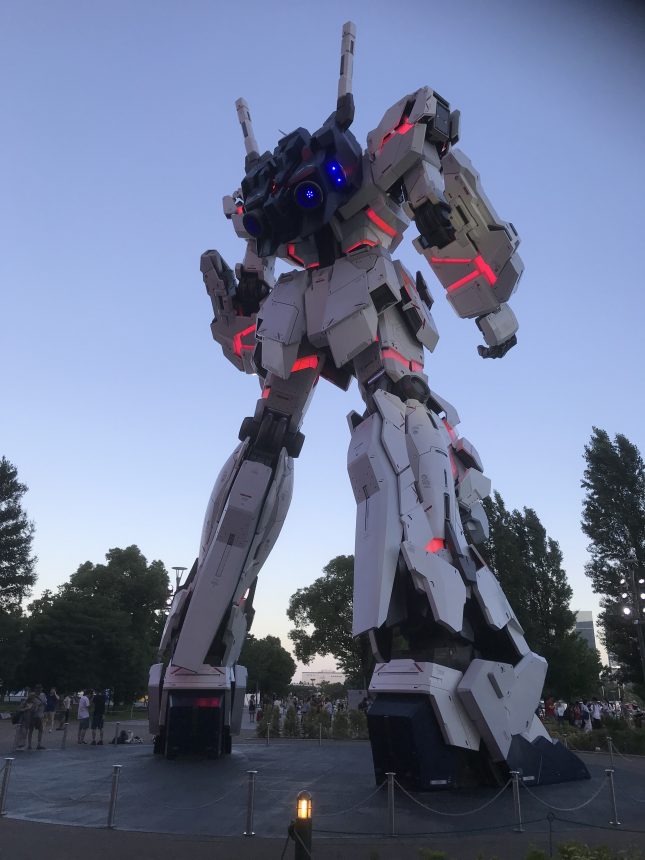 Tokyo Bay has shrunk over the centuries from extensive land reclaiming activities, the shogun did it for the housing of their samurai, while politicians have done it in the past decades for glory and pork barrel. In the late 1980s, grand plans were hatched to create a futuristic mini-city named Oceanfront Sub-city Center on reclaimed land to be inaugurated during a planned 1996 international exposition. It was a massive white elephant and an obvious waste of money, and a newly elected governor of Tokyo canceled the exposition.

The buildings that were already completed, including Kenzo Tange‘s futuristic Fuji TV Building and Tokyo Big Sight, are rather magnificent. The island became very popular with young people, especially young couples who flock to shopping and amusement treats like Joypolis, a virtual reality emporium, Oedo Monogatari Onsen, a theme park with hot spring facilities set in the Edo period culture, Palette Town, a leisure center that includes a giant wheel, and Venus Fort, a Las Vegas-style indoor shopping street with over 150 shops under an artificial sky that change from sunny to gray, violet and stormy depending on the time of the day.

A good view of the island and its futuristic construction can be seen from the driverless monorail that leaves Shimbashi station for the Odaiba and travels via the Rainbow bridge. It is a fun ride that will also give you great views of southern central Tokyo from across the Bay once you’re in Odaiba.

There is a small artificial beach in Odaiba where you can buy snacks in the nearby stores and relax. The water is not the cleanest though, so swimming is not recommended. The view of the city is nice, and in the summer it does get quite crowded on the only beach in central Tokyo. Not too far from the beach, you can also find the Odaiba version of the Statue of Liberty, a local and tourist favorite for a cool picture.

Odaiba is also the stage of many events year-round, like large music and dance festivals, an Oktoberfest, a Christmas event, and much more.

In front of the modern DiverCity shopping center, you can find the life-size statue of one of the most iconic characters in Japanese animation, the giant robot Gundam. First launched in 1979 as a television series, the Gundam Series franchise had great success that also included a manga, movies, and collectible models, among others.  The series unfolds in the future when humans have colonized space and use humanoid combat vehicles called ‘mobile Gundam suits’.

The Unicorn Gundam is the newest attraction of the franchise.  The model is a life-size replica of the RX-0 Unicorn Gundam from Mobile Suit Gundam UC.  The statue is 19.7 meters high.  The Gundam is normally in Unicorn mode, marked with a single antenna protruding from its head.  However, at specific times, you can see the Gundam in Destroy mode. During the transformation, the armor plates move to one side and the unicorn horn, which is actually an antenna, is divided into two and adopts a configuration similar to ornamentation in a samurai helmet.  The process takes about 10 seconds.

There is also a light and sound show, with a projection of the Gundam anime on the screens behind the statue. In addition to the Unicorn Gundam, you can find the Gundam Café just behind the statue.  Despite its name, the cafe has no space to sit.  Instead, they sell snacks and take-away souvenirs with a Gundam theme.  Also next to the statue is a small shop called Gundam Trailer Shop where items related to the franchise are sold.

On the seventh floor of the DiverCity shopping center, there is a larger official store called Gundam Base Tokyo. The Gundam is one of the most important icons of the island of Odaiba and a symbol of the high-tech image of Japan.

If you are thinking about making a trip to Japan, as seasoned Japan experts we can help you create your perfect Japan tour, including destinations like Odaiba. Experienced guides can help you make the most of your limited time in Tokyo and show you all the best this city has to offer, famous highlights as well as lesser-known, more local places. Contact us to start planning your unforgettable holiday to this fascinating country full of once-in-a-lifetime experiences, culture, history, nature, and delicious food!

One of the best experiences that can be enjoyed in Japan at a technological level is the e...
">

Oedo Onsen Monogatari is an onsen theme park and was created to resemble a bathhouse in th...