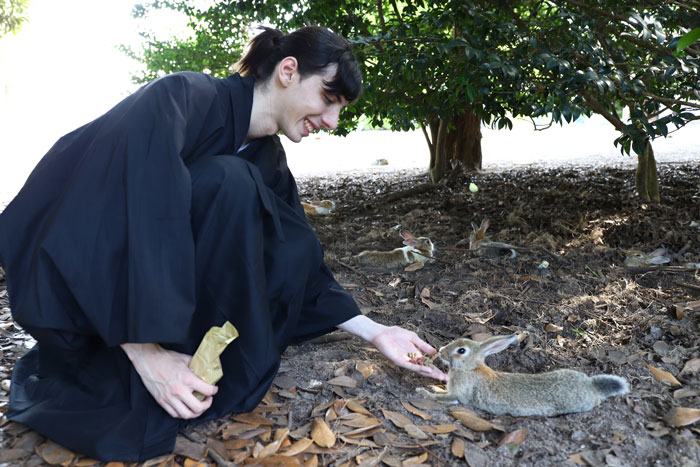 In the prefecture of Hiroshima, in the Takehara area, there is a very peculiar and mysterious island that attracts thousands of tourists a year who want to see its small and tender inhabitants. Its name is “Okunoshima” and is colloquially known as “The Island of rabbits.” Within this island of 700 square meters live around 1000 rabbits in freedom. Rabbits are friendly and affectionate to visitors, on condition that they respect the established rules.

Okunoshima is a beautiful place, with a spectacular view of the sea and abundant vegetation. Rabbits are scattered throughout the territory, so while exploring the place you can find many of these beautiful animals.
Being an island, the only way to get there is through a ferry that leaves from the port of Tadanoumi. The island has a single restaurant that is inside the only Resort Hotel, the “Kyukamura Okunoshima”, where you can stay to observe the beauty of the island with tranquility.

Currently, this place is full of peace and tenderness, but formerly, from 1929 to 1945, a toxic gas factory was installed on the island for military purposes. It worked secretly and, during this time, the island was erased from the maps of Japan. At that time rabbits were also used to test chemical weapons, but in 1945 the Allied forces burned the entire place and annihilated all rabbits.

Today, the island is one of the few places where you can see structures of buildings and parts of storage almost intact. Okunoshima is full of significant places for people interested in history. It also has a museum dedicated to explaining the island’s past, the effects of toxic gas, and the importance of peace. It is said that the rabbits that currently inhabit the island, are the descendants of 8 rabbits released by schoolchildren in 1971. Since then they have been breeding until they reach the amount of today.

In front of the beach, there is a camping area. The island has very few spaces to throw away garbage, there are no convenience stores or auto markets, and therefore it is recommended to take the necessary forecasts. Okunoshima is a fascinating place, where vegetation, history, rabbits, and the sea, become an unusual journey. For those who would like to interact with rabbits and / or see large historical structures almost intact, Okunoshima is the right place. Rabbits, history, nature, and peace.

How to interact with Okunoshima rabbits

Okunoshima, better known as the Island of the Rabbits, welcomes visitors who wish to interact with the tender inhabitants of the Island. For maximum enjoyment, people are required to meet certain standards of behavior and protection, such as:

– If you want to feed the rabbits, please the food must be purchased at the port of Tadanoumi.
-Small animals should not be held in arms or chased. Rabbits are generally afraid of being held and will fight to escape.
Living in nature means that they do not have access to veterinarians in case of injury, therefore, it is crucial that they are left free to minimize the risk of injury.
– It is important to keep in mind that, on the roads, rabbits should not be fed because the roads are traveled with bicycles and, while eating, the rabbits are too concentrated and do not notice traffic.
When trying to escape at the last moment, they can crash into bicycles or even other types of vehicles.
– It is appreciated not to leave food scraps. Rabbits do not eat damp skin or spoiled vegetables. This waste attracts crows. In addition, leaving food near the nest means filtering the whereabouts of baby rabbits to their predators. Nor should they be given food for human consumption such as bread and snacks because they will get sick when ingested. In addition, rabbits cannot digest potatoes.
– Bicycles are required to drive at moderate speed for the reasons stated above.
– It is forbidden to take rabbits out of their habitat and take them home. Under the Wildlife and Game Protection Act, prior permission from the Ministry of Environment is required to capture wild animals. In addition, you can incur expensive treatment fees later, as some rabbits can carry parasites or other diseases. – Do not bring your own rabbits to abandon them on the Island. The rabbits that have remained as pets cannot survive on the island because the rabbits are too territorial and the “strangers” will be harassed and beaten by local people.
– Do not forget to check under your car because there could be rabbits because it is an ideal place to hide from the direct sun and its predators. Be sure to check under your car, as they can remain even after starting the engine.
– Please enjoy the rabbits in peace. Observe them in silence and share your photos online. Let the world know about this mysterious enclave, Rabbit Island.
– Please fill the water bags. Water is scarce, especially around the hotel. Refill the water trays around the island, whenever possible. Rabbits that live on the hillside can feed on natural springs, however, for those surrounding the hotel, these trays are crucial for their survival.

Following these rules, you can enjoy the wonderful experience of being in Okushima, Rabbit Island.

To go to the so-called “Island of the rabbits” you can take one of the following options:

All Kodama Shinkansen (bullet train) departing from Osaka stop at Mihara station. Upon arrival at Mihara station, transfer to the Kure line in the direction of Itozaki to Tadanoumi station.

Upon arrival at Tadanoumi station:

From Tadanoumi station you have to walk approximately 3 minutes to the port, where it is very well specified how to buy tickets to get on the ferry.

Okunoshima being an island, the only way to get there is through a ferry that leaves every 30 ~ 45 minutes from the port. The ferry ride takes approximately 15 minutes.

In the same way you return to Tadanoumi. The last ferry to leave Okunoshima is at 19:15.
Japan Rail Pass is accepted to Tadanoumi JR station but not for ferry services. Only cash is accepted.