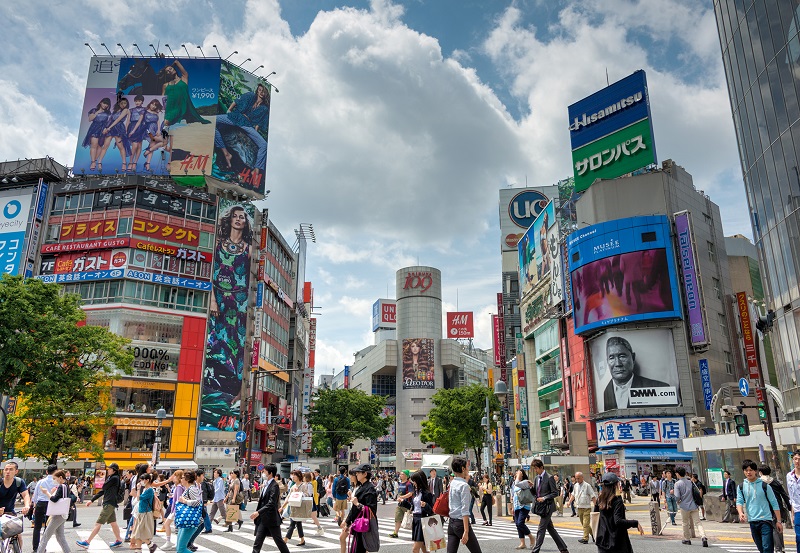 One of the most famous areas in Tokyo is Shibuya. According to the 2008 data, it has a population of 208,371 inhabitants and a density of 13,540 people per km². The total area is 15.11 km². Shibuya literally means ‘bitter valley’ and, it is the name of the descendant family of the Fujiwara clan that resided there until the beginning of the Meiji era (1968-1912).

Today a trip to Tokyo would not be complete without experiencing the great Shibuya crossing. Walking through the rising tide of people flooding the intersection outside Shibuya Station every two minutes is an experience in itself. Make sure to go at a time that it is crowded, as this is one of the few places you actually want to be as crowded as possible to get the full experience. Good times to go are weekend afternoons and weekday evenings between 6 pm-9 pm. Shibuya station handles an average of more than 2.4 million passengers every day which is what makes the Shibuya crossing one of the busiest roads in the world. It is believed that approximately 2,500 people cross it at once.

The origins of the Shibuya station date back more than 100 years, when operations began in 1885. Currently, Shibuya station serves more than eight different lines and is jointly operated by the JR East, Keio, Tokyu, and Tokyo Metro metro companies. Tokyu Corporation, one of the main operators of Shibuya Station, has completed a large part of planned renovations in Shibuya in 2019, making it once again a youthful and modern district. Be sure to check out the impressive Shibuya Stream, Shibuya Scramble Square, Hikarie, and Fukuras buildings when you are here. These high rise buildings are filled with not only regular and shared offices, but also boast shops with the newest fashion, pop up stores, great food markets, trendy cafes, and other entertainment.

Right after crossing the scramble crossing, you will find the birthplace of many Japanese fashion trends, Center Gai. This is a pedestrian zone located in the heart of Shibuya, lined with shops, boutiques, and game centers. At night, the street is filled with young people heading to restaurants, bars, and nightclubs. This is the nightlife district for those aged around 16-25.

The streets of Shibuya continue to mark the dictation of world fashion trends. The iconic building of Shibuya109 is a mecca for teenagers interested in following the latest fashion crazes, while Shibuya Hikarie and Seibu are modern complexes for shopping and visiting sophisticated restaurants. Not only is it a dream for the modern fashionista, if you are a designer or creator you should not skip modern lifestyle megastores Tokyu Hands and Loft, or buy some extravagant souvenirs at discount giant Don Quijote or quirky subculture store Village Vanguard.

Besides fashion, Shibuya is also famous for loyal dog Hachiko’s statue. In 1923 a dog of the Akita breed moved to Shibuya to accompany its owner, Professor Hidesaburō Ueno. This puppy was called Hachiko and accompanied his owner every day to Shibuya station and waited for him until his return. Unfortunately, in 1925 the professor suffered a cerebral hemorrhage during his work and died suddenly. Hachiko, unaware of this sad event, kept waiting for his owner at Shibuya station for the next nine years. Shibuya residents realized this beautiful gesture of fidelity and in 1934 they built a bronze monument in their honor in front of Shibuya station. Hachiko died in 1935 surrounded by Professor Ueno’s family.

Hachiko quickly became a national symbol of family loyalty and love. Two extremely important features in Japanese culture, so the importance of Hachiko cannot be underestimated. Every year, on the anniversary of his death, a ceremony is held at the Hachiko monument at Shibuya station. As the story is so moving, Hollywood has made a movie called Hachi starring Richard Gere about Hachiko’s life.

As seasoned Japan experts, we can help you create your perfect Japan tour, including destinations like Shibuya in Tokyo. Experienced guides can help you make the most of your limited time in Tokyo and show you all the best this city has to offer, famous highlights as well as lesser-known, more local places. They can show you Shibuya in-depth, and take you to places often overlooked by tourists. Contact us to start planning your unforgettable holiday to this fascinating country full of once-in-a-lifetime experiences, culture, history, nature, and delicious food!

Shinjuku is known for its impressive streets full of neon signs. Throughout the territory,...
">

North-west of central Tokyo is one of the most active centers in the city. Being the third...