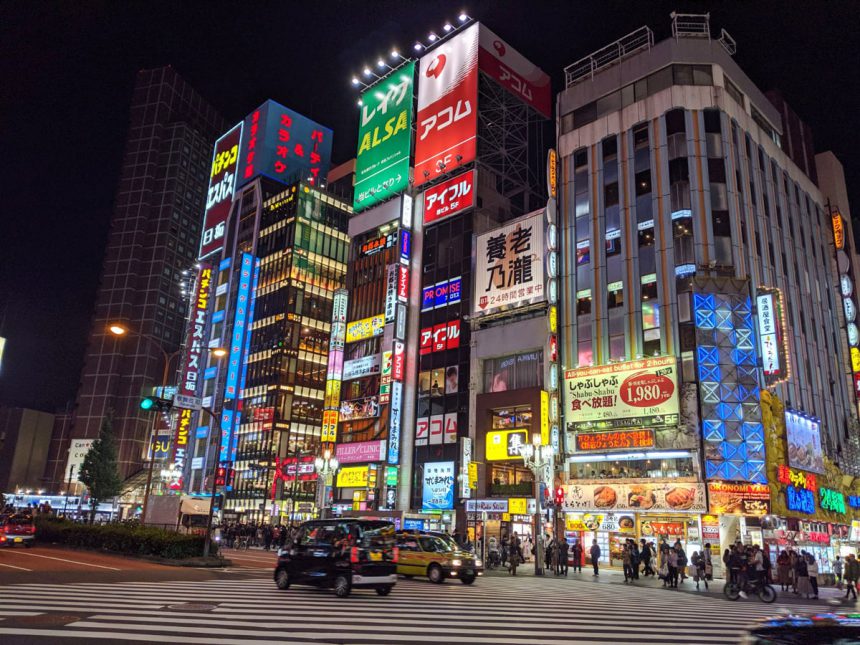 Shinjuku’s foundation dates back to 1636 when several temples and shrines were transferred to the area. The shogun decided to develop this area because traders complained there were not enough places to rest in the area on their long walk from Kyoto to Tokyo and vice versa. Shinjuku also means ‘new inn’, after the function of the area. Besides inns, the red-light business also quickly found its way to Shinjuku as where there are tired men far away from home, there is business to do for prostitutes.

Daimyo (feudal lord) Naito moved to the area as the representative of his province in Edo. Subsequently, his residence became the Shinjuku Gyoen National Park, a beautiful green area that combines garden styles: Japanese, French, and English. A contrast of peace against the backdrop of the hectic city.

Shinjuku really started to grow as a city from 1923, because due to its geography it survived the great Tokyo earthquake. This was the first area in Tokyo where many skyscrapers were built, the ground here is rocky and hard, and that makes for great natural earthquake resistance. Many other parts of Tokyo, mainly the eastern parts, are a lot less quake-resistant because large parts of the city were built on sand and even on very unstable reclaimed land.

In 1945, the United States military forces destroyed 90% of Shinjuku during the great bombing of Tokyo. After the war, the area was quickly rebuilt completely. Its old connection with prostitution is still lingering today, even though prostitution was officially outlawed in Japan in 1957 there are many ways to circumference this law.

Currently, Shinjuku is a cosmopolitan neighborhood full of life and recreation for all audiences and is considered one of the centers of Tokyo along with the original center (Marunouchi and Ginza) and new center (Ikebukuro). The busiest station in the world is located in Shinjuku, with more than 3.5 million passengers in transit every day. A dozen train and subway lines stop at this station, including the important JR Yamanote line. Shinjuku is also one of Tokyo’s main stops for long-distance buses.

In 2008, the estimated population of this neighborhood was 312,418, with a population density of 17,140 people per km², with a total area of ​​18.23 km². The Tokyo Government Building is in Shinjuku, which is where all important city affairs are handled. In this imposing skyscraper, there are two observatories open to the public, where you can enjoy a 360-degree view of the entire city. There is no entrance fee for the observatories. This large government complex has approximately 13,000 employees.

Shinjuku is known for its impressive streets full of neon signs. Throughout the area, there is a wide variety of international cuisine and hundreds of department stores ranging from clothing stores to stores for high-tech devices. Shinjuku is almost always full of people, so it is a great place for taking pictures, especially in the evening.

Kabukicho, the largest red-light district of Tokyo is also in this area. It is named so because the original plan was to build a great Kabuki theater, but although it was eventually never built, the name was kept. Kabukicho boasts is a vast amount of restaurants and bars. There is also the Toei cinema building, on top of which you can spy a giant replica of the famous Godzilla monster. Kabukicho is especially known for its extensive network of places dedicated to sexual consumption; girls bars, adult stores, love hotels, host and hostess clubs, etc., therefore, it is not recommended to enter any establishment here without the company of an expert.

There are many tourist attractions in and around Kabukicho that are not only for tourists, and many local people also come to enjoy themselves. A 5 minutes’ walk from Kabukicho, there is an area called Shinjuku Golden Gai with hundreds of small bars. Most of the bars have only several seats, but you can enjoy the cozy atmosphere. E-Sports Cafe opened in 2016. It was one of the first e-sports cafes in Japan. There are 80 high-spec computers in the cafe. And don’t forget Robot Restaurant where you can enjoy the exciting show with robots and dancers.

If you want to experience a slice of Tokyo’s nightlife and best food, it is a good idea to book a private guide who can take away language barriers and take you to the best places in this maze of tiny side streets. This is especially recommended for foodie heaven Omoide Yokocho, nicknamed Piss Alley for the obvious reason. While it started out as one of the many black markets that sprung up all over Tokyo just after the war ended, once the economy started booming it quickly turned into a network of narrow streets chock-full of tiny izakaya and noodle restaurants. Many of the buildings have two floors, and if you don’t know where to go chances are you will miss the best little restaurants. It is a great Showa era experience to dive head-first in Omoide Yokocho, and you’d better make sure to come hungry as the food tends to be amazingly cooked by very experienced chefs.

If you want to experience a slice of Tokyo’s nightlife and best food, it is a good idea to book a private guide who can take away language barriers and take you to the best places in this maze of tiny side streets. As seasoned Japan experts, we can help you create your perfect Japan tour, including destinations like Shinjuku. Contact us to start planning your unforgettable holiday to this fascinating country full of once-in-a-lifetime experiences, culture, history, nature, and delicious food!

North-west of central Tokyo is one of the most active centers in the city. Being the third...
">

The Shinjuku Gyoen National Park is a large green area with beautiful landscapes that prov...