Hirosaki Castle stands in the middle of Hirosaki city. It is a very important castle because it has one of the only 12 original main keeps which exist in Japan.

Hirosaki developed as a castle town from the late 16th century. Oura Tamenobu came here as a feudal lord by the order of Toyotomi Hideyoshi who was the military leader at that time. He made Oura Castle. He changed the family name from Oura to Tsugaru, so since then, his territory was called the Tsugaru domain. He moved to another castle, Takaoka (Horikoshi now), but it wasn’t a good location as a military base. So he built a new castle in Hirosaki after Tokugawa became shogun in 1603. The construction of the castle was finished in 1611 at the time of 2nd lord, Tsugaru Nobuhira.

In 1627, there was an accidental explosion of gun powder in the castle, and the main keep was destroyed. Since then, there was no main keep for nearly 200 years. In 1810, they finally reconstructed the main keep with permission from the shogunate, which has remained until today. It has 3 layers and 3 stories.

The Tsugaru family always played a major role in politics and economics in the region until the shogunate was abolished in 1867. By the Castle Demolishing law, Honmaru (the main palace) and many other buildings were demolished but fortunately, the main keep survived and was designated as a National Treasure in 1937. 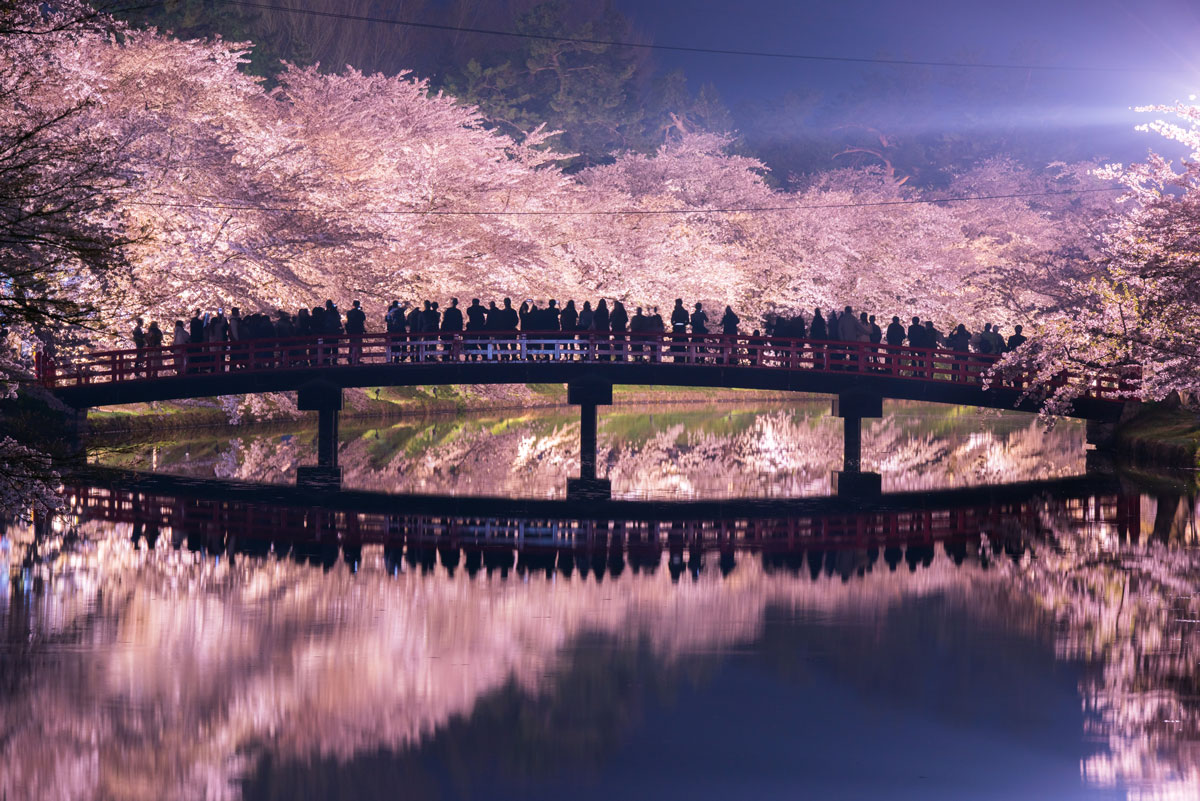 Once you have exited Hirosaki Station and have left the busy area crowded with shops and hotels, you will come upon tranquil streets with a little stream called the Tsuchibuchi-gawa, where you will suddenly feel like you were transported to the past glory of the castle town. The Hirosaki Castle Ruins with its castle tower are now open to the public as Hirosaki Park. The park is surrounded by three moats, which were made for defense. There used to be guards at every crossing bridge, so it was not easy to approach to the main keep.

If you take the bus from Hirosaki Station, you should get off at the Shiyakusho-mae (city office) bus stop. You will enter from the Otemon Gate which used to serve as the main gate. When you cross the third bridge, you will finally find the main keep on the stone wall facing the moat. Since 2015 the main keep has not been standing at the corner because they moved the whole main keep building by raising and pulling it in order to restore it. The restoration work will last until 2023.

The view is best if you look at the main keep from the moat, as it looks very simple if you view it from the other direction. It is said that this is how the castle passed the examination by the inspector from the shogunate, who was there to make sure the castle was not too elaborate. When they finished the construction the inspector came, but they didn’t show him the main keep from the moat, but only from the other direction. He fell for it because he traveled by closed palanquin.

The garden is especially beautiful during the cherry blossom season. Because it is located in the north, its main season is normally from late April until early May. It is said that one of the former feudal retainers planted 1,000 cherry trees in the park. This was the beginning of the area’s fame as one of the best cherry blossom viewing places in Japan. On a sunny day, you can take a nice picture of the castle with cherry blossoms and a beautiful snow-covered Mount Iwaki as a background.

Hirosaki is known as Sakura city, and you can enjoy beautiful cherry blossoms around Hiros...
">