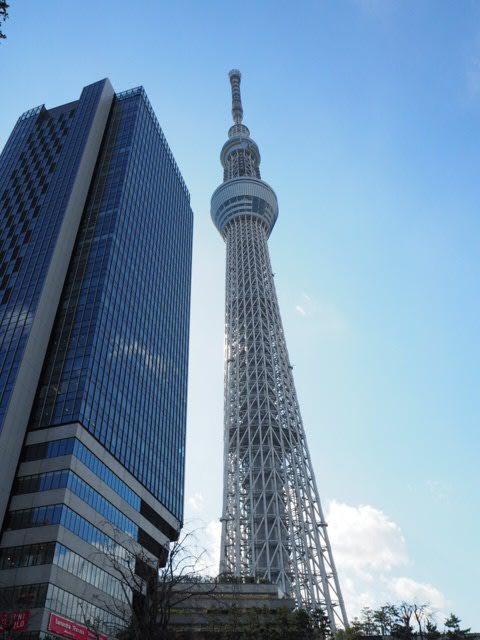 The Tokyo Skytree is the holder of the record for the world’s tallest tower. Along with becoming a major tourist attraction, the structure’s main purpose is as a television and radio broadcasting tower. Tokyo‘s formal broadcasting tower, Tokyo Tower, is 333 m (1,093 ft) tall and is no longer tall enough to give complete digital terrestrial television broadcasting coverage because it is surrounded by many high-rise buildings.

The Skytree was confirmed by Guinness World Records in November of 2012 as beating the record previously held by the Canton Tower in China, which stands at 600m (1,968 and a half feet) high. The tower features seismic proofing as well which is a nice security measure to make visitors feel more comfortable. For those looking for a good place to view the city of Tokyo from above, the Tokyo Skytree is the perfect place to do it. The Tokyo Skytree Tower is tinted an original color, ‘SKYTREE White’, representing harmony with the surrounding scenery, its name, and the design concept: ‘The creation of city scenery transcending time: A fusion of traditional Japanese beauty and neo-futuristic design.’

Tokyo Skytree was designed by Nikken Sekkei architectural firm, and construction began in 2008. A core column of reinforced concrete, encasing elevator shafts and an emergency staircase, is surrounded by a framework of steel tubes. At its base, the framework takes the shape of an equilateral triangle with sides of 223 feet (68 meters), but as the tower tapers, the cross-section gradually becomes circular. The core column extends only to the height of 1,230 feet (375 meters) and does not support the tower. Instead, above 410 feet (125 meters) it is connected to the steel framework by flexible oil dampers that act as shock absorbers. Under earthquake conditions, the core column is intended to counteract any sway of the tower.

Tokyo Skytree has two observation decks that are both accessible to the public. One of the decks is at 350 meters up, and the other is at 450 meters up. Each deck features different shaped windows, providing a slightly different view. On Floor 340, there is also a glass floor for those who are feeling a little bit bolder.

Tokyo Skytree actually has a variety of things you can do at the base of the tower. There is an aquarium, planetarium, various restaurants, and shops. After paying the entrance fee, you can enter the actual tower and make your way to the speedy elevators to go up and enjoy the view. Although the primary use for the tower is as a broadcasting tower and as a lookout point, tourists can also enjoy the restaurants and cafes within the tower, as well as a little shop. On foggy days, the tower offers a VR visual panoramic view to compensate for not being able to actually see the view below.

Tourist hotspot Asakusa with the famous Sensoji temple and Nakamise street is within walking distance of the Skytree.

Hidden within a magnificent shopping center in Odaiba is an attraction that is for those w...