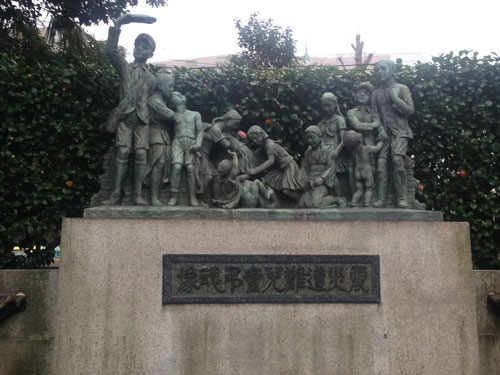 Ryogoku is a district of Tokyo known for being the heart of Japanese sumo wrestling. In this area, if you are lucky you can spot sumo wrestlers walking on the streets going about their regular day. Another famous place in this district is the great Edo-Tokyo Museum, a huge building that takes the visitor step by step through the construction of the Tokyo we know today. But there is also a sacred and important place called ‘Yokoamicho Koen’. This is a park located a few meters from the Ryogoku station and it was founded in 1930 then rebuilt after the war in 1951.

In the park enclosure, there is a large, semicircular sculpture with a work of art made with flowers forming pigeons of La Paz. In this sculpture, there is a small room where the names of more than 100,000 victims of the bombing of Tokyo by the US forces are written. The sculpture was created in 2001 by sculptor Kimio Tsuchiya as a peace monument commemorating the victims of Tokyo of WW2.

In the center of this spacious park is the beautiful Tokyo-to Ireido, the Tokyo Metropolitan Area Rest Center. It is a very particular enclosure since the back of the enclosure has a three-story Buddhist-style pagoda that measures 41 meters in height. The front is very similar to the entrance of a Shinto shrine. The interior of the enclosure looks like a Christian church.

There are two other monuments in the park as well, one is for the children that died in the earthquake of 1923, and one for the Korean victims of the riots that happened after the earthquake.

Tokyo-to Ireido has a history that dates back to 1922 when the Tokyo government bought the land to make the park, but due to the great Tokyo earthquake in 1923, thousands of people died here. They ran desperately for this new place but in the afternoon a giant tornado of fire formed that incinerated the 30,000 people who were there. This was the first disaster that happened here.

In 1930 the Rest Center for earthquake victims was opened. Then in 1945, the United States carried out the bombing of Tokyo, which became the most destructive non-atomic bombing in the history of mankind. This was the second disaster in this area. This is a little known fact since people mainly refer to the atomic bombings of Hiroshima and Nagasaki when referring to bombings of WW2.

41 km2 of the center of Tokyo was destroyed, without discriminating between a sanctuary, historical sites, hospitals or houses. The bombings left approximately 105,000 civilians dead (more than the first figure of the atomic bomb in Nagasaki) and 1,000,000 homeless. Between 1948 and 1951, the ashes of 105,400 people killed in Tokyo were buried in the Yokoamicho Koen park.

Inside the Tokyo-to Ireido, there are paintings on both sides of the building reflecting what happened both in the great earthquake and in the great bombing of Tokyo. In the center, there is a place to put incense and pray for the peace of the victims. There is also a small room with a movie explaining the history of the park.

Just behind the La Paz monument, there is a small but very beautiful Japanese garden, ideal for those who want to seek the tranquility that characterizes these gardens. The site, despite having a tragic history, is a serene place. The park and its buildings are really impressive. A commemoration of the victims of the Tokyo bombing is made every March 10.

There is also a museum on the park grounds with English explanations of what happened during both the earthquake and the bombing. There are many photographs of the aftermaths, and materials found after the fires. There is no entrance fee.

A visit to this park is recommended for those who want to learn more about what has happened in the history of Tokyo.

In the heart of the Japanese sumo wrestling city of Ryogoku is the acclaimed Edo-Tokyo Mus...
">

In the traditional area of ​​Asakusa in Tokyo, about 20 minutes walk from the famous Senso...