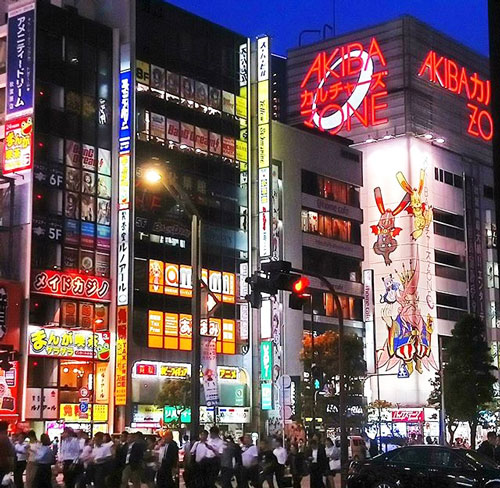 Animate opened in 1983 and is Japan’s biggest anime store chain. Their first store opened in Ikebukuro which is known as a town of subculture hobbies as well as Akihabara. Animate sells a wide variety of anime goods including comics, light novels, dojinshi (self-published magazines), CDs, DVDs, character goods, figures, video games, trading cards, and costumes. They often hold events inviting anime voice actors and anime song singers so the fans can get up close and personal with their idols.

Animate even created its own character and has been writing comic stories such as ‘Anime Tencho (Anime Store Manager)’. Interestingly, the president of Animate appears in the story. Its characters also collaborate with other popular comics such as ‘Laki Suta (Lucky Star)’.

Animate currently has about 120 shops all over Japan. There is no prefecture in Japan without Animate. So, if you miss visiting the flagship stores in Tokyo, you will still have a chance to go in other cities. They also opened stores in foreign countries including China, South Korea, Taiwan, Hong Kong, and Thailand.

To diversify their business, they have been developing new types of shops. For example, other than the good shops Animate now also boasts in-house restaurants and coffee shops. These food and drink establishments then collaborate with popular comic publishers and serve original character-themed foods and drinks. If you come to Japan as a tourist, having a drink in a themed cafe should definitely be on your to-do list.

They also started a shop called ACOS which specializes in anime costumes where cosplay events are often held. Of course, you will want to have good pictures when you take the effort to dress up beautifully, so these shops come fully equipped with photo studios called Hakostadium, which prepare a variety of backgrounds such as classrooms, a witch’s room, typical Japanese rooms, and gorgeous western rooms for you to use.

If you are thinking about making a trip to Japan, as seasoned Japan experts we can help you create your perfect Japan tour including subculture destinations such as Animate. Contact us to start planning your unforgettable holiday to this fascinating country full of once-in-a-lifetime experiences, culture, history, nature, and delicious food!

North-west of central Tokyo is one of the most active centers in the city. Being the third...
">

Are you a One Piece fan, or looking for an old Godzilla figure? Would you like to buy your...