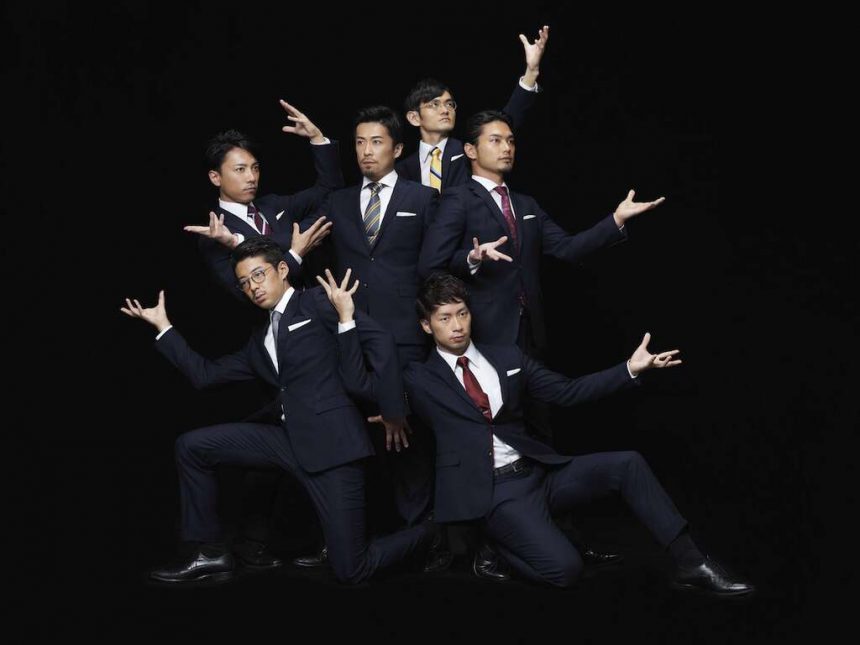 In the wide variety within the Japanese music industry, there are two acts that expose the culture of Japan in a very characteristic way. Their way of dressing, making videos and the lyrics that they compose have earned them the categorization of avant-garde artists.

World Order is a Japanese band composed of 7 members, and it was formed by Genki Sudo after his retirement from mixed martial arts. That was in Tokyo in 2009. By combining a parodic style that incorporates a stereotypical image of industrious Japanese entrepreneurs that people from other countries have, pop and sensitive dance music, and dance performances taking advantage of their excellent physical abilities, World Order has developed a particular style. Their unique and unprecedented view of the world has gained broad support in Asia, North and South America, and Europe, with enthusiastic fans.

As it was not easy for Sudo to be accepted as a musician because of his public image as an athlete, he decided to create a different style that was completely opposite to his athletic style. First, he recruited 4 and then 6 members, to serve as a team. The World Order Project where Sudo composed and sang the lyrics, with the support of 6 highly qualified dancers who shared his vision, was born.

The unique concept of World Order includes extremely complex, perfectly synchronized choreographies and sticky and stimulating music. Its visual image, always in business suits, is a reference and parody of the cliché perception of the average Japanese, which many foreigners have. In the words of Sudo: “Turn the stereotype into something great”.

Most of its videos are taken on the streets, in front of clueless passersby whose spontaneous reactions create an important ingredient in his works. Its attractive concept called immediate attention on the internet and some of their videos have reached more than 10 million views.

They have recorded all over the world, the United States, Mexico, the United Kingdom, France, Germany, China, India, South Korea, Thailand, and Taiwan. More than being just dancers, each member has various artistic abilities, such as drawing, photography, video, music, acting, and even cooking and, although labeled as a ‘boy group’ by certain means, World Order represents great melodies and movements. Their work is edifying, positive, and promotes a universal message of peace, tolerance, and understanding.

“Through its dance and humor, the group’s distinctive form of expression is partly a political message and partly a social comment. Always impeccably dressed in business suits, this team has the mission of inspiring others, changing for the better, and spread the message: We are all one.”

The band was formed by the lead singer, Yuko Suzuhana. She had been dancing mai, a traditional dance, since the age of 5, when she also started singing shigin, traditional vibrato poem songs, along with instruments such as the koto, a flat colossal harp, and the shakuhachi, a bamboo flute.

For Suzuhana, from a very young age, it was her dream to spread the greatness of traditional Japanese women using shigin and wagakki to many people. Hence also the rods in the hair (kanzashi) and, especially, her decision not to sing in English but in Japanese.

The band also embarked on their first promotional tour in the United States. Their second album, Shikisai, which included “Kishikaisei”, was released in 2017. That year they also aired the compilation of great hits. Currently, for their original videos, the band has managed to get millions of visits to their musical works on YouTube. Wagakki has completed tours of several countries.

Wagakki Band is a band that expands knowledge about traditional Japanese culture, but with a current touch that makes it accessible to all audiences.

If you are thinking about making a trip to Japan, as seasoned Japan experts we can help you create your perfect Japan tour, including expert guides who can add to your holiday with their extensive knowledge on topics such as J-pop music, other subcultures, and Japanese culture. Contact us to start planning your unforgettable holiday to this fascinating country full of once-in-a-lifetime experiences, culture, history, nature, and delicious food!

Super Potato specializes in those nostalgic games that meant the childhood of today's adul...
">

Anime is one of the most important modern cultural facets of Japan. The word 'anime' comes...