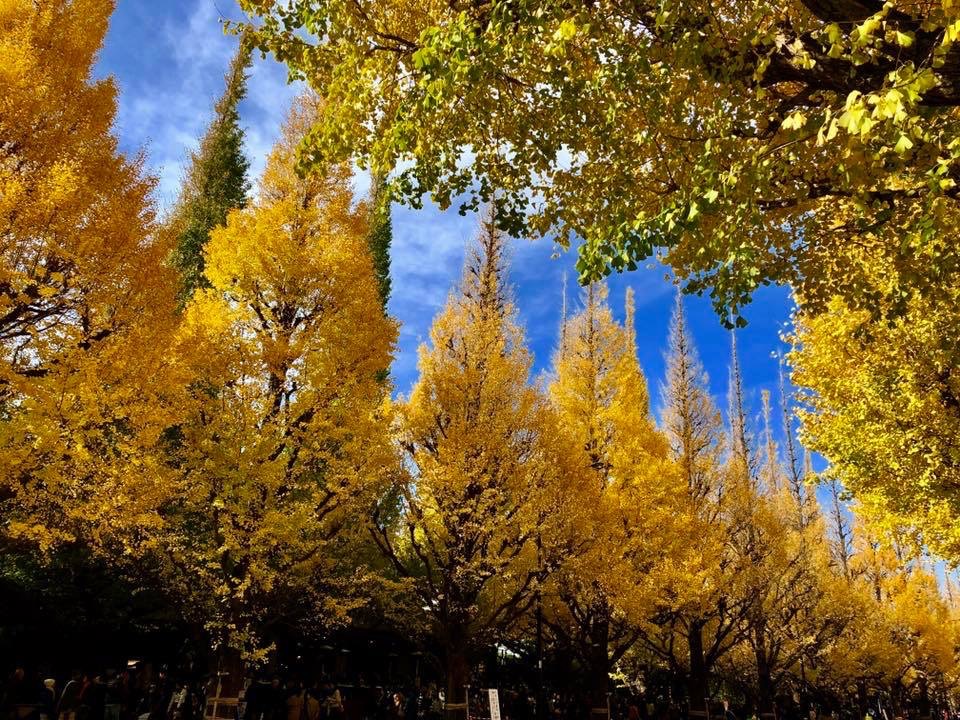 The fall season is a yet underappreciated tourist season in Japan. After the worst of the summer heat and humidity disappears, it still stays pleasantly warm for quite some time in Tokyo and Kyoto. It is usually not too rainy, apart from a typhoon here and there. Typhoon season ends around November, so that would be the perfect timing for a visit to Japan.

The colorful autumn leaves are the main attraction at this time of year since the whole country bathes in their warm hues. There are also numerous special events that are held throughout Japan in the fall, including some related to important food events, Japanese festivals (matsuri), and even Halloween parties.

The 300-meter-long ginkgo-lined avenue at Meiji Jingu Gaien is a celebrated spot for admiring golden autumn foliage. The Jingu Gaien Ginkgo Festival, timed to coincide with the peak of the ginkgo season, attracts large crowds with family events as well as stalls offering gourmet food and fine merchandise.

Held at Komazawa Olympic Park from late October to early November, the Tokyo Ramen Show is one of Japan’s largest outdoor events dedicated to ramen noodles. Every region of Japan has its own distinct version of ramen, some are long-established and others have been invented only recently, and all variations use local ingredients to revitalize the community.

Autumn is one of the most beautiful times of the year. The whole country is slowly covered by red, yellow, and orange colors. If you plan to go to central Japan (Tokyo, Kyoto, Hiroshima), the best time to see this spectacle is mid-November to early December.

When it comes to autumn leaves, traditional Japanese gardens are one of the best places to enjoy the colorful tones of autumn. The impressive mix of fall colors and Japanese Zen gardens can only be enjoyed during this season. In addition, in many gardens, there are illumination events in the evening. This is only this time of the year that the gardens will be open until late.

The fall season doesn’t just see one, but two of the six Grand Sumo Tournaments. The September tournament is held in the Kokugikan in Tokyo, and the November tournament takes place in Fukuoka (Kyushu). Attending a Sumo tournament is one of the most special and extraordinary experiences you can enjoy in Japan. We recommend you reserve your tickets in advance, you can always contact us for advice.

Magnificent illuminations pop up everywhere in Japan once the days get shorter and the nights get longer. They are one of the main attractions during winter in Japan, but if you come in November you can already catch many of them. Illumination events tend to get crowded from December, so if you can see them a bit earlier it is even better. Cities like Tokyo and Kyoto have many areas where they exhibit extensive illuminations and some areas are completely dedicated to illumination events such as Tokyo Mega Illumi or Nabana no Sato Flower Park near Nagoya.

Apples and kaki (persimmons) are known as the ‘fruits of autumn’ in Japan because of their season which lasts from October to December. If you travel to Japan at this time, take this opportunity to taste the juiciest and most flavorful apples and kaki you will have ever had.

It can be said that roasted sweet potatoes remind the Japanese people of autumn. Street vendors pulling carts and selling roasted potatoes are a typical sight of autumn in Japan. If you have been to kindergarten or elementary school in Japan, you will have definitely have plenty of experience going digging for sweet potatoes with your classmates and eating sweet potato-inspired dishes at home for the next few weeks.

Kabocha (Japanese pumpkin) is a type of winter squash with a tough green skin and orange flesh. They can be bought whole, or in halves, quarters and slices. Kabocha is full of nutrition and has a full, sweet flavor, so it is definitely recommended to try some while you are here.

If you are thinking about making a trip to Japan, as seasoned Japan experts we can help you create your perfect Japan tour in autumn. Contact us to start planning your unforgettable holiday to this fascinating country full of once-in-a-lifetime experiences, culture, history, nature, and delicious food!

It is highly recommendable to come to Japan in the period between early November to early ...
">

Hiraizumi flourished for nearly one hundred years, during a peaceful era of prosperity. Ho...
">