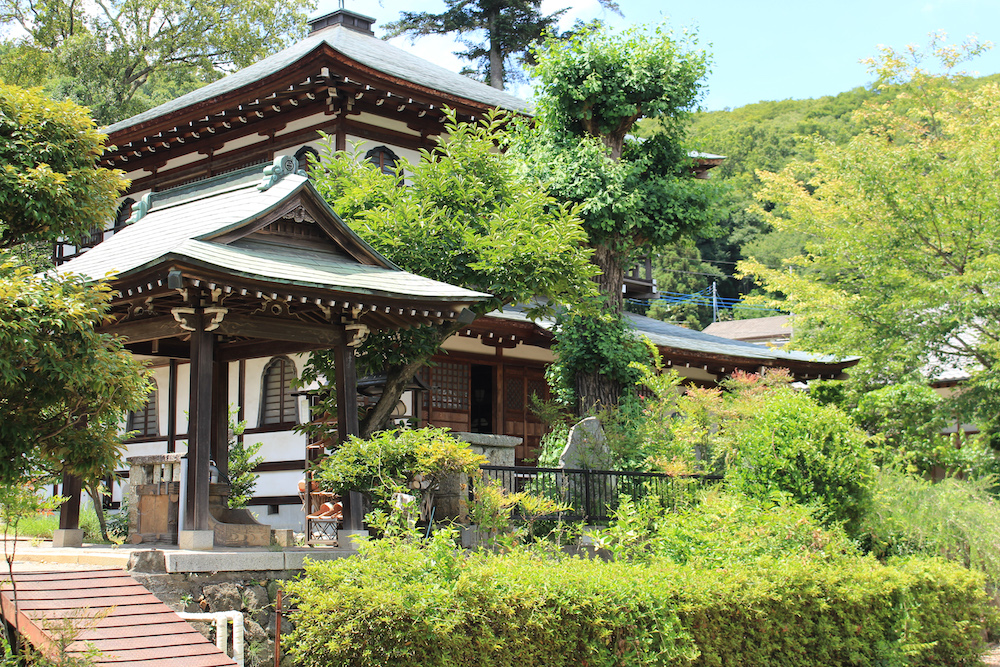 While Japan’s first main religion is Shinto, the second main religion is Buddhism which was imported in Japan with the silk route. It originated in India and came to Japan through China and Korea and thus has many influences from Chinese and Korean style Buddhism and Buddhist architecture. Around 69 percent of Japanese people say they participate in Buddhist rituals, which is nearly the same as the percentage that says they participate in Shinto rituals. Indeed, most people participate in rituals of both religions and don’t clearly identify with just one of the two religions.

Buddhism came to Japan in the middle of the 6th century. Supporters of Buddhism won a victory in the political power struggle of that time. Building temples in every area under government patronage, it spread throughout the country. In the Kamakura period that lasted from 1185 to 1333, as a number of new Buddhist leaders appeared and deepened the religion’s philosophy, Buddhism became mainly about saving the weak. Zen Buddhism was brought to Japan in the Kamakura period by a monk who studied Buddhism in China, and it flourished principally as the religion of samurai warriors.

At present, the culture in Japan that has Buddhism as its backdrop has its roots deeply in the lives of the people and, together with Shinto, forms the spiritual culture of the Japanese people. Also, even today new sects of Buddhism keep emerging and gaining believers.

A Buddhist temple is a place where monks and nuns reside to practice ascetic exercises and hold Buddhist ceremonies, and where Buddhist images are enshrined. At the entrance of a temple, you will often see a two-story temple gate behind which there are buildings such as the main hall, an auditorium, a pagoda, and a bell tower.

While birth and marriage are in general associated with Shinto rituals, almost every Japanese person will have a Buddhist funeral ritual. One of the reasons for this is that Buddhists believe in a potentially good hereafter, while Shinto believes in a kind of underworld that you go to in your afterlife which sounds decidedly less attractive. Therefore, graveyards in Japan are generally located on temple grounds. People go to temples during Bon festival and equinoctial weeks for making visits to the grave of their ancestors, and relatives gather on the anniversaries of deaths and have monks recite sutras in the temple.

Temples are not only visited by Japanese people for these solemn circumstances only though, and they visit temples for the pleasure of appreciating the beautiful structures and the Buddhist images just like foreign tourists do.

Juzu -Buddhist rosaries- are held in the hands when praying to Buddha or while counting the number of times, by touching the beads, that Buddhist prayers (sutras) have been recited. It is similar to the Catholic rosary. Juzu are held in the hands when worshipping Buddha and also when paying respects to the spirits of the dead upon visiting their graves. There are usually 108 Juzu beads which are said to remove the 108 worldly desires cited in Buddhist teachings.

Jizo statues, who are guardian deities, are though to protect all living things in the world from the time when Buddha died until the time when the Benevolent Bodhisattva will appear. In Japan, stone Jizo statues, usually about one meter high, are erected as boundary gods at the boundaries of towns and villages and at crossroads.

Jizo are said to rescue the spirits of children when they die and have even been erected at the actual spot where traffic accidents with children have occurred. Most people today feel a closeness to Jizo, fondly calling them Ojizosan.

A long time ago, when Buddhism arrived from abroad while Shinto was already there, Shinto and Buddhism already occasionally came together in a synthesis. This is called Shinbutsu-Shugo. Because Buddhism is not a theistic doctrine and Shinto principally worships nature, there are no contradictions in synthesizing them. This tendency has continued for a long time after Buddhism was introduced in the 6th century, with Shinto shrines supporting the construction of Buddhism temples.

When Japan began to function as a modern nation-state in 1868, Shinbutsu-Shugo became prohibited because the government set a policy of strengthening Shinto in order to support nationalism, but now once again it is quite common to set up both Buddhist family altars and Shinto family alters in the same house or to have a wedding with Shinto rituals and funerals with Buddhism rituals within the same family.

The seven luck gods, Shichifukujin in Japanese, are the seven gods that bring good luck to individuals, families, and companies. They are representative of gods and holy persons in Buddhism, Shintoism, and Taoism and are often drawn sailing a treasure ship together. It has been said that people in Japan, following the story of seven holy men in ancient China, put together seven gods of good luck and came to believe in them.

The Shichifukujin became widely known in the Muromachi period that lasted from 1333 to 1573. Nowadays, at temples and shrine with a Shichifukujin connection, people pray for a long life and family well-being, and a merchant who is hoping for business success will display a Shichifukujin picture in his shop.

Zen Buddhism was introduced to Japan by Japanese monks who studied zen Buddhism in China in the early 12th century. It emphasizes gaining enlightenment through zazen (meditation while sitting still on the floor) and daily chores called samu such as raising vegetables, cleaning, cooking, etc. One of the most important differences between Zen Buddhism and most other forms of Buddhism is how Zen Buddhism emphasizes reaching the state of enlightenment in the current life while still alive, where other forms of Buddhism emphasize reaching that state after one of your next lives and after death.

Thoughts of zen such as ‘to know one has enough’ have deeply influenced Japanese customs, ways of lives and culture such as tea ceremony, ikebana (flower arrangement), Japanese gardens, etc.

Shinto Shrines and Buddhist Temples by one of our guides

Koyasan is a center of Buddhist study and practice, located in the northeastern part of Wa...
">

More than 1200 years have passed since the founding of the Kiyomizu-Dera temple. Situated ...
">

This former family temple of the shogunal family during the Edo period is a must-see if yo...