Geisha: The Entertainers of Japan 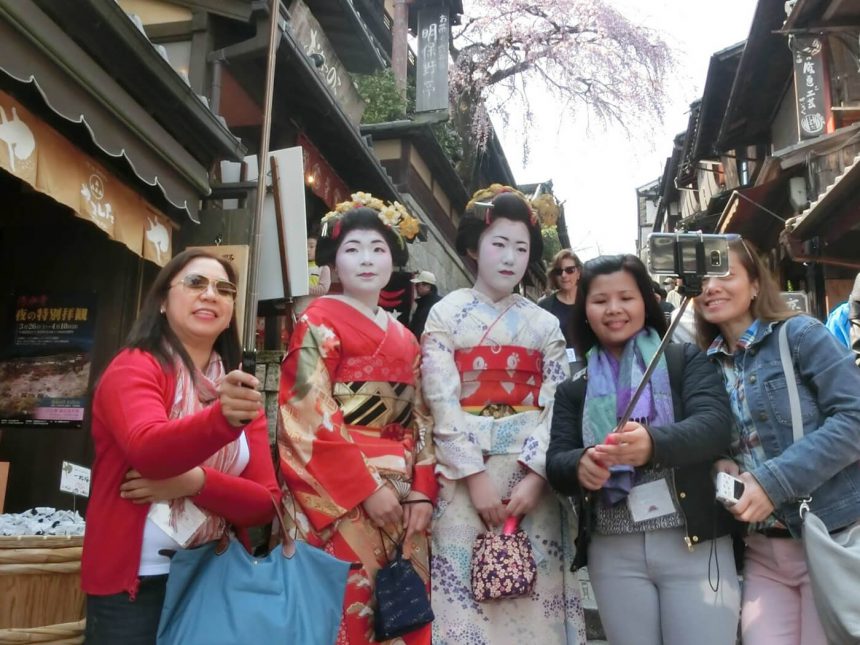 Geisha are traditional entertainers of Japanese arts and music specializing in Japanese dance, song, conversation, and a variety of traditional instruments including the hand drum, shoulder drum, shamisen, or Japanese flute. Traditionally, a geisha’s face was painted white to illuminate their beauty in the candlelight. They train hard from a young age and throughout their career, are highly skilled, and some of the older geisha are even ‘living national treasures’, the highest status for artists in Japan.

Geisha are not prostitutes. This is a misconception based on inaccurate depictions in films and from the stories of American soldiers who went to Japan after WW2 when there was great poverty in Japan and prostitutes either masqueraded as or were mistaken for being geisha. Geisha emerged during the early 16th century to provide entertainment in the form of the arts in the pleasure districts for those who did not want to pay for sex. Laws were actually drawn up to prevent geisha from stealing prostitutes’ clients.

Also, sometimes foreign visitors confuse the geisha with the Edo period courtesans named ‘oiran’. The oiran were the superstars of the Edo period, being high-class courtesans. While geisha are artists who entertain and take customers to a wonderful and secret world. In actuality, the oiran no longer exist, but the geisha still do.

Geisha are cultured independent businesswomen with their own customer following, some of whom have been patrons for decades, and they often manage younger geisha too. Like any Western artist, musician, or actress, they can and do fall in love and have relationships, but this is always entirely a private matter and never part of the job.

The word geisha literally means ‘artist’, although in Kyoto they use the term ‘geiko’ which means ‘woman of art’.
Geisha are called out to tea-houses or to events, functions, and parties, to entertain high-end clientele. In Japan, geisha also perform at large public events and annual dances, but the former tradition of small-scale private entertainment, where customers have a private meal at a tea-house with friends or acquaintances and call in geisha to entertain them as they eat and drink is what they are predominantly famous for.

Opposite of what most people think, the first geisha were actually men, known as taikomochi. They resembled modern-day comedians, storytellers, and musicians. Many people believe geisha are submissive and subservient, but the opposite is true. Geisha are expected to be lively entertainers and are also expected to be capable of conversing with customers on a wide range of topics. Geisha have to read newspapers daily to keep up to date with current affairs so they can make engaging conversation with influential clients.

A geisha’s time was traditionally measured by the number of incense sticks that were burnt during entertainment instead of using a clock.

If you want to have a chance to see a geisha while you are in Japan, your best bet would be to go to Gion when the evening starts to fall. Gion is the place where famous geisha live and work. The okiya are the living quarters of the geisha. There they live in private rooms and this is where they prepare before going to work in the ochaya. Generally, the okiya have a person who leads them, and this is usually an older geisha, already retired, who is usually called “Mother” by the younger geisha. Today there are variations of this tradition and it depends on the okiya who directs it how the geisha have to live.
Ochaya literally means ‘Tea Shop’, and it is where customers go to interact with geisha. Having the contact information of a geisha is a luxury that only people with connections in the city or people with a good budget can enjoy. In private rooms, the geisha entertain guests with dances, songs, board games, and interesting conversations.
Geisha are a living work of art, and therefore must be respected as such. In the district of Gion, you can find the Gion Corner where you can see a musical show performed by real Geisha if you want to see them in action and don’t have the very deep pockets that an up-close and personal meeting would require.
Today, geisha are seen as modern-day celebrities in Japan. Popular with tourists and business people alike, modern-day geisha support an entire industry within the eco-tourism industries of Japanese cities. They provide work for artists in all of the traditional skills of music, dance, calligraphy, who train the geisha in their crafts. Geisha also buy top-of-the-line traditional products such as kimono, umbrellas, fans, shoes, and the sort, keeping craftsmen in work and preserving their knowledge and history for years to come.

Today Asakusa is festive and quaint. The crowds are drawn by Sensoji Temple, the Five Stor...