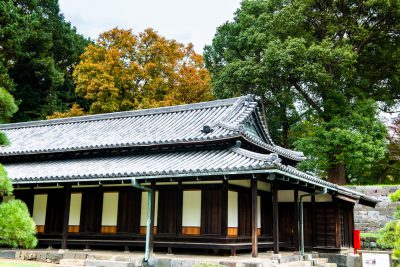 Japan has the oldest continuous monarchy in the world. According to mythology, the first Emperor of Japan, Emperor Jimmu, is descended from the Goddess of the Sun Amaterasu and he was enthroned in 660 BC. It is commonly accepted that the Imperial Family has reigned Japan for more than 1500 years and that all have descended from the same family. In Japan, the Emperor is never referred to by his given name but is referred to as ‘His Majesty the Emperor’ ( Tennō Heika) which can be shortened to ‘His Majesty’ (陛下 Heika).
Even though the political power of the emperors has always been limited and often even just symbolic throughout most of Japan’s history, all the non-royal rulers (shoguns) have respected the Emperor and strived to have imperial approval for their position as rulers. With the Meiji Restoration of 1868, the last shogunate was overthrown, and Emperor Meiji became the head of state. Under the new Meiji constitution, the Emperor had sovereign power, and his political and military power was theoretically close to absolute. The constitution of the postwar period of 1946 establishes that the emperor has only a symbolic function. Now the Emperor participates mainly in ceremonies and diplomatic meetings but has no political power.

His Majesty Emperor Emeritus (Akihito) acceded to the throne on January 7, 1989, after the death of his father, Emperor Showa (Hirohito), and officially became the 125th emperor of Japan on November 12, 1990. During his reign, he made great efforts to promote peace in the world and he was deeply involved with current Japanese society.
The first opportunity he had to express what he wanted to say to the Japanese people was when a volcano erupted in southwestern Japan in 1991. The imperial couple visited an evacuation center and knelt by the victims. This act of kindness wasn’t met by approval from everyone in the Imperial Household Agency, but the large majority of the public loved this act. From then until his abdication, whenever a natural disaster strikes Japan, the imperial couple took all the time necessary to comfort the victims.
They were at the scene of the disaster after an earthquake struck Kobe in 1995. When the earthquake and tsunami hit northeastern Japan in 2011, they traveled to the devastated region often over the next few weeks. Emperor Emeritus also showed concern for socially vulnerable people. On many occasions, he has visited the elderly and people with disabilities.
Emperor Emeritus thought many times about the effects of WW2 inside and outside of Japan and the importance of keeping peace in Japan and in the world. The couple visited Okinawa 11 times, where one of the fiercest and final battles was fought, during which more than 200,000 people died. Emperor Emeritus has also mourned people who died on battlefields in the Pacific islands, paying tribute to both sides.
Emperor Emeritus reflected on the Heisei era (1989-2019) at a press conference in December 2018, just before his 85th birthday. He expressed: “I believed that it is important not to forget that countless lives were lost in World War II and that the peace and prosperity of post-war Japan was based on the many sacrifices and tireless efforts made by the Japanese people, and this must be transmitted history with precision to those born after the war, it gives me great consolation that the Heisei Era is coming to an end, free from the war in Japan.”

His Majesty the Emperor (Naruhito) agreed to the Chrysanthemum Throne after the abdication of his father, the now Emperor Emeritus (Akihito) on May 1, 2019, at 00:00 local time and became the 126th emperor of Japan. The Emperor obtained a degree in history from the prestigious Gakushuin University of Japan and studied economic history at the University of Oxford in Great Britain.
His Majesty is an honorary member of the World Water Commission for the 21st century and a sponsor of the Global Water Partnership, established by the World Bank, the United Nations, and the Swedish Development Agency.
The Emperor is expected to continue in the style of his father, who personified the emperor’s constitutional role as the ‘symbol of national unity’ of Japan. “The emperor follows a principle: to share joy and pain with people, from heart to heart,” His Majesty the Emperor said in February on his birthday.
The era of the current Emperor’s (Naruhito) reign is ‘Reiwa’, and according to custom, he will be renamed Emperor Reiwa (Reiwa Tennō) by order of the Cabinet after his death. The name of the next era under his successor will be established after his death or before his abdication.

The Yasukuni shrine is considered one of the most important sanctuaries in all of Japan fo...
">

The Emperor’s Birthday is a public holiday in Japan. Known as 'Tennou Tanjyobi', this holi...