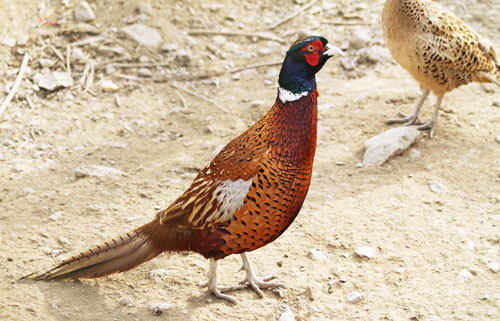 The national bird of Japan is the green pheasant, named ‘Kiji’ in Japanese. It was declared the National Bird in 1947. The Kiji has been featured in many legends, mythology, poetry, and paintings, and it is very famous throughout the world. As a native bird, the Kiji appears in many literary works, for example, it is one of Momotarō’s companions in one of Japan’s most famous stories, it features in pictorial works and even on the back of the old 10,000 yen bills. since it is a protagonist.

Kiji in the Wild

The national bird of Japan, if male, has a green crown, a blue throat, a purple violet collar, its mantle is green with small stripes at the bottom, a green back, dyed in olive or light gray and dark olive colors with a black and pink trim on the edges.

If it is female, it does not have a color as bright as the male, so she can hide easily while caring for her chicks. The dark part of the mantle feathers is black and extends to the narrow and pale brown border, and has a green glow near the tip. The Kiji is endemic to Japan, except for the island of Hokkaido. Pheasants in a natural state are restless and cautious and tend to remain rather wild in captivity. They startle easily and often hide or seek refuge in the thick vegetation or in the bushes where they also usually sleep.

It has been observed that these pheasants are particularly sensitive to earthquakes that go unnoticed by humans who can’t feel the smaller ones, and this way they alert people to impending tremors.

Chrysanthemums first came to Japan from China in the fifth century. Chrysanthemum cultivat...
">

The Shiga Kogen Highlands area is in the northeastern part of Nagano. Formed by volcanic a...