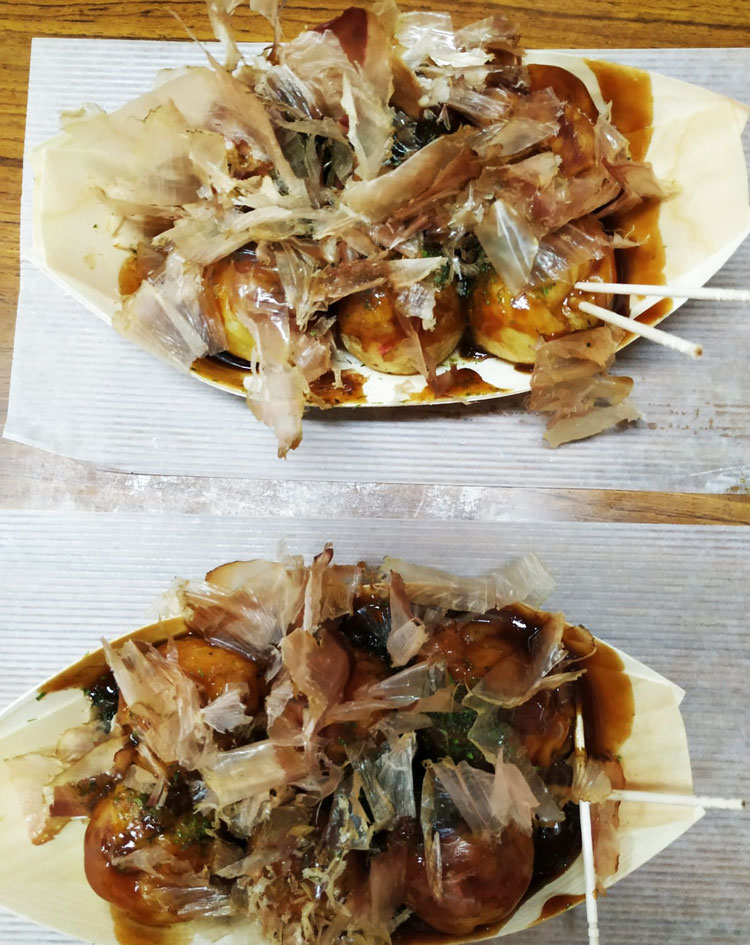 To Japanese people, Osaka is known as the capital of gastronomy. There are some dishes that were born and bred in Osaka and spread out into the rest of the country from here, and there are also some dishes that are also known in Tokyo, but the Osakans have made their very own version of it. Examples of this regional variety are different ramen noodle soup bases and a different shape for sushi which tends to come in a cubic form in Osaka.

Two of the foods of Osaka have truly iconic status and are a symbol of the prolific street food scene of the Kansai city; takoyaki and kushiage.

Takoyaki is a ball-shaped snack made from wheat flour and cooked in a special pan. Its name literally means ‘fried octopus’. It is usually filled with chopped or diced octopus, pieces of tempura, pickled ginger, and green onion. Takoyaki sauce (similar to Worcestershire sauce) and mayonnaise are tossed on top. Then the takoyaki is sprinkled with dried bonito shavings to add some extra smokey flavor.

Takoyaki was first popularized in Osaka, its invention is attributed, in 1935, to a street vendor named Tomekichi Endo. This dish was inspired by akashiyaki, a small round dough ball from the city of Akashi in Hyogo Prefecture, made with egg and octopus. Takoyaki was initially popular in the Kansai region and then spread to Kanto and other places in Japan. Takoyaki is associated with street food stalls, but today there are also many well-established restaurants specializing in takoyaki, particularly in the Kansai region. Takoyaki is also sold in supermarkets and convenience stores to make at home.

The usual way to eat takoyaki is to place 6 to 8 balls of takoyaki in a box, covering them with abundant sauce and sprinkling on dried beans and green algae. However, in Osaka, the dough is also key to the taste. The takoyaki in Osaka is served simple, salty or with a simple soy sauce so you can enjoy the taste of the dough. The inhabitants of Osaka love takoyaki and prefer it to be salty, which helps highlight the flavor of the ingredients. Osaka is said to house more than 650 takoyaki stores. There are subtle differences in taste between each store, so it is recommended to try the takoyaki from as many different stores as possible during your stay in Osaka.

Osaka is the place of origin of kushiage, a fried crispy meal that can be found everywhere in Dotonbori, one of Osaka’s main food streets. The word ‘kushi’ means stick, while ‘age’ means fried in Japanese, so the word basically means fried things on a stick. It is also known as kushikatsu, which means ‘meat chop on a stick’, this does, however, exclude the vegetable-based kushiage, so if we are talking about ‘fried things on a stick’ in general we use the word kushiage.

Vegetables, different types of meat, cheese, and even cookies, fruits, and mochi (glutinous rice cakes) can be enjoyed battered and fried in a kushiage style. Each kushiage stand or restaurant offers different variations of this popular dish, so it is recommended to try kushiage in different places. You just have to remember the golden rule: you shouldn’t double-dip.

These two delicious dishes are the business card of Osaka cuisine, so if you have the chance to go to Osaka it is recommended to try them both, preferably in different variations!

As seasoned Japan experts, we can help you create your perfect Japan tour including experiences like food tours and local dinners in Osaka. Contact us to start planning your unforgettable holiday to this fascinating country full of once-in-a-lifetime experiences, culture, history, nature, and delicious food!

Japan is a country with one of the richest cuisines in the world, with endless dishes to c...
">

To help you decide where to go in Osaka if you are short on time, we compiled a list of th...