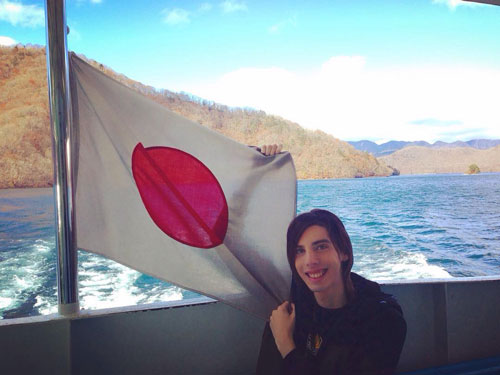 The national flag of Japan is officially called ‘Nisshoki’, which means ‘Flag of the Sun symbol’, although colloquially it is known as ‘Hinomaru’ which means ‘Circle of the Sun’, and it is the most important symbol of Japan. The exact origins of the Nisshoki are unknown, but there are historical data from the year 607 where the Emperor of China communicated with Japan calling it ‘The country of the Rising Sun’. Later, during the attempted invasion of Mongolia in Japan in the 13th century, a Buddhist monk named Nichiren gave the shogun a flag to carry in battle and it was very similar to the Nisshoki. Subsequently, at the beginning of the Edo period, the red circle representative of the current flag was used in fan designs and different paintings. In 1854 the shogun ordered all merchant ships in Japan to use the Nisshoki flag to differentiate Japanese ships from foreigners.

At the beginning of the Meiji period, the country was forced to design state symbols for the first time, such as the national flag, the national anthem, and the imperial emblem. Therefore, after going through an extensive review, the Nisshoki became the de facto national flag in Japan. During the Meiji period until the end of the Showa era (1864-1945), the Nisshoki was widely used for multiple purposes, but mainly to unify Japan and represent the honor and joy of being Japanese. In those days it was very common that families raised the flag during the festivities or important events. The Nisshoki is used as moral support in the ‘Hachimaki’, a bandana that is tied on the forehead, and that generally contains written messages such as ‘Safe Victory’, ‘Japan’, ‘Number 1’ and other motivational phrases.

In 1945, after the surrender of Japan, the Allied forces occupied the country until 1952. During this period the use of the flag of Japan in any of its forms was highly restricted. It was subsequently allowed to be used in buildings related to the national government. During the period of occupation, US forces began a campaign to change the image of the Japanese on their flag towards a negative image. Finally, in 1949, all restrictions were removed and anyone anywhere can raise the flag of Japan. After the war in Japan, the use of the flag was considerably reduced, but most schools raise the Nisshoki every morning. Also, the flag was the symbol of the Olympics held in Japan in 1964. After many years, since its de facto adoption, in 1999 the first official law was passed that states that the flag of Japan is the Nisshoki, and that the national anthem is ‘Kimi ga yo’.

The white background color symbolizes the purity, honesty, and integrity of the people of Japan. The red color is said to represent the main goddess of Japanese mythology, the sun goddess Amaterasu. It is said that His Majesty the Emperor of Japan is a direct descendant of the sun goddess. Today the Nisshoki is recognized worldwide as the official flag of Japan.

The national bird of Japan is the green pheasant, named 'Kiji' in Japanese. It was declare...