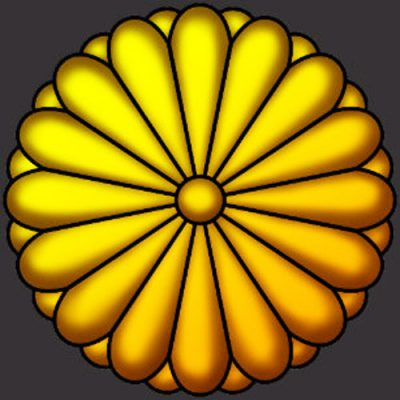 In Japan, the chrysanthemum is recognized as the national flower because it is the Imperial Emblem of Japan. It is printed on the cover of a Japanese passport, you can see it in Japanese embassies abroad, Shinto shrines, diplomatic buildings, and any other place where the symbolic state authority of His Majesty the Emperor should be demonstrated. The origin of this symbol dates back to the time of Emperor Go-Toba (1180 – 1239), with His Majesty choosing the flower as his personal emblem.

Chrysanthemums first came to Japan from China in the fifth century. Chrysanthemum cultivation began in Japan during the Nara and Heian periods (710-1185) when the flower was planted throughout Japan. It steadily gained popularity in the Edo period (1603-1868). In Japan, more than 350 types of 200,000 varieties that are known in the world can be found. When the flower was adopted for the Imperial Seal of Japan, some clans also started cultivating the flowers to indicate their support and good relationship with the Imperial Family. As the chrysanthemum represented the noble class and the fall season, Japan hosts a festival in honor of the chrysanthemum in October/November on the grounds of the Yasukuni Shrine and the Meiji Shrine.

You can find Japanese restaurants that use culinary quality chrysanthemums to decorate food, and the flower remains a common motif in traditional Japanese arts such as porcelain decoration and kimono design.

The official day of the chrysanthemum is known as Chōyō, which literally means ‘Chrysanthemum Festival’ (Kiku no Sekku), and it is one of the five sacred events in Japan. It is usually celebrated on the 9th of the 9th, September 9th. A ritual is performed both in Shinto shrines and in Buddhist temples, and the festival focuses on the desire for longevity and is often enjoyed by drinking chrysanthemum’s sake.

The chrysanthemum is an ornamental flower full of symbolism in many countries. In Asia it represents longevity, so it is also a flower that is widely used in rituals. When the flower is yellow, it symbolizes sunlight, heat, and, moreover, represents joy, happiness, intelligence, and energy.

The Emperor’s Birthday is a public holiday in Japan. Known as 'Tennou Tanjyobi', this holi...
">

The national bird of Japan is the green pheasant, named 'Kiji' in Japanese. It was declare...
">

Near the areas of ​​Shibuya and Harajuku is the famous Meiji Jingu, where the souls of Emp...