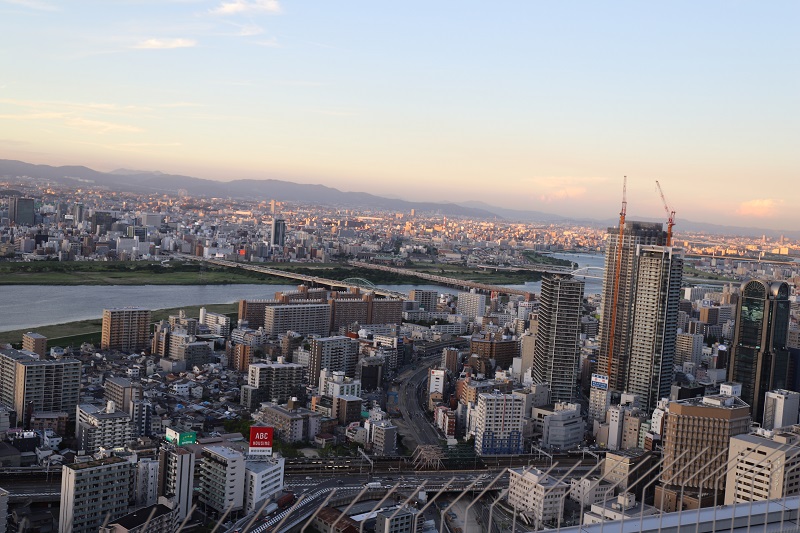 Osaka has a long history, during which the area has always served as a place where traders from all over Asia and later the world are intermingling with Japanese people. The city is a gateway through which new techniques and ideas entered Japan and has thus always been more diverse than the average Japanese city. If we go back all the way in the city’s history we have to go to the 5th century when the city was named Naniwa-zu. It was located around the area that is now called Chuo-ku in Osaka, one of the most central locations in the city.

Naniwa-zu was the place from which not only new crafts and technology were introduced, but also Buddhism made its first mark here in the 6th century. One of the imperial princes had the Shitenno-Ji temple built in honor of Buddhism, which is still there today. The capital city of Japan was originally in Nara and didn’t move to Kyoto until after Osaka has had a brief stint as the capital city as well. In the Naniwa no Miya park you can still see some of the remains of the imperial palace that has once been there. Even though it didn’t become the capital city again, Osaka has always done well as the second city of Japan and forming the face that the country has shown to the rest of Asia for a long time.

During the Heian Era Kyoto was the capital city. This was the time during which many Buddhist temples have been built in Kyoto and Osaka. During this time women’s culture has also bloomed, one of its pinnacles being the very famous history work ‘The Tale of Genji’ by Murasaki Shikibu which every junior high school student still has to read by today.

Once the 12th century rolled around the political balance shifted from one clan to another, and the first shogunate was established during which not the emperor and the people around him were in power, but the shogun who was like a military ruler took over. The shogunal capital was moved to Kamakura (near Tokyo) and the country’s peace became less stable. This eventually ended up in the Sengoku period, literally meaning ‘period of the Warring Clans’ which lasted from the 15th to the early 17th century.

Osaka was already ruined by war by the 14th century and in 1496 a small temple and monastery were built by a monk. Because of the constant state of war, it had to be built as a fortress if it wanted to survive, and that would become the Osaka Castle eventually. The temple kept growing in power, not only spiritual but also militaristic and political, and the castle in the form we know it today was built in the late 16th century.

The place where the castle is built is slightly raised from the area around it, which made it a perfect location for a fortress. It was easy to see the enemy approach, and the enemy also had to struggle uphill first before they could even start the battle. It was also strategically located between 2 rivers, which was very important at that time as most trade needed waterways for transportation. This means the castle also became an economical center beside a fortress for the temple.

It was only after more than 10 years when Nobunaga, who had been wanting to submit the temple to grab the power in the region for a long time, managed to win the battle. The fortress was nearly in ruins by that time. Nobunaga’s successor had big plans for the castle and enlarged the waterways and connected them to the sea. It was, however, not for a very long time as the castle was again destroyed in 1615, and the clan that had the rule fell.

The Tokugawa period is also known as the Edo period, as this is the time when the power was transferred from Kyoto to Edo, which is now Tokyo. This was the time when the shogunate closed off Japan from the rest of the world and banished nearly all foreign influence. Osaka was in ruins, but because of the strong mentality of the people, it was quickly rebuilt and became an economic center once more. The city gained the nickname of ‘kitchen of the nation’ because most imported foods came from Osaka. Later it also became the area from which Japanese goods were exported all over the world.

This is the time during which Osaka developed its unique local culture. Not only in the traditional Japanese arts, but also in popular culture for the masses Osaka flourished. Puppet theater, Noh theater, and an Osaka version of kabuki theater were all blooming here. Also in academics, the city would become important from the mid 19th century on, many prominent academics who would contribute greatly to modern Western medicine and science in Japan, and they helped open up Japan to the world after centuries of isolation and bring in modernity.

The Meiji period began in 1868, and it became a very quick rise to modernity as Japan had centuries of technological advances to catch up on. Tokyo became the new economic center while Osaka began to sink into the background. This is the time that Osaka tried out to become the center of industry. Factories sprung up everywhere and this gained them the nickname ‘Manchester of the East’.

In the late 19th century Osaka formally became a municipality, and they soon were host to the Domestic Industrial Exhibition in 1903 which brought many prominent companies to the city who wanted to buy the newest technology available at that time. The first city tram system in the world was also in Osaka, and it was for a while the 6ht largest city in the world.

Osaka was hit hard by Allied bombs in WWs as they mainly hit industrial and commercial areas. But as they have done countless times before, they rose again from the ashes even better than before. The city has hosted countless events including the first World Exhibition in Asia. Currently, Osaka is home to many companies’ headquarters and all kinds of entrepreneurs. The city is going strong economically and is seen as the central city of Western Honshu. Everything a modern metropolis needs can be found in Osaka: convention centers, a sublime choice of hotels, some of the best food and drinks in the country, plenty of entertainment, and rich history.

Namba is located in a district called 'Minami', which means 'south' in Japanese as this ar...