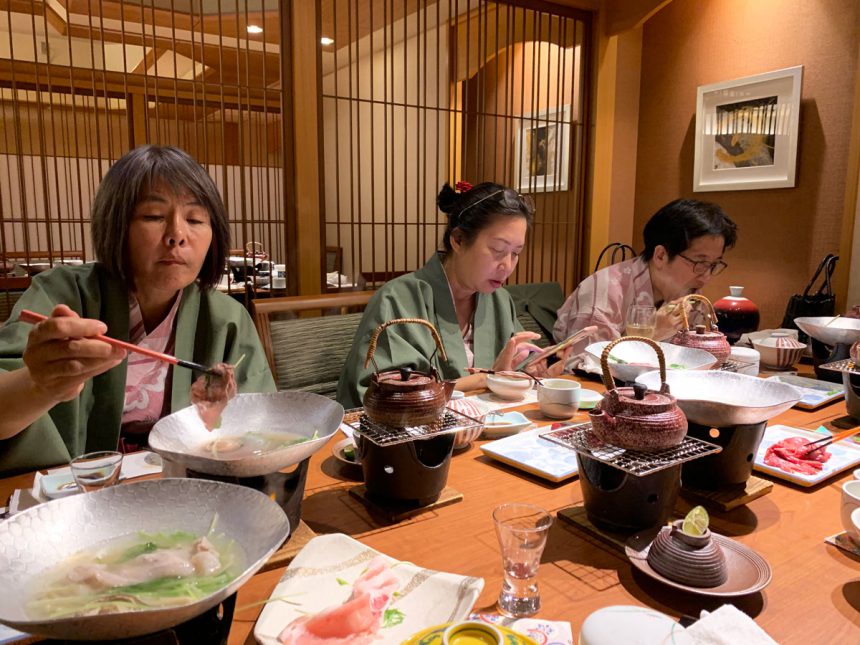 Shabu shabu is still a relatively new dish, being a dish inspired by the Chinese style hot pot that was brought to Japan by a restaurant named Suehiro from Osaka. The owner invented the name which derives from the sound the food makes when being swished around in the boiling water, and officially registered it as a trademark in 1955.

Very high-grade beef, pork, or another meat or fish, is sliced no thicker than one to two millimeters and laid out on a plate. With shabu shabu you prepare your own food; one slice is swished around in the boiling water using your chopsticks for three or four seconds until the color of the meat changes.  This is then dipped into a sauce based on soy sauce or ground sesame and eaten. The boiling water contains dashi stock and kelp for flavor. Tofu and vegetables are eaten as side dishes. You will have a bowl of rice as well, and once the meat and vegetables are finished you will put the left-over rice in the pot and eat it as a soup.

As seasoned Japan experts, we can help you create your perfect Japan tour including experiences like food tours and local dinners possibly including shabu shabu. Contact us to start planning your unforgettable holiday to this fascinating country full of once-in-a-lifetime experiences, culture, history, nature, and delicious food!

Ramen became one of the iconic foods from Japan, having gained a lot of popularity outside...
">

To Japanese people, Osaka is known as the capital of gastronomy. There are some dishes tha...