Whether you are in a large city like Tokyo or in a small village in the countryside, a Shinto shrine is never far away in Japan. Most Japanese people are not particularly religious or pious, but many people still feel a connection with shrines and what they represent.

Many people like going to their nearest sanctuary every now and then to spend a few minutes praying for health, family, and love or just for giving thanks. Another example of how Japanese people give expression to their spirituality is how there are a few phrases in the Japanese language that are directly derived from Zen Buddhism, a good example of this is ‘shoganai’ which means it is no use getting angry about something that cannot be helped anyway.

The meaning of each reverence, each smile, each service that people do here for others has a spiritual meaning, conscious or not. Shintoists believe that every living being is sacred, has an energy, and that it deserves respect. Sometimes it even goes as far as feeling that there is a spirit in an object, which partly explains why things are often treated with a lot of respect. 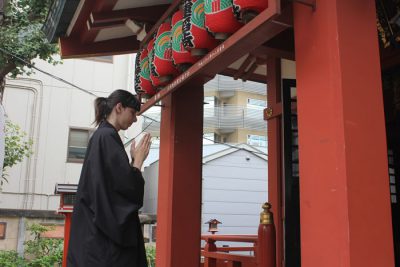 If you want to visit a Shinto shrine, you should consider the following:

2- Wash your hands with the sacred water that is often found on one side of the sanctuary.

3- Go to the front of the sanctuary’s main hall and throw in the donation box some coins for good luck.

4- Two consecutive bows must be made. Clap twice and pray silently. You can pray for everything you need. Finally, a final bow must be made to thank the Kami who heard the request. Then you must retire.

5- It is optional to check your fortune with the sacred omikuji (prediction of the future on paper). In most shrines, omikuji is also available in English. It is a summary of what the near future will have in store. After reading it can be placed in a special place together with the other omikuji since if it was good fortune, it will be fulfilled faster and if it was a bad fortune, the Kami can help change your destiny.

6- You can remain in the sanctuary for as long as you require, but when you leave, you shouldn’t forget to make the final bow after you exit from the main torii in the direction of the sanctuary.

It is impressive that even in one of the largest and busiest cities in the world, such as Tokyo, we find this important tradition in the hearts of its citizens.

Shinto has been the main religion in Japan since ancient times, centering on the ideas of ...
">

Near the areas of ​​Shibuya and Harajuku is the famous Meiji Jingu, where the souls of Emp...