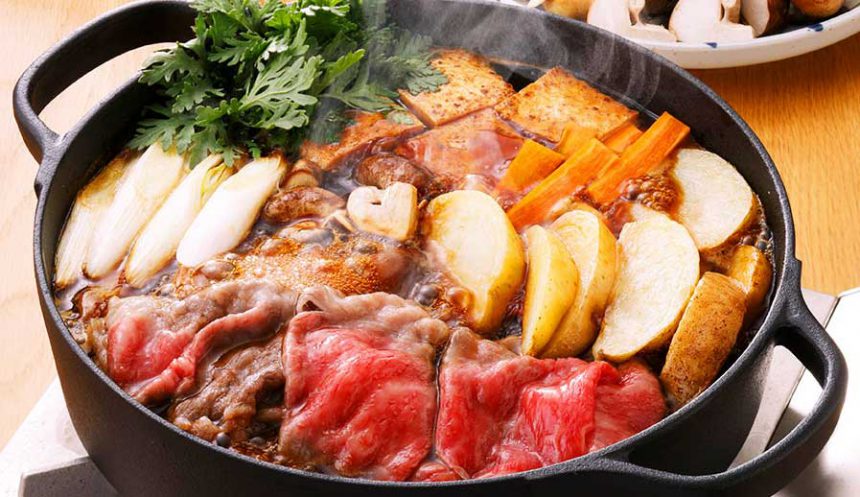 Sukiyaki is a typical Japanese wintertime dish featuring beef, tofu, scallions, cabbage, and mushrooms. They are all put together in a pot, seasoned with soy sauce and sugar, heated and then dipped in raw egg and eaten. It is cooked using a ‘nabe‘, which is a Japanese hot pot usually made of clay or iron. It is one of the home-cooks’ favorite dishes to make because it doesn’t require too much preparation and you can easily feed 4 or more people. The traditional year-end parties at work are also often celebrated with sukiyaki.

From Vegetarian to Carnivore

Sukiyaki’s history is not as long as some other Japanese foods, as eating meat has long been forbidden in Japan because of Buddhist traditions. But when Japan opened up to Western influences in the late 19th century, eating meat was no longer a taboo and sukiyaki became popular.

As with many dishes, sukiyaki also has varieties when it comes to ingredients depending on the region where you eat it, but since the Kanto earthquake in 1923, the Kansai style became standard, as many people from Kanto moved to Kansai temporarily after the earthquake and became used to eating sukiyaki in the Kansai style. Sukiyaki Kansai-style means that the meat is heated up first, then the condiments are added, and lastly, the vegetables are added.

As seasoned Japan experts, we can help you create your perfect Japan tour including experiences like food tours and local dinners possibly including sukiyaki. Contact us to start planning your unforgettable holiday to this fascinating country full of once-in-a-lifetime experiences, culture, history, nature, and delicious food!

Shabu shabu is still a relatively new dish, being a dish inspired by the Chinese style hot...
">

Two lesser-known types of noodles from Japan have deeper Japanese roots, and these are udo...
">

Japan is a country with one of the richest cuisines in the world, with endless dishes to c...