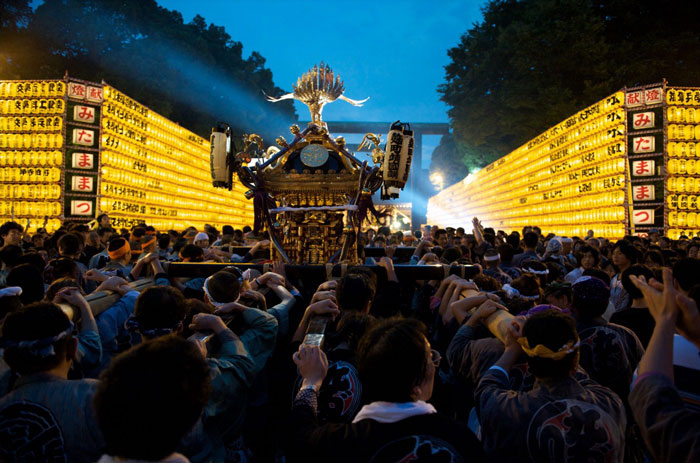 While during wintertime people in Japan tend to stay indoors where it is cozy and warm and many of the streets are deserted or much more quiet than usual, summer is the liveliest season in the country of the rising sun. The streets are full of colors due to the countless festivals held in different parts of the country. In summer it is also customary to wear colorful yukata, a casual summer kimono that is usually worn when people go to festivals or go to watch fireworks.

Summer is the best time to go to the beach in Japan, as popular beaches will have lifeguards on duty and pop-up cafes and shops will appear on the beaches. Numerous water playgrounds for kids and adults to play in and cool down in will be in use, and Japan’s nature looks lush and green. If you try to avoid being outside during the hottest time of the day when you are in one of the cities and go outside of the city to the cooler mountain areas or northern areas, traveling Japan during summertime is definitely fun!

During the day, the average high temperature in the summer is around 30°C/86°F, while the average night temperature in July and August is around 20°C/68°F, reaching about 24 to 26°C/72 to 79°F at max. It tends to be humid, and while it usually doesn’t rain for days on end, if it does rain it is often a real downpour.

Tanabata, or the Star Festival, involves a Japanese tradition during which people write their wishes on small, colorful strips of paper (tanzaku) and hang them on the branches of a small decorative bamboo tree. It’s widely celebrated all over Japan, typically on the seventh day of the seventh month (July 7) – although some regions observe Tanabata on August 7, depending on how they decided to interpret the old lunar calendar. Based on a story of star-crossed lovers, Tanabata is among Japan’s most vibrant traditional festivals.

The Sumidagawa Fireworks Festival (隅田川花火大会, Sumidagawa Hanabi Taikai) has been held every year since 1978 and is one of the most famous and largest firework events in the capital, attracting about one million spectators each year.

During some of the hottest summer days, the most spectacular Obon festival in Japan, the Mitama matsuri, is celebrated in central Tokyo. The Yasukuni Shrine is decorated with more than 30,000 traditional Japanese lanterns, from the great torii gate to the main gate to the shrine. Obon is the holiday during which for three days the spirits of passed family, friends, and ancestors return to the earth to visit their loved ones and celebrate with them.

The Gion matsuri is not just Kyoto’s biggest festival, it’s one of Japan’s biggest annual events. Originally held to pray for deliverance from the plague, the festival has evolved into a huge celebration of Kyoto culture. It’s also a huge summer block party in which locals and visitors gather to walk around in colorful yukata robes and gorge themselves on street food and beer. The main events are two processions of traditional parade floats, held on 17 July and 24 July.

Mt. Fuji is the most iconic symbol of Japan and it is a goal for many locals, Japanese visitors, and foreign residents and tourists, to climb the mountain. The climb itself is not too difficult and even beginners are able to climb the mountain as long as you are in good health. There are crowds, but everyone is there for the same reason, and that is to experience this once in a lifetime climb, and for many also one of the most beautiful sunrises in the world. Mt. Fuji is only open to climbers in July, August, and early September, which makes this a quintessential summer activity.

Shaved ice, known in Japan as kakigori, is a soft and fluffy ice dessert sometimes topped with condensed milk or ice-cream, but most often with flavored and colored syrup. Flags displaying the kanji 氷 (kōri), meaning “ice,” in red against a white background are a traditional way to indicate that the dessert is available. Stalls are a common sight at summer festivals and during the Obon period.

The way unagi is prepared in Japan is not seen anywhere else, and it is considered a high-end food so expect to pay a bit more than you would for an average meal. Japanese eel is a food that is supposed to give you stamina and energy during the hot summer months, so it is highly recommended to try this delicious fish.

You have probably already heard of ramen, udon, and soba noodles, but somen noodles are not as well-known abroad. The reason might be that this dish is only eaten for a few months during summertime in Japan. Somen noodles are usually eaten cold and dipped in a savory sauce to flavor them. If you are lucky enough to run into a place where they serve nagashi somen, you can catch your noodles while they float in a ‘bamboo river’, fun for the whole family for sure!

If you are thinking about making a trip to Japan, as seasoned Japan experts we can help you create your perfect Japan tour during summer. Contact us to start planning your unforgettable holiday to this fascinating country full of once-in-a-lifetime experiences, culture, history, nature, and delicious food!

What can you do on the Izu Seven Islands in Japan? A lot quieter than the usual beach reso...