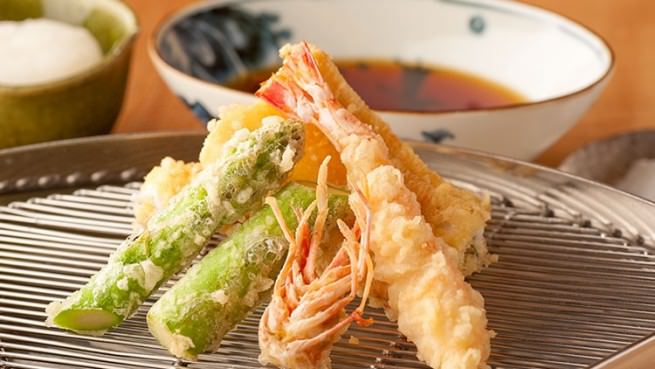 Many people don’t know that tempura is actually not an original Japanese food and that it has a long history. Tempura was first made in Japan in the early Edo era when foreigners could barely enter Japan. The Portuguese, however, were one of the exceptions for a while. They didn’t just bring Japan the Catholic faith, but they also taught them about batter frying. Japanese people soon got a taste for this delectable food, and it is said that even the first Tokugawa shogun of Japan loved himself a bit of tempura.

There are many base ingredients that you can make tempura of, a few examples are white fish, shellfish, and many kind of vegetables like broccoli, eggplant, mushroom, and even bitter gourd are often used ingredients. In order to make tempura, the base ingredient is dipped into a batter of wheat flour dissolved in water, then fried in hot cooking oil, dipped in a special broth, and eaten. What’s characteristic about tempura is its light taste, distinct from food that is directly coated in wheat flour and then fried. The best time to eat them is right on the spot after preparation, whether at a restaurant or at home.

It takes skills to learn how to make truly good tempura, and a lot also depends on the ingredients that are used. As many restaurants in Japan are specialized in one type of food, there are many tempura specialists, of which some are better than others. Popular tempura restaurants where you can eat excellent tempura for a decent price tend to get very crowded, and usually there is a line if you want to have a seat.

Tonkatsu was invented in the late 19th century and it became a very popular dish in Japan....
">

In 2018, the fish market (including the famous tuna auction) and the wholesale markets mov...
">