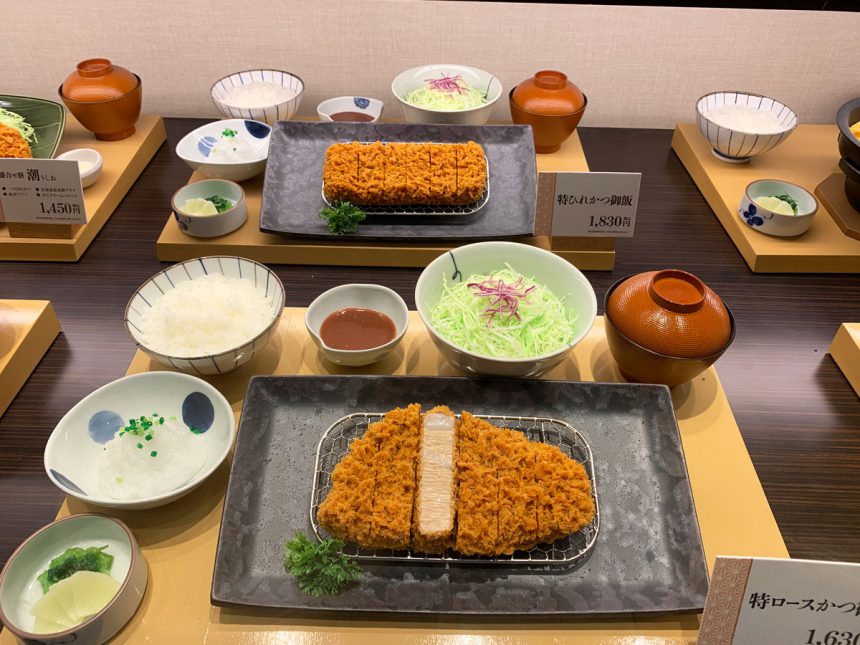 Tonkatsu is a one or two-centimeter-wide pork cutlet that is breaded and fried, cut into bite-sized pieces, and usually served with julienned cabbage. It can be made with both lean pork fillet and pork loin, usually adding salt and pepper to the meat and dipping it in a mixture of flour, beaten eggs, and panko (Japanese bread flakes) before frying.

This pork dish has been adapted to fit Japanese palates more than other European foods, and today it is served with rice, miso soup, and tsukemono (pickles) in the purest washoku (traditional Japanese food) style. In restaurants, a tonkatsu set is served with chopsticks. Some establishments even serve the dish with the more traditionally Japanese grated daikon and ponzu instead of with regular tonkatsu sauce.

Some restaurants serve tonkatsu dishes with spicy yellow karashi (Japanese mustard) or a slice of lemon. Some people prefer it with soy sauce. In and around Nagoya, the specialty is miso katsu, tonkatsu served with a strong-flavored miso-based sauce.

Tonkatsu can be eaten in various ways, the set menu style is only one of those variations. Another interesting variation is one of the best examples of Western-style food with a very strong Japanese influence, ‘katsu sando’, a sandwich with tonkatsu in between. If you want to eat a hearty lunch or dinner that will keep you going for a long time, tonkatsu over Japanese curry (katsukarē) is a good choice. One more popular way to eat tonkatsu is katsudon, tonkatsu served with egg and onion over rice.

The quality of tonkatsu can vary greatly between shops. If you get a tonkatsu dish from a convenience store or a cheap chain restaurant your experience might be a bit underwhelming. The very best tonkatsu is usually to be had in small, local restaurants that have perfected their food for decades or even longer. One of the best tonkatsu restaurants can be found in Kagurazaka. It is called Agezuki and there is usually a line, but trust us when we say it is worth the wait.

Kushikatsu – Pork and vegetables fried in abundant oil and served on a skewer.

As seasoned Japan experts, we can help you create your perfect Japan tour including experiences like food tours and local dinners possibly including tonkatsu. Our private guides know just where to get that local secret place with the juiciest tonkatsu. Contact us to start planning your unforgettable holiday to this fascinating country full of once-in-a-lifetime experiences, culture, history, nature, and delicious food!

To Japanese people, Osaka is known as the capital of gastronomy. There are some dishes tha...
">

Many people don't know that tempura is actually not an original Japanese food and that it ...
">

Japan is a country with one of the richest cuisines in the world, with endless dishes to c...