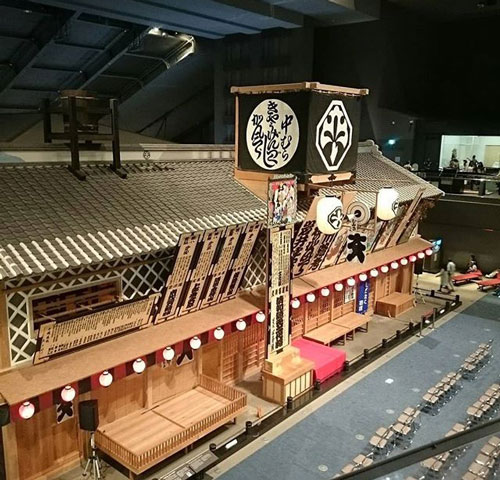 In the heart of the Japanese sumo wrestling city of Ryogoku is the acclaimed Edo-Tokyo Museum. An enormous structure of 62 meters high, boasting an infrastructure that is based on a warehouse of the Edo period it is a museum that offers its visitors the opportunity to learn more about Japan during the peaceful Edo period.

When you arrive at the museum and then buy the tickets, you go up to the first room on an escalator while seeing paintings or representations of the Edo period. Upon reaching the first room you can see a replica of the Nihonbashi Bridge. At that time, this bridge connected the rest of the cities of Japan with the city of Edo. Further on there is detailed information on each of the Tokugawa shogun that ruled in this period of history, starting with its founder, the honorable Tokugawa Ieyasu.

The Edo period is the longest era in Japanese history, beginning in 1603 and lasting until 1868. Its founder was Tokugawa Ieyasu, a pacifist samurai that ended the stormy war that took place in Japan for several centuries. Subsequently, his son, in an extraordinary way to separate Japan from foreign influence, closed the entrance to the country to the rest of the world. No one could enter or leave Japan without authorization from the shogun himself.

This is how during the Edo period Japanese culture began to flourish, and the great city of Edo (nowadays Tokyo) began to develop, the most populous city in the world even at that time. In the Edo-Tokyo museum, the visitor can gradually observe how the revolutionary city was gradually built at a rapid pace. The visitor is invited to try the old means of transport and even see how the rooms of the common families were. There are replicas of the main characters of this era, such as the elegant oiran, the Kabuki actor, and the famous samurai.

This museum doesn’t just show what life was like in the Edo period but also shows the Tokyo of today. Going through the Meiji restoration, all the changes of European-style homes and clothing flooded Japan. There is a section dedicated to the American bombings that destroyed almost the entire city of Tokyo, losing in the flames many historical buildings of the Edo and the Meiji period.

Finally, the museum shows how Tokyo was evolving again into an industrial city and all the challenges that it went through until what today became the modern and ecological metropolis of Tokyo. The museum is a highly recommended visit for those who want to know in-depth how the great capital of Japan was created. The exhibits are suitable for all audiences and it is a fantastic way to see the history first hand.

If you are thinking about making a trip to Japan, as seasoned Japan experts we can help you create your perfect Japan tour, including destinations like the Edo-Tokyo Museum. Experienced guides can help you make the most of your limited time in Tokyo and show you all the best this city has to offer, famous highlights as well as lesser-known, more local places. Contact us to start planning your unforgettable holiday to this fascinating country full of once-in-a-lifetime experiences, culture, history, nature, and delicious food!