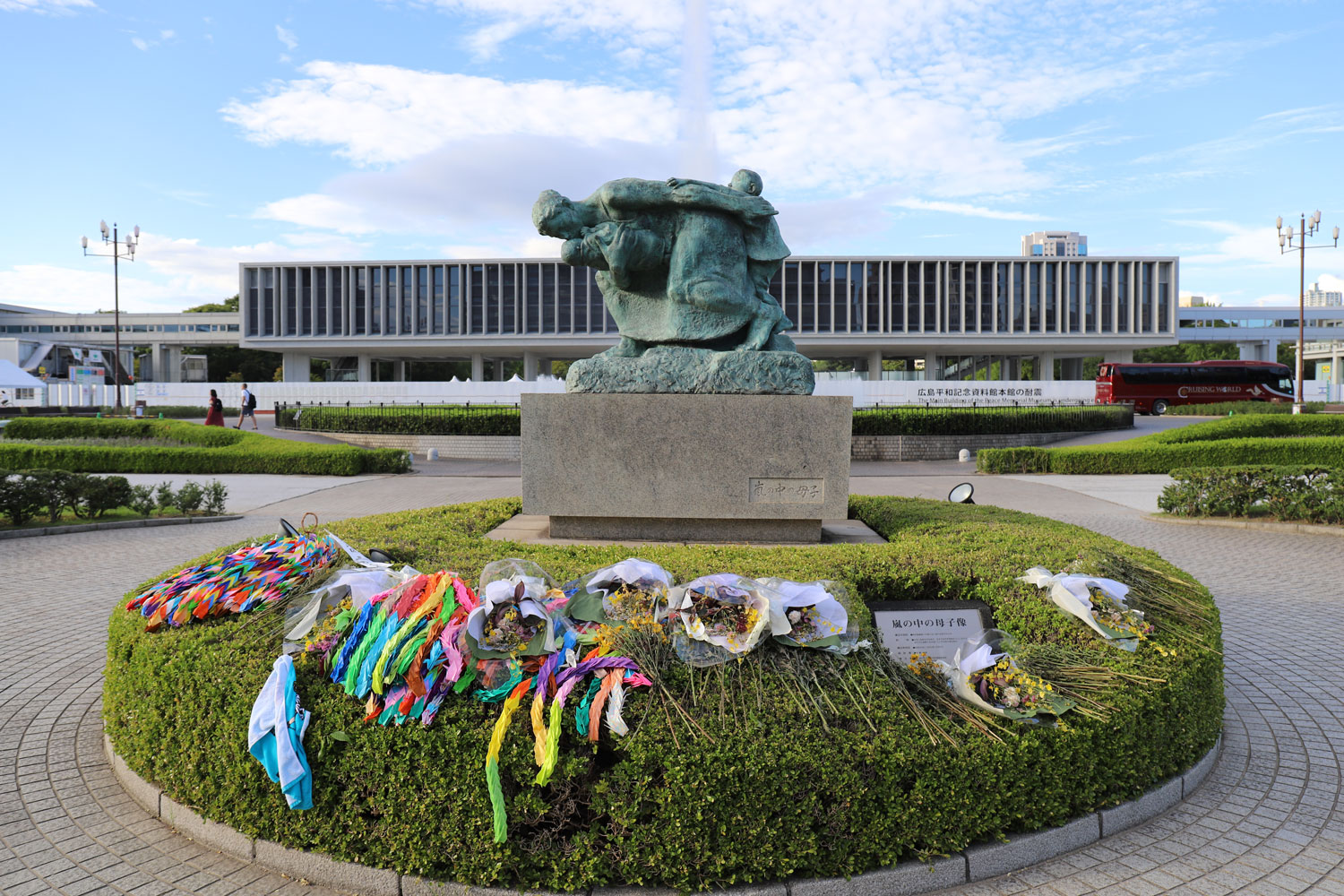 Hiroshima is known all over the world as the first city in history subjected to nuclear warfare when it was bombed during WW2. Hiroshima had large depots of military supplies and it was a key center for shipping. The eventual loss of over 200,000 lives has forever linked the city’s name with nuclear holocaust and mass killings.

After the war, Hiroshima was rebuilt. The city is the capital of Hiroshima Prefecture and the largest one in the Chugoku region of western Honshu, and once again a flourishing provincial city. UNESCO listed the Hiroshima Peace Memorial (Genpaku Dome) as a World Heritage Site in 1996. The city is now a symbol of peace.

The history of Hiroshima begins in 1589 when Terumoto Mori began the construction of a castle in a delta in what was then called Goka, and the area was named Hiroshima (Wide Island). At the same time, vassals from all regions of the territories migrated to the new Hiroshima, and workers and merchants were invited to build a castle city, mimicking that of Kyoto and Osaka. In 1591, the enclosure was provisionally completed, Terumoto was installed and the surrounding countryside, once full of reeds, was transformed into a castle town almost instantly.
Land reclamation works on tidal grounds south of Hiroshima Castle during the Edo period allowed for rapid construction in that area with more than 35 new cities and towns established during the Bunsei period (around 1820). The population of these newly established settlements exceeded 48,000. Together with the original inhabitants of the city of approximately 20,000 samurai and people residing in temples and shrines, the total population of the city of Hiroshima Castle was approximately 70,0oo.
Since Hiroshima was the largest city located on the inland sea route, the Hon and Motoyasu rivers were full of ships from other provinces of Japan, and the city enjoyed a lively trade. Numerous local products from the surrounding areas such as cotton grown in coastal regions; hemp jute, paper, bamboo, and vegetable products from the Ota river basin; and algae, oysters, and other marine products from Hiroshima Bay were brought to the nearby area.
The connection with the naval port of Kure was increased with the opening of the Kure railway line in 1903 and the port became a major military base with the outbreak of the Russo-Japanese war in 1904. From that moment, Hiroshima city assumed more and more the aspect of a military city as numerous military facilities were built while at the same time the city became the political, economic, educational, cultural, and transport center of the entire Chugoku district.
On August 6, 1945, a single atomic bomb was detonated approximately 600 meters above the center of the city of Hiroshima, which resulted in an explosion that instantly reduced a prosperous city, which at one time had a population of about 420,000 people, to ashes. There were reports that Hiroshima would be sterile and uninhabitable for the next 70 or 75 years, but thankfully that turned out not to be the case.
The city of Hiroshima began to resemble a large metropolis due to the opportunities that arose to expand the facilities and services of the city, including the opening of the Hiroshima airport (now Hishi Nima airport) in 1961, the opening of the Sanyo Honsen fully electric railway in 1964, the construction of flood control channels for the Ota River and the completion of the Hiroshima station, built with government and popular support in 1965 and the opening of the Shin-Hiroshima ring road in the National Route 2 of the highway in 1966.
In 1989, the city of Hiroshima celebrated 100 years since it was established as a city and 400 years since Hiroshima Castle was established. In 1990, the city reached a significant 10-year milestone as a city designated by the government. In July 2006, the main building of the Hiroshima Peace Memorial Museum was designated as a National Important Cultural Property and the Peace Memorial Park was selected as a National Scenic Beauty Site in November.

The area currently known as Peace Memorial Park was previously an urban district called Nakajima. It is estimated that at the time of the atomic bombing, some 6,500 people lived in the seven cho (neighborhood units) in the Nakajima district. On August 6, 1945, the first atomic bomb in history exploded directly over this area. In addition to the usual inhabitants, thousands of volunteer members of the army corps and mobilized students were in the area demolishing buildings for a line of fire. Almost all of these lives were extinguished when the entire district disappeared instantly. The bomb devastated Hiroshima within a 5 km radius, resulting in 140,000-150,000 deaths in December of that year.

The Japanese are not the type of people that stop after disasters, but instead prefer to recover immediately, with their heads held high. On August 6, 1945, Hiroshima changed forever. However, instead of an end, the bombing triggered a new era. Suddenly and dramatically presented with destruction, the city adopted a new philosophy of pacifism.

On August 6, 1949, with the promulgation of the Construction Law of the Peace Memorial City of Hiroshima, it was decided that the entire Nakajima district would be dedicated to peace memorial facilities, and that was the beginning of what is now Peace Memorial Park. The park covers approximately 122,100 square meters. It was designed by Kenzo Tange, a professor at the University of Tokyo, and three other people, whose proposal was selected through a design competition that attracted 145 proposals.

At the southern end of the park, there is a line of three buildings: the East Building, the Main Building of the Peace Memorial Museum, and the Hiroshima International Conference Center. Even though this park is the symbol of a human tragedy, the Peace Memorial Park does not invite sadness but instead encourages looking at a brighter future.

On the other side of the dome, there is a cenotaph monument, or empty tomb, with the names of the victims. Protected by an arch that takes the symbolism of Shinto to protect the souls of the dead, it aligns with the flame of peace, burning since 1964, when it was first lit. The inscription ‘May all souls rest here in peace, because we will not repeat evil’ appears on the monument, calling on all mankind to never forget the horrors of Hiroshima so that it is not repeated. The moving perspective of these three strong symbols of the disaster ends with the Peace Memorial Museum, where the alignment of the ark, flame, and dome come together.

In the center of the park, between the Honkawa and Motoyasu river bridges, near the memorial tower of the mobilized students, there is a monument dedicated to children. Probably the most moving place in the park, this monument pays tribute to the hundreds of young people who were taken too soon. The story of Sadako Sasaki (1943-1955), her perseverance and hope, resonate with this monument. This girl, a survivor of the disaster, lived until 1955 when leukemia took her life.

According to Japanese legend, anyone who makes a thousand origami cranes can get their wish; with this hope, Sadako began to tirelessly fold sheets of colored paper. Unfortunately, she died before completing the task, having manufactured six hundred and forty-four cranes. Hundreds of other children were inspired to finish her task, and origami cranes became a symbol of healing.

On July 5, 2006, the Main Building of the Peace Memorial Museum was designated as one of the important cultural assets of Japan. In the East building, Hiroshima before and after the bombing, the background of the bombing of Hiroshima, the actual situation of the nuclear era, and the peace efforts of the city of Hiroshima are introduced through models, images, and photo panels. There is also a video room where documentary films can be seen, and on the basement floors, there are exhibition halls of paintings of surviving citizens; meeting rooms and rooms where students on field trips can listen to testimonies of survivors, and a reference room for information where books about the atomic bombing and peace can be seen.

The main building shows artifacts and materials from the bomb that explain the terrible powers of heat rays, explosion, radiation, and intense heat fires. The facility is also equipped with sections where visitors can see and hear the testimonies of atomic bombing survivors and can write their impressions and messages for peace.

Suggestive exhibits at the museum include a molten tricycle that a 4-year-old boy was riding during the explosion that burned him to death. Similar moments are invoked through artifacts as small as a wristwatch or a lunchbox worn by a student who perished at school. Photos, documentaries, drawings of survivors’ nightmares, scientific explanations of the explosion, and artifacts such as melted glass and charred clothes hint at the unimaginable.

Although the Atomic Bomb Dome was located almost directly below the explosion, somehow that fact let it escape complete destruction.  The residents of Hiroshima decided to keep intact this tragic reminder of the war. The site was declared a World Heritage Site in 1996. By visiting the Dome of the Atomic Bomb, the Cenotaph for Victims of the Atomic Bomb, and the Hiroshima Peace Memorial Museum you get a deeper understanding of the suffering caused by the war and nuclear weapons and the true value of peace.

The bomb exploded at a height of 600 meters, 160 meters southeast of the Atomic Bomb Dome.  At that time, the building was the Industrial Promotion Hall of Hiroshima Prefecture. At the time of the detonation, the explosion exerted 35 tons of pressure per square meter and created a fierce wind speed of 440 meters per second.  The building absorbed the powerful explosion and heat and then burst into flames. Because the impact occurred almost directly above, curiously, the thick outer walls and the steel dome escaped complete destruction. However, the people who were inside at that time died instantly and the inside of the building was completely destroyed by fire.

It was the sad newspaper article about a schoolgirl, Hiroko Kajiyama, which determined the decision to preserve the Atomic Bomb Dome in its current state.  Hiroko was exposed to radiation when she was a baby. She subsequently died of leukemia at the age of 16. The dome acts as a reminder of the force and unspeakable suffering caused by the bomb while continuing to symbolize the struggle to rid the world of nuclear weapons and achieve peace.

In the last three conservation projects (1967, 1989-1990 and 2002-2003), a minimum reinforcement with steel and synthetic resin was used to preserve the condition of the dome as it was after the atomic bomb attack.  The dome is in its original location and its shape, design, materials, substance, and environment are completely authentic.

If you want to hear more background stories when visiting Hiroshima and Miyajima, booking a private guide for a day will help you make the most of your visit.

It is estimated that this site was founded in 593. The original door that looks as if it w...