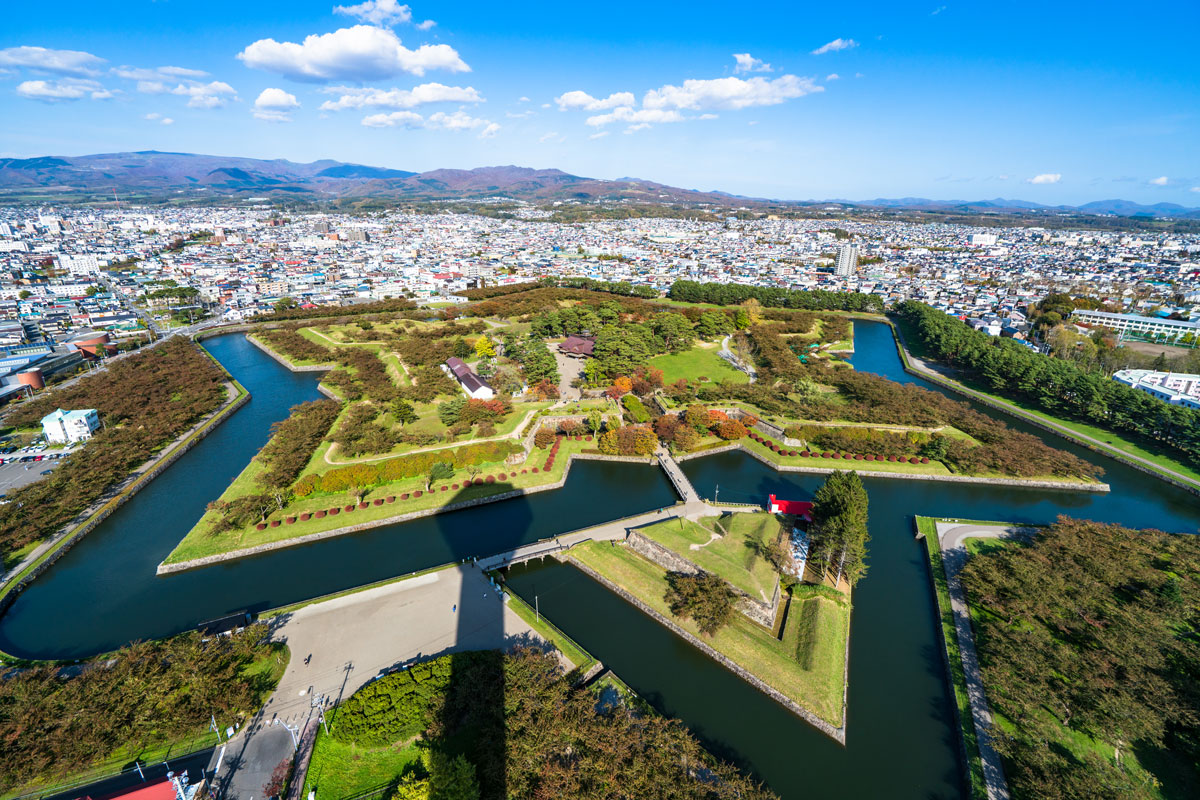 Hakodate is Hokkaido’s 3rd largest city after Sapporo and Ashikawa with a population of around 260.000 people. It is located on the southwestern part of the island, and it is especially known for its star-shaped fort Goryokaku. When Japan opened its ports more widely for foreign trade in the late 19th century, Hakodate was the first port to be opened. Hakodate became the most important Japanese port in the north and soon became the largest city in Hokkaido before it was destroyed in a fire in 1934.

Hakodate is well-loved by domestic tourists but often overlooked by foreign tourists which makes it a hidden gem. If you like green cities surrounded by beautiful countryside, then Hakodate is a great place to visit.

One of Hakodate’s main attractions is its fresh, locally caught seafood. A visit to the morning market is a must-do, as you can taste some of the best seafood in Japan. Hokkaido crab is deliciously juicy, and rice bowls with all kinds of seafood toppings make for a great breakfast or lunch. There are restaurants right next to the market from which you have a good view of the market while you eat.

The Motomachi area is a beautifully preserved city heart where you can still feel the Meiji era atmosphere in its amazing architecture and street image. There are also several churches that were used by the foreign population of that time. For more history, the Museum of Northern Peoples is also a must-see. In this museum, you can learn more about the area’s original Ainu inhabitants and other indigenous groups. The museum is housed in an old bank building that was built in 1926.

One of the most stand-out areas of Hakodate is the port area with its Meiji-era signature-style red brick buildings. In these buildings, you will find shops where you can find local souvenirs. While you are in the area, stop by Tea Shop Yuhi for a cup of tea in a charming wooden building that dates back to 1885.

For those who like hiking, a trek to the top of Mount Hakodate is a great idea between May and October. From its 334-meter summit, you will have an amazing view of the city and its surroundings, and the sunset or night views are especially stunning.  If you are not in the mood for a walk to the top, there is also a cable car that can take you there.

Goryokaku Fort, Hakodate’s most famous sight, deserves its own special mention. It is a Japanese castle with elements of Italian and French design that was built in 1864, using Western-style techniques and shaped like a five-pointed star. Because of its shape, many weapons could be placed on the walls with fewer blind spots compared to a traditional Japanese castle, making it a very modern castle for the time and location. It was used as a fortress for a short time only, as the Republic of Ezo that used it as their main fortress rose and fell within the same year in 1869.

Nowadays, it is a beautiful park and Special Historic Site that can be enjoyed in all seasons. If you want to see its star-shape clearly, you can view the park from the Goryokaku Tower right next to the park.

The Onuma Quasi-National Park is around 90 km2 large and only 20 kilometers away from Hakodate in southwest Hokkaido. There is an active volcano, Komagatake, two lakes dotted with small islands, and forests around the lakes. The lakes were created by mudflows after volcanic eruptions. It is a great park to take a day-trip to, as there are plenty of short walking courses and activities you can do such as boat tours, canoeing, and cycling in summer and snow-trekking and skiing in winter.

Otaru makes for a great day trip from Sapporo, or a nice stop along the way for those trav...