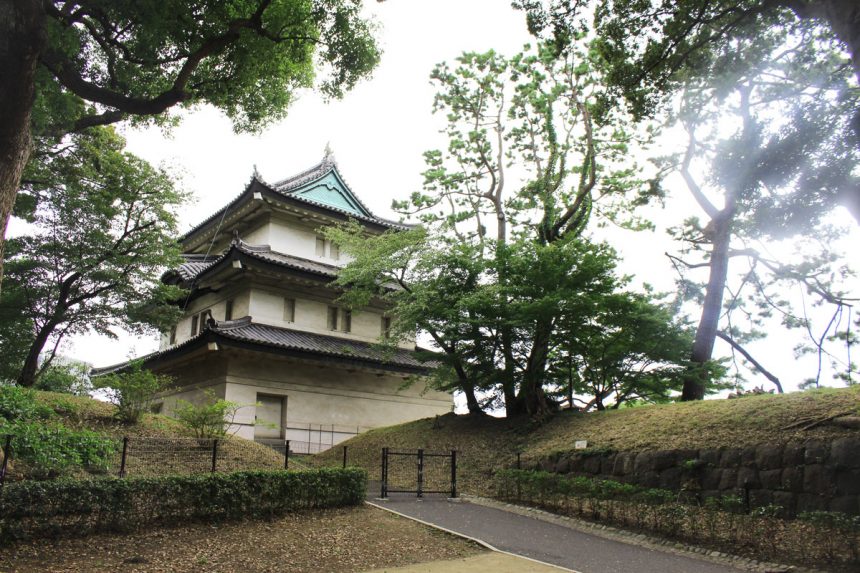 History of the Castle

Some tourists are wondering why a city like Tokyo doesn’t have its very own castle, like many smaller cities in Japan do. How is it possible that the capital city of Japan is castle-less? There was a time when this was different when the Edo castle had just been built in 1636 by the Tokugawa shogun of that time. Edo was not only the largest city in the world at that time, but Edo castle was also the largest castle in the world as well. Feudal lords were required to supply the shogun with the materials and labor necessary to complete this large work.

The ground that was dug up during construction was mainly used for landfills in the area which created the areas around the castles where merchants could settle. This greatly contributed to the growth of Edo which you can easily see if you compare city maps from the 16th century with maps of what Tokyo looks like now. A large part of the city is built on reclaimed land, mainly on the eastern side, which also makes the city vulnerable to earthquakes. What is also interesting to know is that the streets around the castle were designed to be a maze of little alleyways and dead-end streets on purpose. The very fact that the city of Edo was a maze protected the castle grounds from attack, as there were also no uncensored maps available to outsiders, and staging a large attack was impossible this way. The castle itself was more like a village in a city, with everything it needed within its walls.

It wasn’t an earthquake however that destroyed the once beautiful Edo Castle Tenshu which is the most recognizable part of the castle, its tower, in 1657. That was one of the many fires that destroyed a large part of Edo, a great evil that has been a large problem in Japan for hundreds of years as so many of its buildings are made of wood. Another fire in 1873 destroyed a lot of the other parts of the structure, and then it burned twice more after the large Kanto earthquake in 1923 and the fire bombings in 1945.

When the Meiji government took over in 1868, they ordered the eviction of Edo Castle and that was how the last Tokugawa shogun left the Palace peacefully and there was not a drop of blood spilled. In 1869 His Majesty Emperor Meiji moved the capital of the nation from Kyoto to the city of Edo and then named it ‘Tokyo’ which literally means ‘Eastern Capital’.

The new government remodeled the palace to create an atmosphere that united the tradition of Japan along with the newly arrived European fashion. The complex was very impressive in the Meiji, Taisho, and Showa ages. But unfortunately, there are not many buildings left of these times because in May 1945 the United States government gave the special order to bomb the entire palace, throwing about 2000 bombs on the premises destroying almost the entire Imperial Palace.

After the war, in a more modest way, the residence of His Majesty the Emperor was rebuilt and the gardens outside the palace became a public park where today commoners will jog around the Palace and millions of tourists travel to see this beautiful place in the capital city. The palace is surrounded by modern skyscrapers of the most loyal companies in the country. Behind the palace is the famous concert hall Nippon Budokan where national and international artists perform great concerts. Next to the Nippon Budokan is the Yasukuni Shrine, where you can often enjoy displays of Japan’s traditional arts and culture like ikebana and traditional dance.

Besides the Imperial East Gardens, you can also stroll just outside the palace grounds and marvel at the traditional Japanese architecture and beautiful moats. The palace itself is the residence of His Majesty the Emperor and Her Majesty the Empress, but the area where they live is inaccessible to common visitors. The luxury apartments where the Imperial Family lives are well-hidden in a secluded area. If you still want to see more of the grounds that you can’t access by yourself, you have to register for one of their free large group tours on the official website of the Imperial Household Agency ahead of time. During this tour, you will be able to see more of the moats, a defense house, a visitors’ house and walk a bridge not accessible to regular visitors. You will also tour the Imperial East Gardens and receive more background information on what you see. The tour lasts for a little over an hour.

Only twice per year, visitors have the opportunity to enter an area of the palace grounds that you normally can’t enter to see the Imperial Family for a greeting on January 2nd and on His Majesty’s birthday. On these special days, more than 40,000 people line up very early to enter the palace and see the appearance of the Imperial Family on the balcony of the palace. His Majesty the Emperor then makes a speech dedicated to the people of Japan and the world, wishing joy and prosperity to the inhabitants of the nation and their visitors. The Imperial Family always makes speeches and performs actions that promote learning from the past to create a peaceful future.

This is where everyone goes to take that famous picture of the Nijubashi bridge that looks like eyeglasses if the water is still and reflects the bridge. If you look closely, there are actually two bridges, a stone one, and an iron one. This is the bridge you can only walk over if you attend one of the events where you can see the Imperial Family’s greeting. Near the bridge is a statue of a samurai on a horse. This is Kusunoki Masashige, a strong supporter of one of the former Emperors. He was the one who helped the Emperor briefly grab back the power during a time when the Imperial Family was put on the backburner politically and is thus a hero for the Imperial Family. It was especially his strong loyalty that made him famous, a trait that is highly appreciated in samurai in the past, and in students and company employees in the present.

For 5 days a week, everyone can access the Imperial East Gardens for free, they are closed on Mondays and Fridays, and the days after national holidays that fall upon a Monday or Friday. Opening hours are from 9 am to 5 pm. The location of the gardens is where the two innermost circles of defense of the Edo castle used to be. Nowadays it is a space of relaxation in the middle of the urban jungle, where gardens are meticulously maintained. Visitors can also still see remnants of Edo castle, of course, there are the impressive moat walls, but you can also see the entrance gate as it looked and a few guardhouses. The foundations of where the castle tower stood are also still there, you can even climb on top of them to see the view. There are groups of people who would like to fundraise to give Tokyo its castle tower back, but until now no one could gather enough funds for rebuilding.

There is also a space with trees from every prefecture, the dream of every arborist. A bit behind the collection of different trees is the Japanese garden where you can find a pond with very healthy koi fish and a nice view of the tea house that is situated there.

The Yasukuni shrine is considered one of the most important sanctuaries in all of Japan fo...
">

It is highly recommendable to come to Japan in the period between early November to early ...
">

The Shinjuku Gyoen National Park is a large green area with beautiful landscapes that prov...