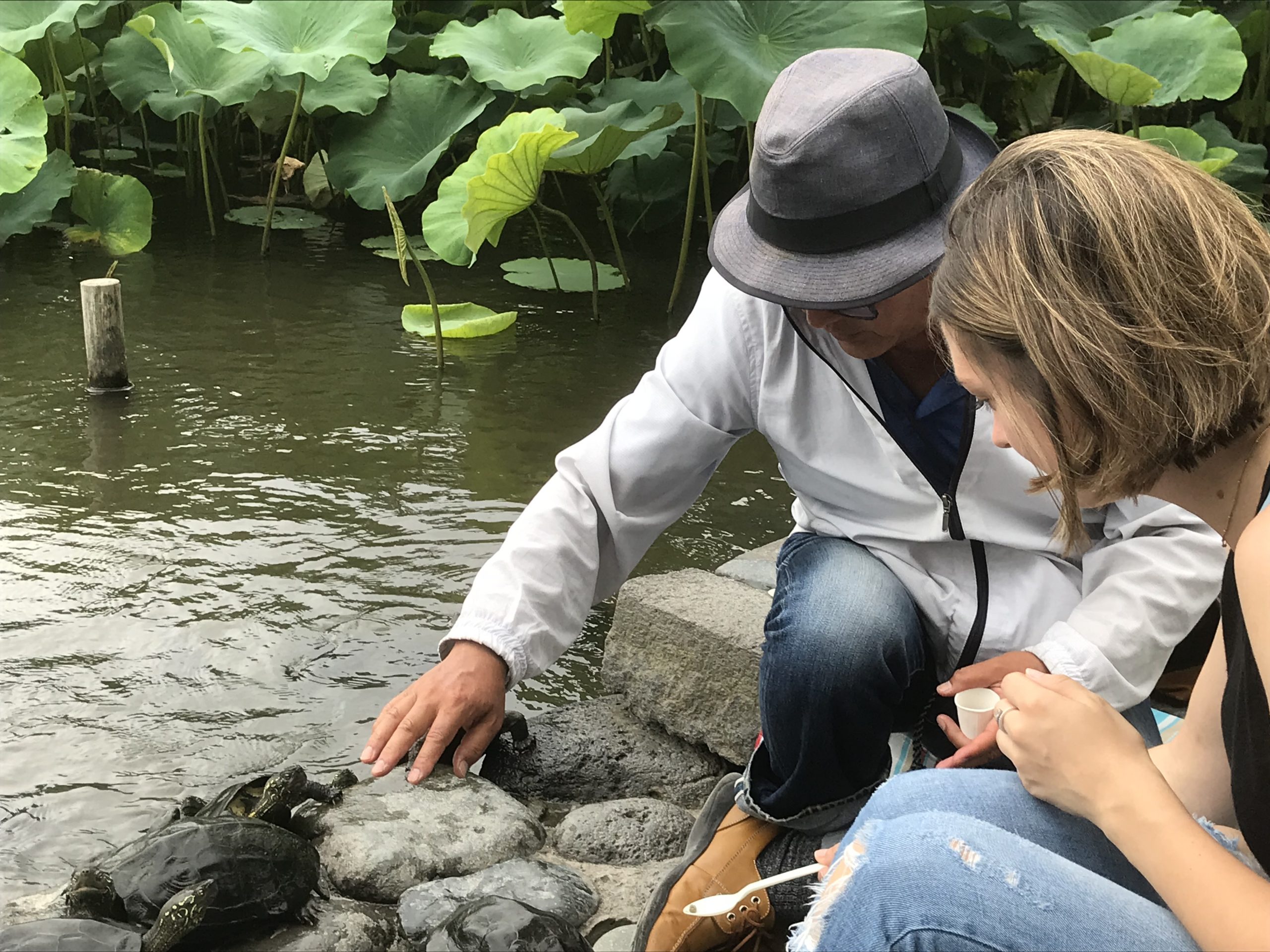 In the very middle of Kamakura sits its most important shrine, the Tsurugaoka Hachimangu shrine. This is the shrine of the family that made Kamakura into the political capital city in the late 12th century.

Once you step beyond the torii gate, you are already in the shrine. You have to then cross one of the flat bridges, and you will find a pond on both sides. They were made by the Minamoto family, and are together called the Genpei pond. ‘Gen’ stands for the Minamoto family and ‘Pei’ stands for Taira family, meaning the right-hand pond, obviously larger than the other, is for the Minamotos, and the left-hand one is for the Tairas. The Taira family was the arch-enemy of the Minamoto family. In summer, immense expanses of lotus leaves cover all of the ponds. The right-hand pond used to have white (the Minamoto clan’s symbolic color) flowers, whereas the left-side pond had blood-red ones (the Taira clan’s symbolic color). Today, each pond has both red and white flowers.

Also, the Minamoto pond is dotted with three islets, and the Taira pond with four. ‘Three’ is pronounced ‘san’ in Japanese which also denotes birth or creating, while ‘four’ is pronounced as ‘shi’, a homonym for death. The Minamoto’s hereby wished for creativity for the Minamotos and death for the Tairas. These ponds are good evidence to remind us that the two-warlord clans waged fierce battles more than 800 years ago.

Walk straight ahead for about 200 meters or so and there is a red-colored, square, roofed 1.5-meter-high stage in the center of the courtyard. This is the Ritual Dance Stage to commemorate Lady Shizuka, a sweetheart of Yoshitsune Minamoto (1159-1189), Yoritomo’s half-brother. She had to unwillingly perform a historic dance in the Shrine in 1186 to entertain Yoritomo as well as his family. Back at the time, Yoshitsune’s behavior angered Yoritomo to the point that Yoritomo ordered to kill Yoshitsune. While Yoshitsune was fleeing, Lady Shizuka was unfortunately caught and brought to Kamakura. She had grown up in Kyoto, beautiful and elegant with lots of refined Kyoto culture in her. She was also known as an excellent dancer. Yoritomo tried repeatedly to make her dance but she always turned him down. Persuaded by Masako, Yoritomo’s wife, she finally and reluctantly accepted to dance in front of Yoritomo. On the dancing stage, she sang a song expressing her deep feeling of love toward estranged and fugitive Yoshitsune, which infuriated Yoritomo badly.

Behind the Dance Stage are 61-stone-steps. On the left-hand side, there was a huge ginkgo tree of more than 1000 years old and 30.5 meters high with a root-diameter of approx. 15 meters. However, the great ginkgo tree was knocked down by the strong winds on March 10, 2010. After the research was done by specialists, the diagnosis was that there might be a slight possibility for the old tree to be revived. So, the root is still in the ground and a broken branch was cut to a certain length and replanted nearby place. As they are now watered with special care, young buds were seen from both, the original root and the replanted branch in Spring 2011.

The location of the ginkgo tree happens to be exactly the place where Sanetomo Minamoto (1192-1219), the Third Shogun and the second son of Yoritomo, was stabbed to death in 1219 by his nephew Kugyo Minamoto (1200-1219), then the chief of the Shrine, who hid behind the tree and attacked Sanetomo with a sword when Sanetomo was about to enter the Main Hall to attend a ceremony for his receiving one of the highest official titles conferred by the Imperial Court in Kyoto.

Why on earth did Kugyo assassinate his uncle? Sanetomo paid too much attention to Kyoto culture and played up to the Imperial Court, which had the authority to grant official court titles. As a result, Sanetomo was promoted too quickly and his promotion made Kugyo jealous. Secondly, Kugyo thought that had not there been for Sanetomo, Kugyo himself would have succeeded to the Shogunate chair as the first son of Yoriie, she short-lived second shogun. However, the exact cause of the assassination is not clear. Some say it was a conspiracy plotted by the head of the Hojo clan, or the father of Masako to be exact. Right after the assassination, Kugyo himself was also killed by Sanetomo’s guards.

The double-decked, red-colored tower gate you will see after climbing the 61 steps is similar to the Nio gates of Buddhist temples and is reminiscent of Shinto-Buddhist syncretism. Unlike temples’ Nio gates, which have the Two Deva kings with threatening aspects, here are two statues of Court Nobles wearing formal costumes. The Tower Gate was rebuilt in 1828 but the statues were made in 1624. In winter with leafless trees, this spot affords a good view of the Wakamiya-oji main street toward the south.

The building is made of two parts, the Haiden or the oratory hall in front, and Honden of the inner sanctum, which is the most sacred part of the entire shrine. The Haiden is the place where all kinds of ritual ceremonies and worships are performed.

The Hachimangu Shrine is dedicated to Emperor Ojin (?-310), the Fifteenth Emperor in the early 4th century (the current emperor is said to be the 126th) together with Empress Jingu, and is widely worshiped as the god of warriors.

The Minamoto clan were descendants of the imperial family. To be more specific, they were the descendants of the 56th Emperor Seiwa (850-880), and Hachimangu was Emperor Seiwa’s tutelary deity. Thus, Yoritomo as a descendant of Emperor Seiwa became a pious adherent of Hachimangu. Initially, the Shrine had been built by Yoriyoshi Minamoto (985-1078), Yoritomo’s great-great-grandfather, near the beach of Kamakura in 1063, and it still exists as the Yui Wakamiya Shrine. It was too small, however, to show off Minamoto clan’s muscles, therefore Yoritomo built a new Hachimangu shrine on its current location and named it Tsurugaoka Hachimangu.

The vermillion main sanctuary was rebuilt in 1828 by Ienari Tokugawa (1773-1841), the 11th Tokugawa Shogun. The Tokugawa family claimed they were offspring descended from the Minamotos, and protected the shrine. Vermillion color dominates the whole wooden structure making a beautiful contrast with the verdure of the surrounding trees.

The style of architecture is called Gongen Zukuri, or consisting of two structures, or two gable-roofs in tiers, the oratory in front and the sanctum at the rear, which convey an extraordinary sense of majesty and power. The sanctum does not contain any statues like those of temples. It is adorned with symbolical objects of worship such as a mirror made of polished metal, a sword (both are regalias of the imperial family), a tablet, and zig-zag cuts of a white paper called Gohei.

There is a traditional manner to pray before the Haiden of Shinto shrines: Bow twice, clap your hands twice and bow once again. A money offering is also needed before praying. The rich throw a 10,000-yen bill or two, but most people toss in a 10-yen coin. I don’t think any gods ever discriminate worshipers depending upon the amount of money they offer. Inside the oratory, some people may be sitting on the tatami-mat floor. They are here to ask Shinto priests to pray to the shrine god for their well-being such as family safety, business prosperity, recovery from illness, etc. A busy season for the Shinto priests is early to mid-November, when families having children whose ages reach seven, five or three usually visit the Shrine clad with beautiful kimonos or dresses coupled with their parents, and have the priest pray for their good health and bright future. The ceremony is called Shichi-go-san, or Seven-five-three.

On New Year Day, the shrine sells Hamaya, or exorcising arrows, as good-luck amulets. It is a bestseller and 250,000 of them are sold every year.

On the left-hand side of the Main Hall is an entrance to the corridor-type Treasure House where the shrine’s valuable objects are exhibited. Included are seven portable-shrines made in 17th to 18th century, ancient swords, two of Yoritomo’s sedentary statues, a folding screen on which various stages of war between the Minamoto and Taira clans are depicted, a twelve-layered robe for court ladies, a suit of armor, ancient brush-writings and various wooden masks.

Notable artwork is a lacquered inkstone case decorated with laminae of mother-of-pearl depicting chrysanthemum flowers with flying birds. The case was a gift conferred on Yoritomo by Emperor Goshirakawa (1127-1192). The gold lacquered quivers of mother-of-pearl work and black-lacquered arrows are also renowned.