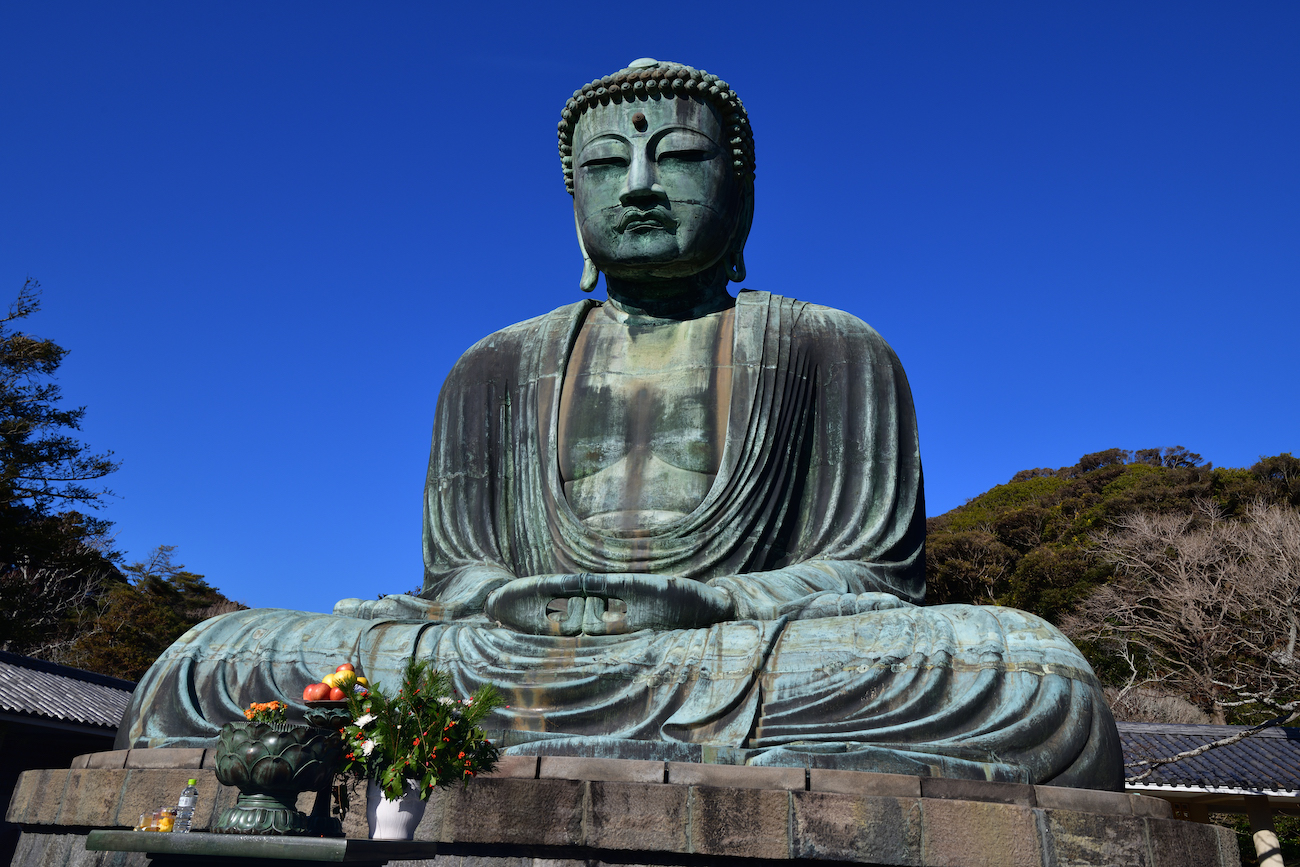 For foreigners, the most well-known symbols of Japan are Kyoto’s Golden Pavilion, the red Shinto gate of the Itsukushima Shrine standing in the sea near Miyajima, and the Great Buddha of Kamakura, a bronze giant sitting in the open air. These sights have been countless times reproduced on front covers of guidebooks. And thanks to his fame, the Great Buddha has come to symbolize all Buddhas, although in reality there are many different types. The Amida of Kamakura, with his peaceful and merciful countenance, sitting in quiet meditation, has become the archetypal Buddha.

Kamakura’s colossus is not the only Great Buddha in Japan. Five hundred years earlier, Todaiji’s Great Buddha saw the light in Nara and apparently served as inspiration. There are even closer links. The first Kamakura shogun, Minamoto no Yoritomo (1147 – 1199), sponsored the rebuilding of the Nara Buddha that had been devastated by his enemies in the civil war that led to his coming to power. In 1195, he, therefore, attended the religious ceremonies with which the restored Nara Great Buddha and Todaiji were inaugurated.

At that time, he may have received the idea to set up a large Buddha also in Kamakura, the seat of his new military government. In the end, it was a pious lady of his court, Inada no Tsubone, who with the help of the priest Joko did the fundraising necessary for the project.

Consequently, in 1243, after five years of work a wooden Great Buddha was finished and enshrined in a hall on the present site. Wood may have been used because it was less expensive, or simply because the Japanese preferred the warmth of wood to the colder bronze (most Buddhist statues in Japan are made of wood, except the earliest ones, when under continental influence bronze, lacquer and clay were widely used).

The first Great Buddha did not last long. Only a few years after its inauguration, a storm blew away the temple and severely damaged the image. Rebuilding soon began and now it was decided to cast the new Buddha in bronze. This Buddha is the present one, and it was finished in 1252.

Thanks to the strength of its material, the Great Buddha has survived the ages. Not so the wooden temple structure that provided a house for him. It was wrecked by a storm in 1335, although not wholly destroyed. The finishing touch was left for a tidal wave, a tsunami, that raced through the Hase valley in 1495. All vestiges of the temple were swept away by the mass of water, but the heavy statue survived intact.

Since then, Buddha has been sitting unsheltered, without any protection above his head. As the military government had fallen and power had shifted away from Kamakura, it was no longer possible to collect the funds for the rebuilding of the massive wooden hall.

This may have been for the best. After all, what is more impressive and beautiful than Buddha reposing under the blue dome of the heavens, with the green forested hill at his back? This is the natural environment for the Amida.

The entrance to the temple is ingenious. A gate closes off the compound from the street. At the ticket office, the view of the inside is obstructed by intentionally planted shrubs. Only when you step around those shrubs, the Great Buddha sitting at the end of the wide, white courtyard fills your view. It is a scene so beautiful that it always stirs something inside. Even the large number of noisy spectators is nullified by the size and majesty of the Buddha.

The statue is more than 11 meters high, and its widest circumference at the base is almost 30 meters. It weighs 93 tons. There are 656 stylized curls adorning his massive head, which on purpose has been cast larger than normal, as otherwise it would have seemed smallish from below. The horizontal lines running through the statue and the face are the places where the different sections of castings were brazed together. The elongated earlobes of the Buddha denote sanctity, the boss on the forehead symbolizes his power to illuminate the whole world.

The Merciful Buddha of Western Paradise I stand in front of the Amida. He is the merciful Buddha of the Western Paradise, the Pure Land, where all people who sincerely call on his name and have faith in him, will be reborn. I have met him in Kotokuin and Honenin in Kyoto and felt his presence in Higashi Honganji. In Kotokuin, he is shown as presiding over this Pure Land, his hands resting in his lap forming the meditation mudra. Standing before the image, at only 3 to 4 meters distance, Amida seems to enfold and comfort me.

Amidism was a new direction in Japanese Buddhism, which gained popularity in the Kamakura period, thanks to the activities of great priests as Honen and Shinran. The essence of their doctrine is that man is incapable of attaining Enlightenment by his own efforts. In the days of the historical Buddha self-discipline was the ideal, but people in the late Heian and Kamakura ages believed they were living in the degenerate times of the Latter Days of the Law (Mappo).

The only alternative was to place faith in the mercy of the Buddha Amida who made a vow to save all sentient beings, even the wicked if they had sincere belief. Amidism took Buddhism out of the cloisters and aristocratic mansions and into the streets and villages. It became (and still is) the most popular form of Buddhism, with the largest number of followers all over Japan.

So, Amida remains seated ‘amid the dew’, as the Japanese poetically call it, having survived many centuries of storms and earthquakes. Open to the elements, he seems to live with them. On rainy days, the copper takes on a deep green hue, while under the bright sun he looks gray-blue. It is natural to sit out there, seemingly larger than the green hill behind him, in that pose of infinite serenity. It inspires confidence: all worries evaporate faced with this immense mass of tranquility.

In the very middle of Kamakura sits its most important shrine, the Tsurugaoka Hachimangu s...