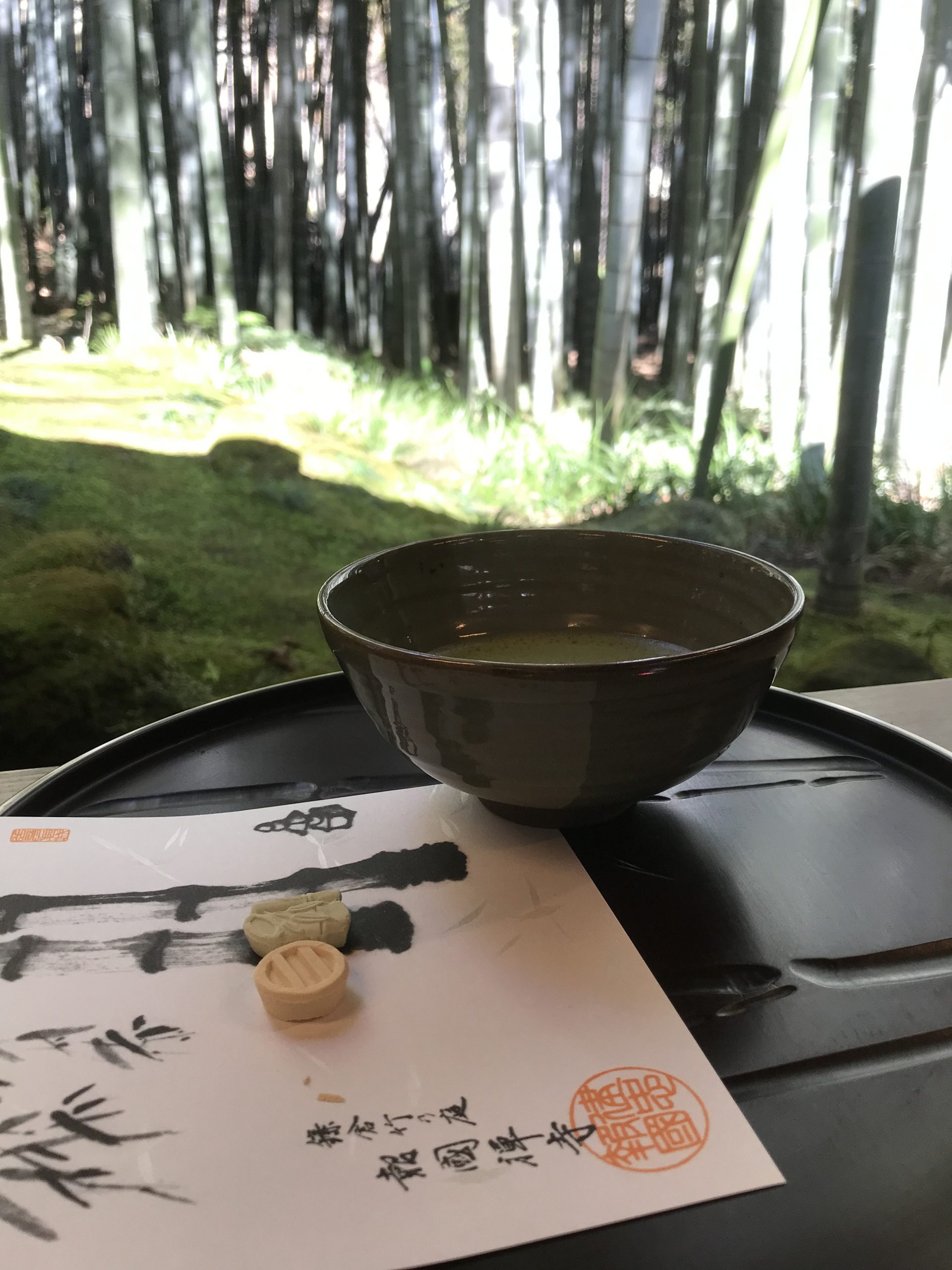 Today, Kamakura is a very popular tourist destination. Located by the sea, Kamakura is a haven of peace and quiet. The beach will revive the spirits and relax the mind. It was the cultural and political capital of Japan from 1192 until its bloody and violent razing of 1333, meaning Kamakura is a treasure trove of eccentric temples and interesting shrines.

The most famous and revered sight in Kamakura is the Great Buddha who meditates calmly under the sky, framed by trees and groups of camera clicking tourists. He has survived fires, floods, tidal waves, typhoons, and even the great earthquake of 1923. But still, he sits casting his serene gaze over the surrounding hills, a figure of salvation.

Tsurugaoka Hachimangu is Kamakura’s most important shrine. It was founded by Minamoto Yoriyoshi in 1063 and enlarged and moved to its current site in 1180 by Minamoto Yoritomo, the founder and first shogun of the Kamakura government. The shrine is dedicated to Hachiman, the patron god of the Minamoto family, and of samurai in general. The deified spirit of ancient Emperor Ojin who has been identified with Hachiman, Empress Jingu, and Emperor Chuai is enshrined in the main building of the Tsurugaoka Hachimangu Shrine.

History of the Hachimangu Shrine

Yoritomo Minamoto (1147-1199), the founder of the Kamakura Shogunate and the first Shogun in the Kamakura Period (1185-1333), overwhelmingly defeated the rival clan of Taira in 1180 to become the military ruler of Japan and set up his home town in Kamakura. The first thing he did after his victory was to build a grand shrine of Hachiman, the tutelary deity of the Minamoto clan, and revere it as the God of War, to demonstrate his supremacy as a new leader.

There was, and still exists, a small shrine established by his ancestor near the Kamakura beach. As a replacement for this old shrine, he constructed a new one at the present site in 1180. Unfortunately, it was destroyed by fire in 1191. He immediately began reconstruction of the new shrine and this is the origin of the present-day Tsurugaoka Hachimangu shrine.

Before the Meiji Imperial Restoration of 1868, the Shrine was a large complex of religious structures that mixed elements of Shinto and Buddhism under the concept that Shinto deities were a manifestation of Buddhism divinities. Most important was the identification of the Sun Goddess Amaterasu with Buddha Mahavairocana, harmonizing the teachings of both religions. In other words, it was a syncretized mixture of Shinto and Buddhism (of the Shingon sect in particular) and therefore, the shrine had been called the Tsurugaoka Hachimangu.

In its golden days, the shrine had as many as 33 structures including those for Buddhists. If anything, Buddhists had more power than Shintoists, as the Shrine was for the most part managed by Buddhist priests.

The new government after the Meiji Restoration, however, purged Shinto of Buddhist elements or ordered to clearly segregate Buddhism from Shinto, making the latter as the state religion. As a result, many valuable structures and statues of this shrine that were associated with Buddhism were burned down, destroyed, sold cheap overseas, or thrown away. Some were fortunately moved to other Buddhist temples. The Deva King Gate, for example, was relocated to the Jufukuji.

From the Meiji Restoration up until the end of WW2, the shrine had been run by an agency of the national government. After the war, it became an independent religious institution. With its historic background, the Shrine is one of the three largest Hachimangu shrines in Japan following the Usa Hachimangu in Oita Prefecture, and Iwa Shimizu Hachimangu in Kyoto, drawing roughly 10 million visitors every year. On New Year Days, two million people visit this shrine in just three days.

By JR – Japan railway – to Kamakura

The JR Yokosuka Line takes less than one hour and costs 890 yen from Tokyo station to Kamakura. It also stops at Kitakamakura Station.

From Shinjuku, direct trains on the JR Shonan- Shinjuku Line require about one hour and cost 890 yen to Kamakura. Only trains bound for Zushi, that is roughly every second train on the Shonan Shinjuku Line, provide a direct connection to Kamakura. Otherwise, a transfer of trains is required at Ofuna Station.

JR offers the Kamakura Enoshima Free ticket, which includes the round trip from Tokyo to Kamakura and unlimited travel of local transport in the Kamakura area for 1970 yen.

The cheapest way of visiting Kamakura is by Odakyu’s Enoshima Kamakura free pass, which includes the round trip from Shinjuku to Kamakura and unlimited usage of the Enoden train for only 1430 yen. Note, however, that the journey to Kamakura, using this pass, takes at least 90 minutes, compared to about 60 minutes by JR.