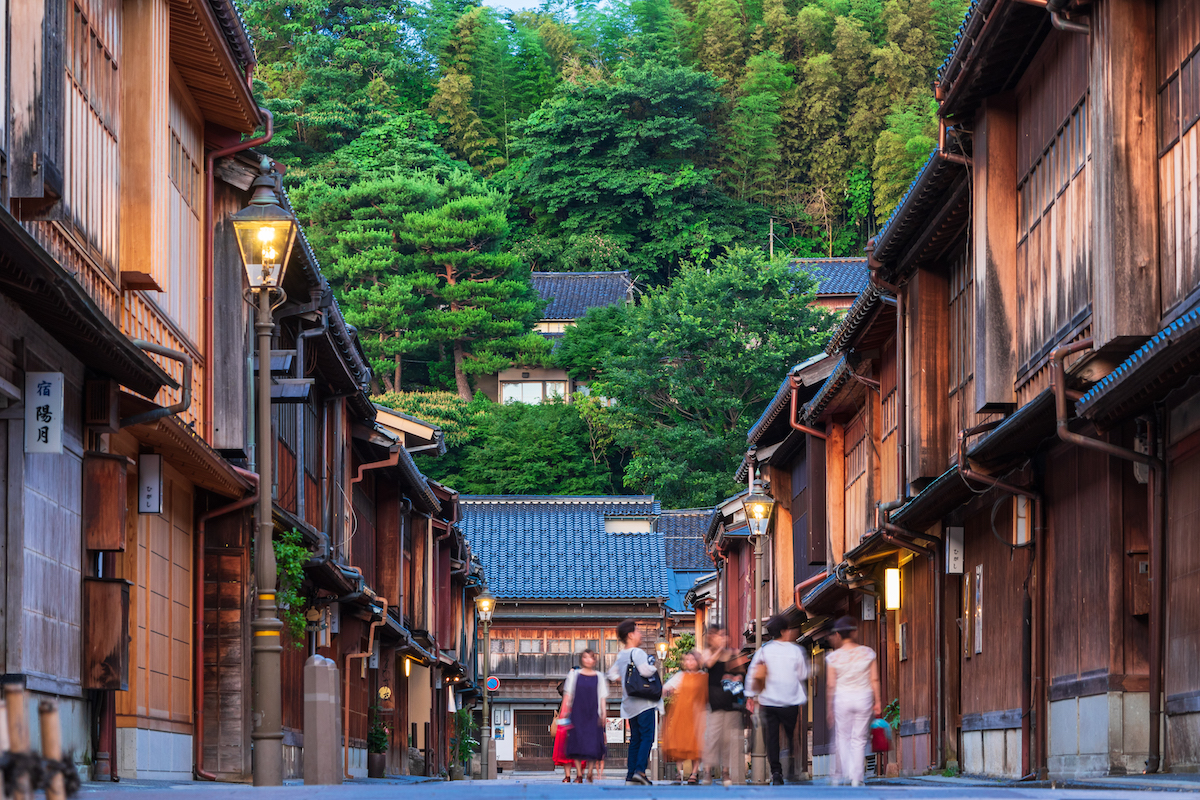 Kanazawa is made up of three hills, the Kodatsuno Plateau that stretches southeast between the Asanogawa and Saikawa rivers, and Mt. Utatsuyama and Teramachidai, which spread out on both sides. Kanazawa is the center of economy, commerce, and culture in the Hokuriku region. Kanazawa has prospered for some 300 years since feudal lord Maeda Toshiie built a castle here in the late 16th century.

At the center of the city lies the Kenroku-en Garden, famous for the yukitsuri ropes stretched from the top of a tree to the lower branches like an umbrella to protect it from snow damage. Beginning in 1676, it took about 170 years to construct the 105,000-square-meter garden. Kenroku-en is one of the three most famous gardens in Japan, along with the Kairaku-en in Mito and the Koraku-en in Okayama. But there is more to see besides this amazing specimen of Japanese gardens.

One of the best fresh fish markets in Japan is in Kanazawa, the Omicho market. It is especially recommended to visit early during lunchtime, the best places will have long lines in front but it is worth the wait. After a memorable lunch, you can head to Higashi Chaya, the old teahouse districts where geisha do their age-old work. In this beautifully preserved district, you can not only take the most amazing pictures, but you can also go inside some of the shops to have a cup of matcha tea with gold leaves or buy exquisite souvenirs. As Kanazawa is known for its gold production, you can do several workshops creating something using gold or visit the Yasue Gold Leaf Museum.

If you want to learn more about Zen and its incorporation in architecture, the D.T. Suzuki Museum is a must-visit. It is a great place to contemplate and take some rest. Finally, the Nagamachi area is nice to walk around and see some of the old samurai houses.

One place that gained interest amongst the international tourist crowd has been the Myoryuji, better known as the Ninja temple. It is, however, difficult to gain entry if you don’t make a reservation with the help of a Japanese speaking person. If you would still like to visit, and if you want to have a smooth and educational trip to Kanazawa in general, it is highly recommended to get a private guide for a day.

Kenrokuen is a place to walk and recreate before the image of a beautiful landscape garden typical of the Edo period (1603-1868). Originally, the outside garden of Kanazawa Castle was located on the slope in front of this building. In 1676, the fifth feudal lord Maeda Tsunanori moved the house from the garden to the castle. He built a rest home called Renchiochin and began designing the Renchi-tei garden in the surrounding area.

However, the rest house and garden were burned in 1759. The eleventh feudal lord Harunaga restored the garden, creating the Midoritaki waterfall and the Yugaotei Tea Room in 1774. In 1822, the twelfth feudal lord Narinaga erected the magnificent Villa Takezawa on the Chitosedai high plateau southeast of the castle, although there were the houses of seven servants and the clan school. He developed the garden by creating winding streams with water from the Tatsumi System and building stone bridges in them.

In the year of completion of the Takezawa Villa, the garden received its name because it is the combination of the six attributes of a perfect landscape garden: breadth, seclusion, artifice, antiquity, watercourses, and panoramic views. The name derives from a gardening book written by Li Gefei, a famous Chinese poet.

Feudal lord Narinaga died two years after finishing the Takezawa Villa. Subsequently, the village was destroyed, and there, thirteenth feudal lord Nariyasu expanded the Kasumigaike pond, adding some meandering streams that harmonized with the Renchi-tei Garden. This completes the basic structure of this extensive landscaped garden designed for walking. On May 7, 1874, when the domain system was abolished, the Kenrokuen Garden was opened to the public. It was then declared National Property of Landscape Beauty on March 8, 1922, and, National Property of Special Landscape Beauty on March 20, 1985.

Some of the most important points of the garden are the Karasakinomatsu Pine; the cherry tree chrysanthemum Kenrokuen; the meandering creeks; the Ishikawamon Entrance; the Yugaotei building; the Funsui fountain and the flying wild geese bridge, among many other things. Kenrokuen Garden is listed as one of the three most beautiful gardens in all of Japan and is undoubtedly the symbol of Kanazawa Prefecture.

In the prefecture of Kanazawa there is a district where you can see the house of the Samurai Nomura clan. The building is almost intact and is a sample of how the samurai warriors who protected the Kanazawa village lived.

In 1583 feudal lord Maeda Toshiie took power from Kanazawa Castle and established a period of peace that lasted for three hundred years. At that time, Samurai Nomura Denbei Nobusada was upgraded and received a property of 3,305 square meters. The Nomura family maintained their status until generation 20 when the Meiji restoration (1868) occurred. At the beginning of the renovation, the entire feudal system under which Japan had lived for hundreds of years, was abolished, and almost all samurai houses were destroyed, converted into farms, or sold to the highest bidder. So the Nomura family suffered the same fate.

Although some of the parts were sold or modified, the Nomura’s house is now open to the public. Visitors are expected to imagine the prosperity of ancient times through the wonderful architecture and, at the same time, have an idea of ​​what the life of the ancient Japanese was like, looking at the beautiful garden attached to an official house of a samurai. Furniture, interior, artifacts, such as Senkei Sasaki’s works of art, ceilings, and doors, have a high cultural value. Sitting in the chamber of Jyodan-no-ma (the room of the Lord) and his studies, you can enjoy the beautiful garden that was so cleverly designed. With an exquisite waterfall, a clear and sinuous current that crosses several stones, a bridge made of cherry granite, several types of lanterns that illuminate the garden, and a tower of many floors arranged here and there. In addition, there is a unique Myrica of more than four hundred years that, it is said, is difficult to plant in the Hokuriku district.

This garden is very honored as one of the most typical works among the so-called Kobori Enshu style gardens. So now, people who go to this place can fully appreciate the cultural heritage of Japan in Kanazawa Prefecture. Visitors can enjoy Japanese green tea (matcha) on the second floor. To respect nature, the tea room is very small. In the house, there is a traditional Japanese altar, sliding doors, tatamis, and scrolls with Samurai calligraphy, original armor, and many other interesting things to see.

Niigata city is the capital of the prefecture of the same name, and is a pleasant place, w...
">