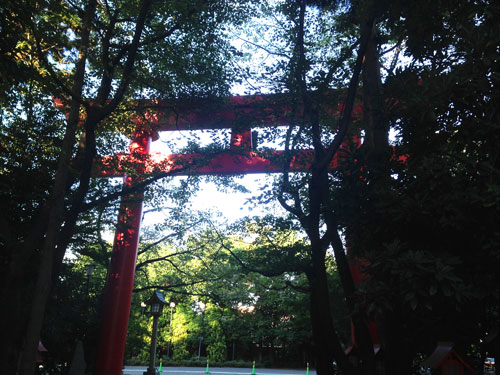 Located in the prefecture of Gunma, in the city of Ota, there is a beautiful sanctuary that delights visitors who are coming here to pray. Its name is Kanmuri Inari Jinja, and it is one of the sanctuaries that make up the network of places that have Shinto god Inari as their main deity. This sanctuary also venerates the 7 gods of fortune in the Shinto religion: Ebisu, Benzaiten, Daikokuten, Fukurokuju, Hotei, Bishamonten, and Jurōjin.

Ota has designated the main sanctuary and the main hall as significant historical and cultural places. The sanctuary of Kanmuri Inari was founded 800 years ago. The front sanctuary and the main hall were built about 300 years ago. They are dedicated to Ukanomitama-no-Mikoto, the deity of harvest who is also a business deity. Historically in Japan, having a good harvest leads to wealth. The Kanmuri Inari shrine is also well known for the marriages performed there.

The entrance door of a Shinto shrine is called a torii gate. The torii gate of this sanctuary is 12.5 m high and 18 m wide and is said to be one of the largest in the prefecture. This torii gate is called Kinoe which indicates the northeast, and also means ‘first’,  and is the east gate of the rising sun.

In particular, during the flowering period of the cherry trees, at 9:00 p.m., the door and the surrounding area are illuminated which makes for a pretty sight in combination with the flowers. The enclosure has 10 beautiful buildings dedicated to various gods.

There are many small sculptures of Inari foxes around the entire enclosure. The foxes are the messengers of the god Inari in the terrestrial world. Here you can also find a special bell to break all the bad luck and balances your life. The sanctuary is surrounded by nature, giving a striking contrast between the vermilion color of which most of the buildings are painted, together with the pure green of nature.

This sanctuary is famous for the Japanese quince, the ‘boke’. This protected plum blossoms bloom in spring. There are many varieties of the Japanese quince; those in the sanctuary are vermilions. It is said that about 400 years ago, an infertile wife would pray in the sanctuary every day. One day, a messenger of the gods appeared and said: “you should take boke extract and you will become fertile”. She did it and got pregnant. She planted a Japanese quince as a token of her gratitude. Although there seems to be only one tree, it is actually 400 trees that have grown together in a group. People come here to pray for conception, easy childbirth, and for a healthy body and mind.

The Kanmuri Inari is a jewel that deserves to be visited.

The seven gods of good fortune have been worshipped for many years by the Japanese people....