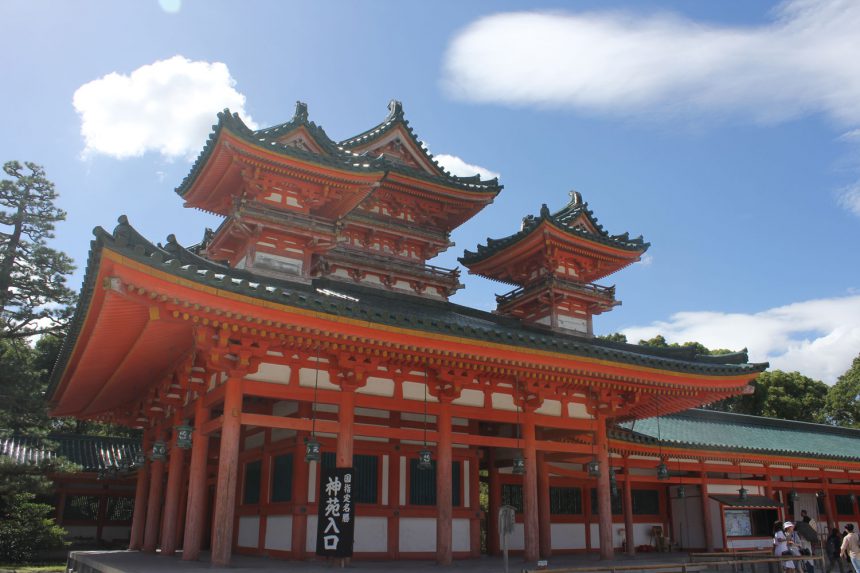 The Heian Jingu shrine was instituted in 1895 to commemorate the 1,100-year anniversary of the return of the capital to Heian (today’s Kyoto) and consecrate Emperor Kanmu, as it was him who ordered this return. In 1940 (the year 2,600 since the first emperor came to power), the spirit of Emperor Komei, the 121st, and the last emperor to live in the capital of Heian, was consecrated here together with Emperor Kanmu. Therefore, these figures and this sanctuary became widely revered as the deities of Japanese culture.

The main building of the sanctuary is a replica of the Chodoin, identical to the Heian Palace, built on a 5/8 scale of the original. The magnificent shape of the current sanctuary of Heian Jingu is composed of several original structures built in 1895, such as the Daigokuden (main hall), Outenmon Gate, and Soryuro, Byakkoro, corridors, and Ryubidan that have been renovated or rebuilt over the years. In December 2010, Japan designated 6 structures, including the Daigokuden, as an Important Cultural Property along with the Great Shrine Gate (Otorii) 24.4 meters high along the road to the sanctuary, which was designated as Tangible Cultural Property. 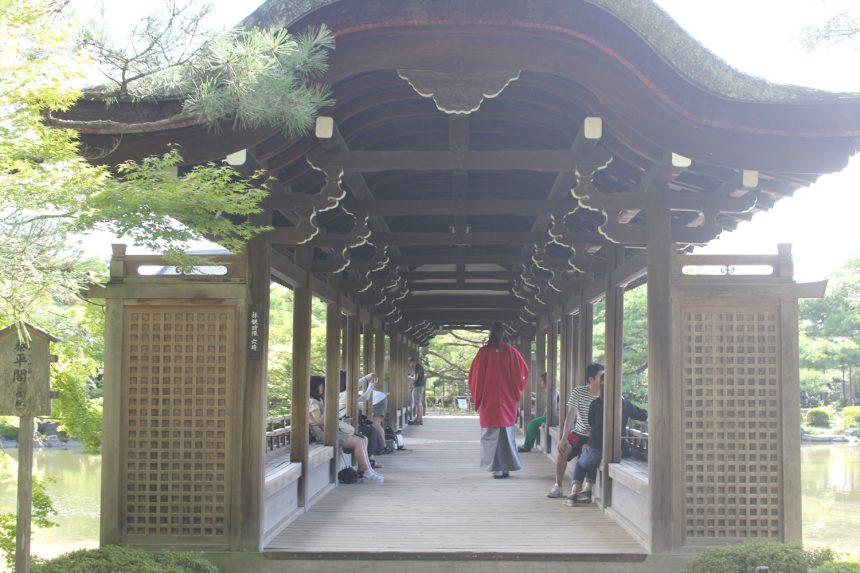 The Shin-en Garden within the grounds of the Heian Jingu Shrine is known worldwide as one of the most famous gardens that were created during the Meiji period. The garden surrounds the main building of the sanctuary and consists of 4 parts: Shin-en Higashi (east), Naka (center), Nishi (west) and Minami (south). The vast garden, designed by the famous landscape gardener Jihei Ogawa VII, is approximately 33,000 square meters and in its style presents a path around a pond. It was designated as a place of scenic beauty by the Japanese government in December 1975 to show the spirit of all the gardening techniques that were collected during the 1,000 years in which Heian-kyo (modern Kyoto) was the capital of Japan.

The magnificent Shin-en garden exhibits a different but equally charming side during each season, from cherry blossoms in spring, Japanese lilies in early summer, fall foliage in autumn, and snowy landscapes during winter. 100 years since its creation, today it became a space that invites visitors to the world of the Heian period and see the greatness of nature.

With a height of 24.4 meters ( around 80 feet), the large torii gate that extends on both sides of the sandō street of the Heian Shrine dominates the nearby horizon. Attracting visitors through Okazaki Park to the vermilion gate of the sanctuary, this torii was the largest in the country when it was built, and remains the tallest in Kyoto. Completed with special construction techniques to secure against earthquakes, the sturdy door legs are 3.6 meters (11.8 feet) in diameter.

Due in part to Chinese design, the influence of the divine beasts of the four cardinal directions, Suzaku the red phoenix (south), Byakko the white tiger (west), Seiryū the blue dragon (east) and Genbu the black snake -turtle (north), abound in the sanctuary grounds. Once you enter the Ōtenmon Gate, you can see stone fountains that represent a tiger and a dragon, on your left and right, and the ‘towers’ at the ends of the main hall are called Sōryūrō and Byakkorō, the ‘Tower of the Blue Dragon’ and the ‘White Tower of the Tiger’. If you look more closely at the lanterns hanging on the eaves and the walkways, you will notice that the four gods also appear there, their silhouettes carved on the sides of the bronze lanterns.

Heian Jingu is a great place to visit during your stay in Kyoto. It is a beautiful large place full of peace.

The Chion-in temple in Kyoto is a Buddhist temple and is the home of Jo-do Buddhism, found...
">

Kodaiji Temple is located in Higashiyama. It was founded in 1605 by Kita-no-Mandokoro as a...
">