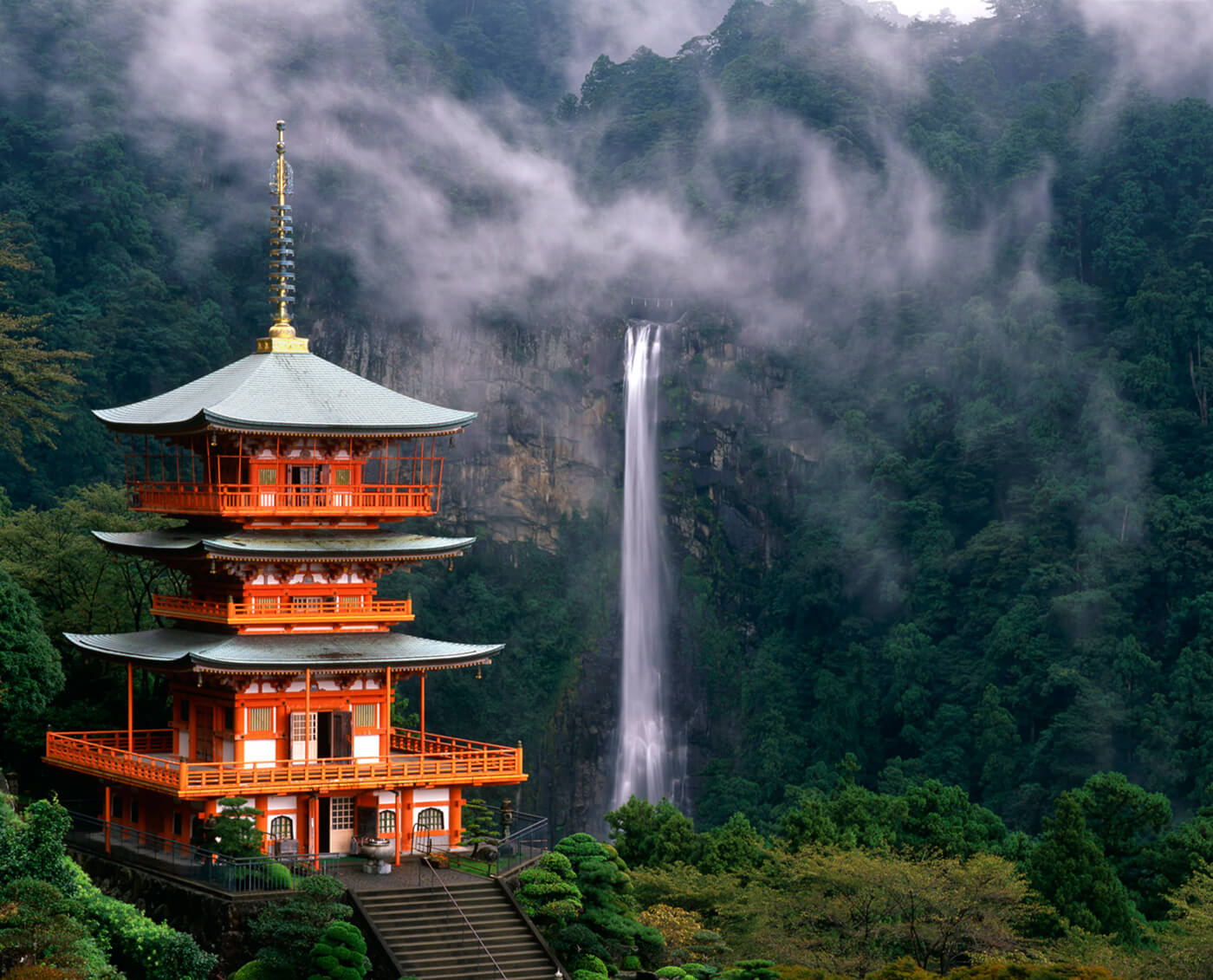 The Kumano Kodo is a pilgrimage route in the Kii Mountains. The routes radiate centering around Kumano Three Shrines; Hongu, Hayatama, and Nachi. The total length is about 1,000 km.

The way is dotted with shrines called Oji and people headed to the shrines to pray at them. These are steep mountain routes that used to be called “Ant procession to Kumano” because so many people from Imperial family members to commoners passed these routes. There used to be a lot of accommodations and tea houses on the way too. After the construction of new roads, the number of walkers decreased and most of the tea houses were closed, but you can feel a quiet and sacred atmosphere while walking.

Kumano Hongu Taisha is the central shrine of all three Kumano Shrines. You have to walk up 158 steps to the main hall from the bottom. It is surrounded by the trees, so you will feel as if you are in the deep mountains.

It is said that it was constructed more than 2,000 years ago at the time of the tenth emperor, Sujin. The original site is called Oyunohara. Here you can find Japan’s biggest torii gate (Shinto gate)  which is about 34 meters high to commemorate the sacred site.

Because the Oyunohara is among the river, the shrine at the original site was damaged in 1889 by the flood and moved to the current shrine site.

The interesting symbol of the shrine is the bird Yatagarasu which is a crow with three legs. By the legend, this crow guided the first emperor Jinmu of 7 century B.C. from Kumano to Yamato, the capital. You will see these images at the shrine. Nowadays, Japan Football Association uses this as their symbol mark.

It is called Hayatama because they enshrines Hayatamanoo who was a son of Izanaginomikoto, the founder of Japan. It is also called Shingu (new shrine) because it is newer than the Kamikura Shrine which was constructed as the the place where god of Kumano first landed. Not like Hongu Taisha, it is easy to access because of the location only 2 km away from the Pacific Ocean.

Kumano Nachi Taisha is very photogenic place. It is a large complex with the main shrine and Seigantoji Temple and Nachi Waterfalls. The Shinto shrine and Buddhist temple building are standing next to each other. It is an idea of syncretization of Shinto and Buddhism. So they live in harmony.

The Nachi Falls is a highest waterfall in Japan. The height is 133 meters. The waterfall itself is like a god in the idea of Shinto. So it is a sacred place.

You can take a very nice photo including waterfalls with three storied pagoda. It looks really Japanese.

There are many ways to enjoy walking along the Kumano Kodo. If you want to do a full-scale walk, you can start from Kii-Tanabe and finish at Kii-Katsuura, which is 60 km in total. You could do this in 4 days and include Hongu and Nachi Taisha. There are family type inns and hot springs on the way, so you can walk the route while relaxing like ancient people.

Matsuyama is the biggest city in Shikoku with many tourist attractions. Matsuyama Castle, ...
">