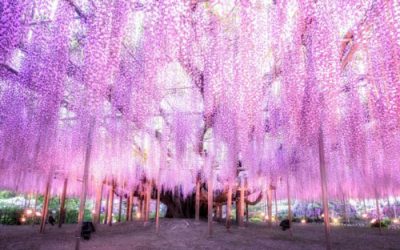 Located in Tochigi Prefecture, Ashikaga Flower Park is a world-famous park for its wide variety of Wisteria flowers in all their magnificence. Glycine is a climbing plant that leaves beautiful flowers hanging. Not only can you observe these wonderful flowers in their different states and colors, but they are also decorated as a great work of art, giving the viewer a magnificent view. The park can be reached by train from Tokyo in less than 2 hours, and trust me when I say that it is worth the trip if you go during the blooming season or during the light-up season. 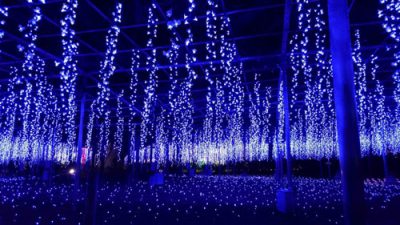 The park has wisteria trees that are 130 years old, and in spring the flowers are at their best, which makes this park very popular with visitors from all over Japan. What’s even more impressive and beautiful is the special event that takes place from November to February each year. It is a light-up event called Flower Fantasy that takes place at night in the wintertime. 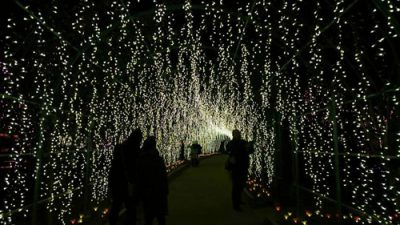 This event sees all the flowers decorated with LED lights, but it is not just lighting, it is a work of visual art that ranges from synchronization with music to sanctuaries made only of light. A castle awaits those who want to feel like they are in a fairy tale, along with a float made of lights that resembles the float from the movie Cinderella. In some parts of the park, the constellations of the sky are shown, reflected in light. Arranged on the lakes there are pyramids composed of lights and flowers.

A segment dedicated to the trip that Santa Claus makes throughout the world can be seen in the walls of the park through the lights. The beauty of this lit-up park is indescribable. Each part of the park shines with such beauty and there are so many themes that it is difficult to choose one favorite section. The park is aimed at couples who are looking for a romantic date out of the ordinary, as well as families who want to enjoy a special adventure.

Ashikaga Flower Park during its event Flower Fantasy is one of the most beautiful illuminations in all of Japan and thanks to current technology it looks like fantasies do come true! 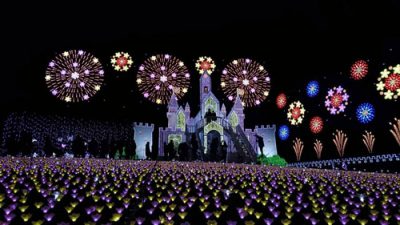 Ashikaga Flower Park is closed on the third Wednesday and Thursday of February and on December 31. Apart from these three days, it is open every day of the year.

It is open from 9 am until 6 pm between the beginning of March until the end of November.

It is open from 10 am until 5 pm from the end of November until the beginning of March.

However, please note that the hours change during the ‘Wisteria Flower Story’ season from mid-April to mid-May, and during the ‘Flower Fantasy’ lighting event from late October to early February.

Nagoya doesn't feature heavily on foreign tourists' itineraries, but If you would still fi...
">

A Virtual Tour of Tokyo

Tokyo virtual tour is for anyone who would love to travel to Japan one day and get a bit o...
">

Some of the best immersive art experiences that can be enjoyed in Japan are modern exhibit...