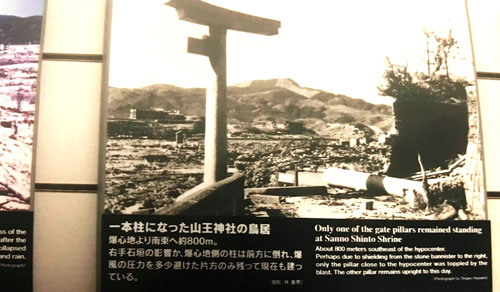 Nagasaki Prefecture is rich in culture, having played an important part throughout history. Today, many things have changed throughout the nation, but in Nagasaki, there are places where you can still see and feel the events of history as if they were yesterday.

One of the most impressive and curious places in Nagasaki is the Sanno Shrine because the main torii (gateway to the shrine) maintains only one pillar, due to the fact that the other was destroyed by the atomic bomb. This shrine was founded in 1638 by Nobutsuna Matsudaira (1596-1662), a feudal lord at that time.

A civil war broke out in Shimabara in the same year, so the general of the government forces arrived in Nagasaki to suppress the war. When he passed through this area, he discovered that the landscape was similar to that of Mount Hiei. So he encouraged the local governor in Nagasaki to build a shrine and the order was obeyed, eventually founding the Sanno Shrine which literally means ‘king of the mountain’.

Many years passed, and Japan, as it entered the Pacific War, suffered the calamity of atomic bombs. The first was the one launched in Hiroshima on August 6, 1945.

Subsequently, the second atomic bomb was dropped on August 9th, 1945 in Nagasaki, causing death and destruction in its wake. From the epicenter of the explosion to the Sanno shrine was only 8 kilometers away. The unimaginable explosion of heat and fire destroyed this shrine in an instant.

Miraculously, the main torii of this sanctuary remained to stand, although it was halved by the explosion of the atomic bomb. One support column was knocked down; but the other somehow remained upright, keeping the door in position. The force of the shock wave turned the torii about 30 degrees on its pedestal base.

It should be remembered that most buildings made of metal or wood that were close to the bomb’s epicenter melted or simply degraded on the spot. It is therefore a truly miraculous event that a torii so close to the epicenter has remained standing. What is most impressive is that it has been over 70 years since the tragedy hit, and this torii has stood on its own two feet throughout the years.

People in Nagasaki call this door the ‘One-legged Torii’.

Near the torii, there are photographs of what the shrine looked like before the bombing. Near the main sanctuary, there are also two large camphor trees. They are said to be 500-600 years old. This means that these trees were exposed to the atomic bomb. One-third of the trees disintegrated and the remaining parts were burned so badly that the trunk turned completely black. But after two years, an incredible life force created the new leaf buds. The citizens of Nagasaki embraced these trees and took them as a symbol of life and hope to move forward. These trees are designated as national natural treasures.

The miracle of the torii that remained standing along with the miracle that nothing happened to the Suwa Shrine (the most important site in Nagasaki) and that it remained intact, was a strong indication to the residents that the energy of the Shinto shrines is truly powerful, capable of withstanding even hell on earth because of its high spiritual power.

Visiting the torii of the Sanno sanctuary can give the visitor the opportunity to observe in a more direct way all that happened that catastrophic day, but in spite of everything, the torii remained undefeated, demonstrating that even in the worst moments there is a point of light and hope.