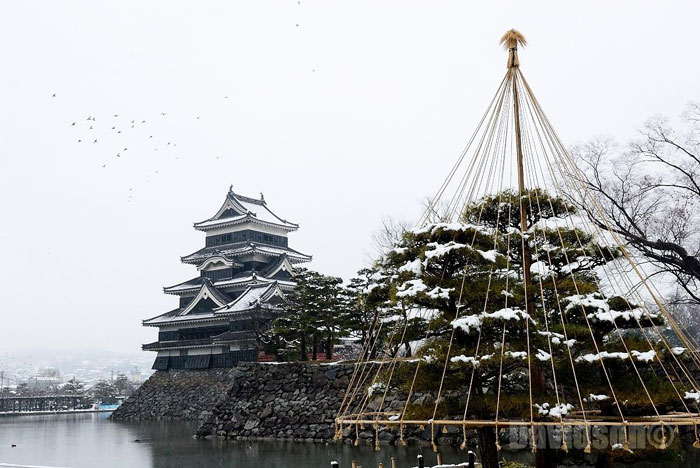 Matsumoto is centrally located in Nagano prefecture and is surrounded by mountains. The city is especially famous for Matsumoto Castle, which is one of Japan’s original historic castles. The castle is also known as the ‘Crow Castle’ due to its black exterior and it was the seat of the Matsumoto domain.

The keep (tenshukaku), which was completed in the late sixteenth century, maintains its original wooden interiors and external stonework. It is listed as a National Treasure of Japan. Matsumoto Castle is a flatland castle (hirajiro) because it is not built on a hilltop or amid rivers, but on a plain. Its complete defenses would have included an extensive system of inter-connecting walls, moats, and gatehouses.

The castle’s origins go back to the Sengoku period or civil war period. At that time Shimadachi Sadanaga of the Ogasawara clan built a fort on this site in 1504, which was originally called Fukashi Castle. In 1550 it came under the rule of the Takeda clan and then under shogun Tokugawa Ieyasu.

When Toyotomi Hideyoshi transferred Ieyasu to the Kanto region, he placed Ishikawa Kazumasa in charge of Matsumoto. Kazumasa and his son Yasunaga built the tower and other parts of the castle, including the three towers: the keep and the small tower in the northwest, both in 1590, and the Watari Tower; the residence; the drum gate; the black gate, the Tsukimi Yagura, the moat, the innermost bailey, the second bailey, the third bailey, and the sub-floors in the castle, much as they are today. They also were instrumental in laying out the castle town and its infrastructure. It is believed much of the castle was completed by 1593–94.

During the Edo period, the Tokugawa shogunate established the Matsumoto Domain, of which the Matsudaira, Mizuno, and others were the daimyo lords. For the next 280 years until the abolition of the feudal system in the Meiji Restoration, the castle was ruled by the 23 lords of Matsumoto representing six different daimyo families. In this period the stronghold was also known as the Crow Castle because its black walls and roofs looked like spreading wings.

Nowadays the castle is open to the public, and you can not only walk around inside but also see displays of weapons dating back to the time the castle was built. There are also festivals and events held on the castle’s grounds throughout the year.

Other Things to See

There are two noteworthy museums in Matsumoto: the famous ukiyo-e museum about woodblock prints, and the Rekishino Sato (Open Air Architectural Museum) where you will find architecture from the Edo and Showa period with a gorgeous backdrop of rice paddies and mountains. And Matsumoto City Museum of Art exhibits world famous Yayoi Kusama’s works.

For some souvenir shopping, you had best head to Nawatedori, here you can find things ranging from antiques, secondhand books, and old-fashioned snacks. One place that is not very known amongst foreign tourists but nonetheless worth a visit is the Former Kaichi School where you can see how students studied during the Meiji period.

The city of Nagano is located in the northern part of Nagano Prefecture. It is a good plac...
">

Yudanaka, rich in natural hot springs, is located deep in the mountains of the Yamanouchi ...
">

Hakuba, located in the Northern Alps of Nagano Prefecture, is one of Japan's most popular ...
">

Kamikochi is a remote mountainous highland in the northern part of the Japan Alps, which h...