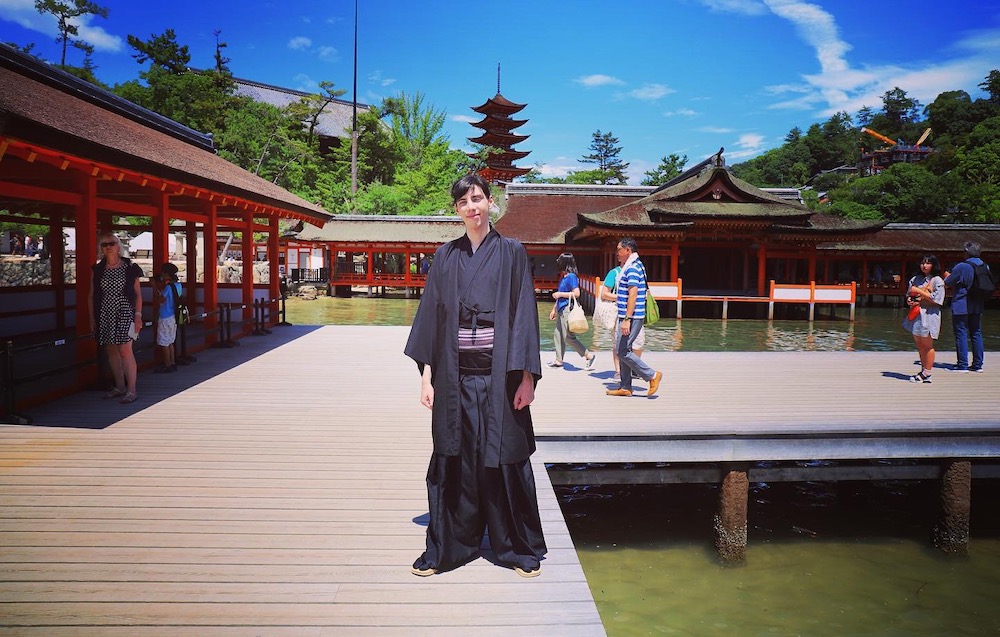 Miyajima Island is located west of Hiroshima Bay, 20 km away from the city of Hiroshima. It has a rectangular shape that covers a territory of 30 km. Although it is a small island, it has mountains of 500 meters high, a fairly steep coast, deep valleys, and waterfalls.

Its real name is Itsukushima which literally means ‘island of worship’. Since ancient times, the island itself was worshiped as a god. Within the region is millenary Shinto shrine Itsukushima-jinja, which is so important for Japan that the island was colloquially called Miyajima, meaning Sanctuary Island. It is estimated that this site was founded in 593.

The original door that looks as if it were floating in the water called O-Torii is the best-known symbol of the sanctuary. It is 16 meters high and was made of camphor trees that are 500-600 years old. Since August 2019, the large door is undergoing maintenance which will last until late 2020, so the O-Torii will be covered with scaffolding during this period.

The mystical Itsukushima Shrine built on the water was registered as a World Heritage Site in 1996. Itsukushima Shrine has since become world-famous, attracting visitors from all over Japan and the rest of the world. Formerly, Miyajima was considered a strictly sacred place, so much so that ordinary people could not enter the island. Subsequently, these restrictions were removed. However, a rule that lasts until today, is that there can be no cemeteries on the island, nor can anyone die or give birth there due to its purity and sacredness. The idea of ​​paying tribute in Itsukushima became popular with fishermen and merchants sailing in the inland sea of ​​Seto. In the Edo period, along with pilgrimages to the Ise Shrine and Shikoku Shrines, Itsukushima Shrine became the main destination for people living in western Japan to take part in this ritual.

The Misen Mountain behind the famous sanctuary is very beautiful and from afar it gives the impression of having the shape of a female body, giving the villagers the understanding that the mountain itself is a ‘Kami’ (Shinto god). A cable car leads to the mountain from the town, but it is also possible to climb it on foot. There are three hiking trails that lead to Misen: the Momijidani, the Daisho-in, and the Omoto. Of the three, the Daisho-in course offers the best views and is not as steep as the other two. The Momijidani course, although it is the shortest, is also the steepest and leads mainly through the forest. Using any route, it takes between 1.5 to 2 hours to reach the summit from the city.

The maple valley called Momiji-dani is very famous for the red leaves in the fall. The environment is of exquisite beauty, the cherry trees in the spring, the fresh greenery in the summer, and the redness of the leaves of the trees in the fall are incredible to take in. The island is also inhabited by deer that, although they are wild animals and you have to be careful, are quite friendly so if you are lucky you will meet them during your time on the island.

As a gastronomic specialty, the island has oysters that can be purchased in small restaurants dedicated to these dishes that serve them with different flavors and textures. In addition to the main sanctuary of the island, the Itsukushima-jinja, there are several Buddhist temples scattered throughout the island. Miyajima has streets of souvenir shops, restaurants, and some ryokan (traditional Japanese hotels), but there are no convenience stores, and at 5 pm the vast majority of establishments close, therefore it is recommended to plan ahead.

Today the Miyajima is considered one of the three most beautiful landscapes in Japan and one of the most important sights in Hiroshima prefecture.

The sacred enclosure of the Itsukushima shrine has the particularity of giving the impression of floating on the water, and in fact, it was built on top of the Seto Sea. Unlike most Shinto shrines, where the torii gate is located on the way to the enclosure, the torii of this shrine is at sea and perfectly aligns with the Honden (main sanctuary).  It is estimated that the sanctuary was founded in 593, and Ichikishimahime no Mikoto, Tagorihime no Mikoto, and Tagitsuhime no Mikoto, the three deities of Munakata, are consecrated.

These three deities of Itsukushima were born when Amaterasu Ōmikami (goddess of the sun) and his brother Susanoo-no-mikoto became engaged in the Celestial Plane, using a jewel and a sword. Since ancient times, they have been revered and worshiped as deities that ensure the welfare of the imperial family, protect the nation, and people related to the sea. The predominant color of the sanctuary is vermilion.

As part of the National Park, the sanctuary has received several distinctions, such as a place of extraordinary scenic beauty, exceptional history, a preservation area, and a natural monument. The virgin forests surrounding Mount Misen, which is behind the sanctuary, are representative of the lush vegetation and abundance of nature that still covers the entire island, even now.

Formerly this sanctuary was considered so sacred that ordinary people could not access it, in order to maintain the purity of the enclosure. Over the years these restrictions have been relaxed and, today, it is a national park that can be visited by anyone in Hiroshima. It is one of the most important sanctuaries in Japan, so it is recommended to visit to admire the beauty of Japanese and Shinto spirituality. Itsukushima-jinja means “Shinto Shrine of the island dedicated to the gods “.

How to get there from Hiroshima

Itsukushima Island, or better known as Miyajima, is one of the most beautiful and important places in the Japanese archipelago. The sacred island is a few kilometers from Hiroshima station, therefore if you are visiting this prefecture it is highly recommended to visit Miyajima

Some of the ways to get to the island from Hiroshima will be explained below.

Step 1:
• From JR Hiroshima train station:
After entering Hiroshima station, go to platform 1 and take the “Sanyo Line” to “Miyajima-guchi and Iwakuni”. You will see the Miyajima sign. Finding the platform is easy. Local trains operate every 15 minutes during the day, 10 minutes at peak time. Then, if you miss the train, the next train will arrive shortly.
Miyajima-guchi is the ninth station from Hiroshima. Travel time is about 30 minutes.
• From the Hiroshima tram station:
Right in front of the Hiroshima train station is the tram station. These wagons go through the surface of the city of Hiroshima, therefore it is an opportunity to see the whole area while heading to the port of Miyajima. It should be noted that the tram also stops at the Hiroshima Peace Park. The journey to the port lasts 50 minutes.
There is a special one-day pass that covers the tram and the ferry ride to Miyajima.
To use the pass you must scrape the date you use your pass in the silver section sealed in the calendar (year, month, and day) with a coin (if you scratch more than one year, month, or day, the pass becomes invalid).
When the pass is used, the scratched side of the pass must be shown to the driver to be allowed to pass.
The pass can be purchased at:
• The Hiroshima station tram information desk (in front of the exit platform)
• Of the drivers in the trams.
• In the main hotels in the city of Hiroshima.
It should be noted that the pass cannot be used on trains and the JR ferry.
• From the boat of the company “Aqua-Net”
Aqua-Net Hiroshima operates a ‘Maritime World Heritage Route’ that connects the Atomic Bomb Dome and Miyajima Island through fast and completely closed boats.
With its dock 50 meters walking downstream from the cafe south of the Atomic Bomb Dome. The comfortable boat goes from La Paz Park directly to Miyajima Island in 45 minutes and vice versa.
As the cabin enters the sea, the windows from all sides guarantee excellent views, close to the water level, the sea, the coast, and the islands while transporting to Miyajima. It is a beautiful trip and a unique experience because you can enjoy the whole area through the sea.
The boats leave approximately every half hour from 8:30 in the morning, with the last boat back from the island at 17:30.

Step 2:
It takes about 10 minutes by ferry to travel from the Miyajimaguchi pier to the Miyajima world cultural heritage site. Two ferry companies operate between Miyajimaguchi and Miyajima Island; the JR ferry and the Miyajima Matsudai Kisen.
The ports are different, so depending on the route that has been taken (Train or Tram) the final stations of the port will have signs to the ferry of the selected company.
On the JR ferry, you can use the JR pass, while on the Miyajima Matsudai Kisen you can use the special one-day tram and ferry pass.
Both boats offer spectacular views of the island and it is a very pleasant tour.

Step 3:
Finally, you will arrive at the ferry terminal. Miyajima is a small island. Upon arrival, you can access the famous Itsukushima sanctuary on foot.
Itsukushima sacred island has been an important part of the history and spirituality of Japan for hundreds of years.