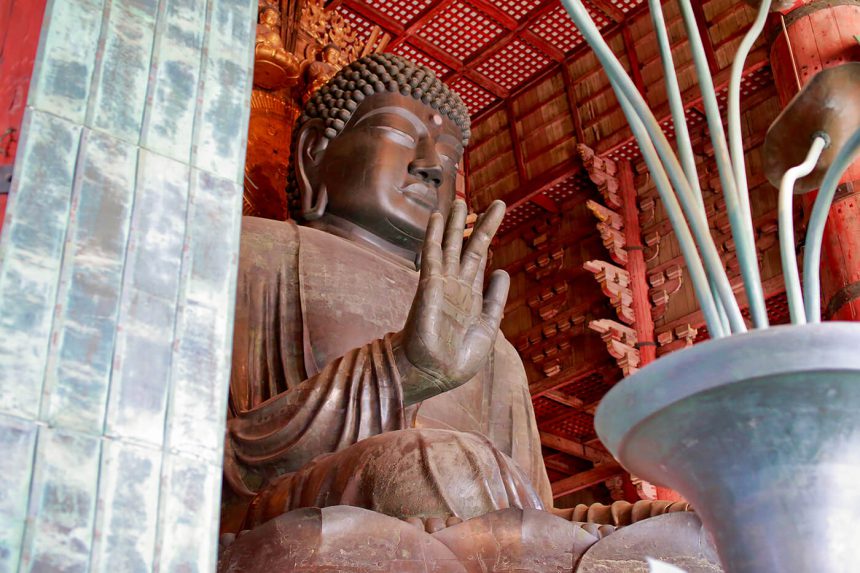 The Todaiji Temple is located in the famous Nara Park and is the world’s largest wooden structure. The origins of the Tōdaiji lie in a temple called Kinshō-ji which was founded in 728 for the repose of the spirit of Crown Prince Motoi, son of Emperor Shōmu. In 741, when the Emperor ordered the construction of a national system of monasteries, the Kinshō-ji received a higher status. In 743 Emperor Shōmu asked for the building of a Great Buddha Image and when the capital was returned to Heijō (Nara), construction of the colossal image of Vairocana was begun on the grounds of the Kinkōmyō-ji and was completed in 749. Construction of the Great Buddha Hall took place at the same time and the image was dedicated in 752 with a lavish consecration ceremony.

According to records kept by Tōdai-ji, more than 2,600,000 people in total helped construct the Great Buddha and its Hall; contributing rice, wood, metal, cloth, or labor, with 350,000 people working directly on the statue’s construction.

In 1180, more than half of the compound including the Great Buddha Hall was destroyed in the fire that resulted from the attack on the Nara temples by the Taira clan. In the next year, restoration of the temple was started by monk Chōgen, and in 1185 the Great Buddha was consecrated. In the following year, what is now Yamaguchi prefecture was appointed to provide income for the reconstruction of Tōdai-ji, and the tempo of the work went up.

Ten years later the Great Buddha Hall was completed. As the temple was finished, learning activities that had not been happening were also revived, and during the Kamakura period (1185-1333) the temple raised many scholar-monks.

The start of the Meiji period in 1868 saw the separation of Shinto and Buddhist religious institutions, and the taking of temple lands by the government threatened the existence of Tōdai-ji. Still, the temple managed to carry out large repairs to the Great Buddha Hall at the start of this century and again in the 1970s, and has worked hard to preserve the extensive compound with all its structures.

Tōdai-ji today preserves many precious cultural treasures from the temple’s past, and it also is a treasure house of traditional Buddhist rituals.

Many people from within Japan and the world visit the temple to worship and pay their respects every year.

Kasuga Taisha Shrine was founded in the 8th century by the Fujiwara family and used to be ...
">

Various kinds of flowers blooming through the year on Hasedera's grounds, the temple has b...
">