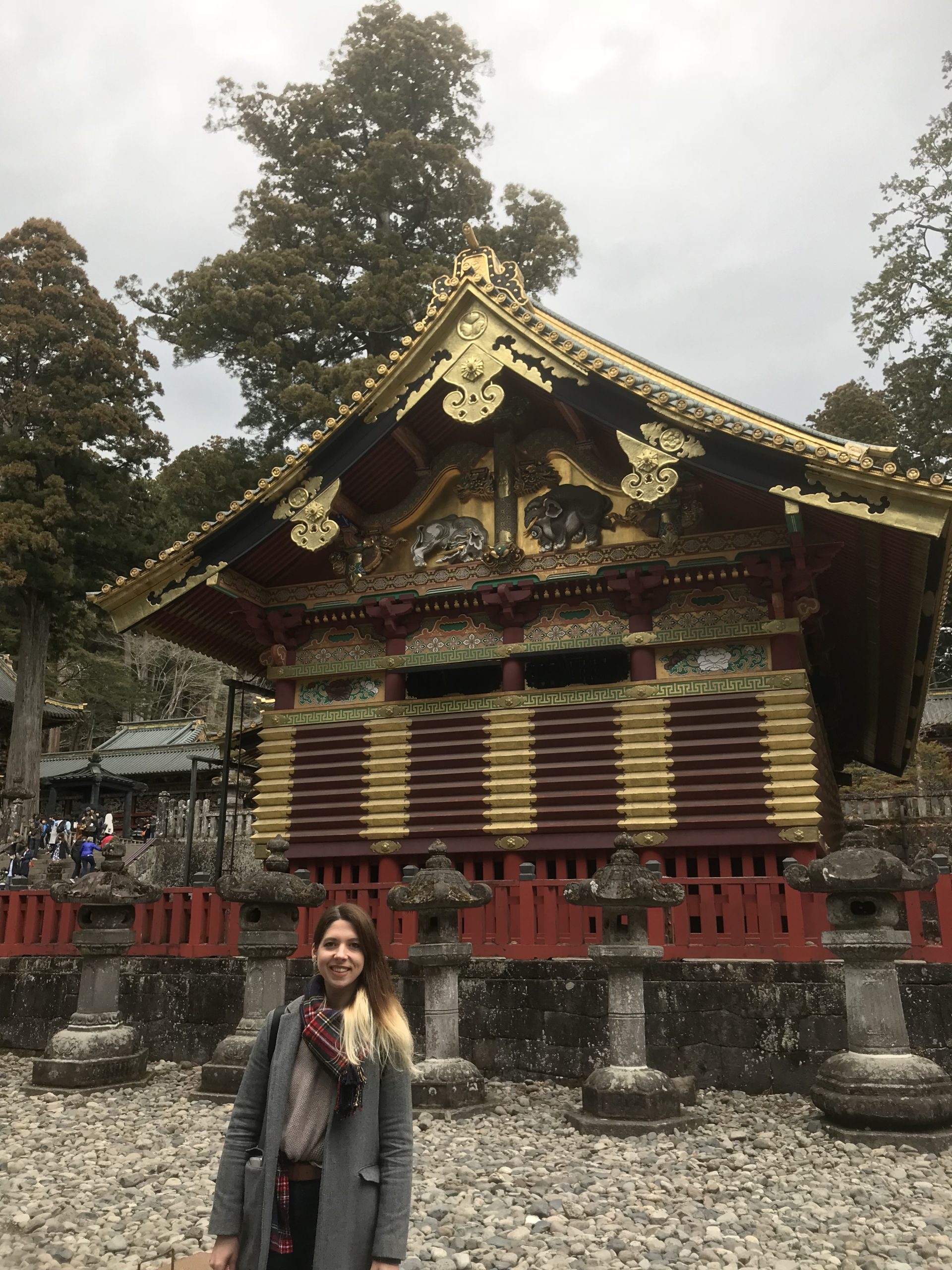 The Toshogu Shrine in Nikko was built in 1617 to function as the mausoleum of shogun Tokugawa Ieyasu. The main shrine buildings were built by the third shogun, Tokugawa Iemitsu in 1636. The building of the Toshogu represented the climax of the Gongen-zukuri style which characterizes Japanese shrine architecture. Skills of the highest level available at the time were applied to the architectural decoration such as carvings and coloring. Eight buildings such as the honden (main hall), the Ishi-no-ma (stone hall), the haiden (worship hall), and the Yomei-mon (tower gateway) have been designated as National Treasures, whereas a further thirty-four buildings were designated as Important Cultural Properties.

The Honden, Ishinoma, and Haiden

The Honden, Ishinoma, and Haiden, constructed in 1636, has not undergone any alteration, except that the roofing materials were replaced for maintenance purposes in 1654 and that the stone foundations on which the Honden stands were replaced in 1690. This building consisting of three chambers is a perfect realization of the Gongen-zukuri, a Japanese architectural style in which the Honden (main hall) and the Haiden (worship hall) are linked in an H shape by a central stone-floored chamber called the Ishinoma. As such, it has shed great influence upon the architectural style of mausoleums and other shrine buildings in the following generations, providing the role model to follow as a source of inspiration. Most experienced and skilled craftsmen at that time were involved throughout the process of construction, including the design of the decorative carving and coloring.

The Shomen Karamon and the Haimen Karamon, constructed in 1636, have not changed from the original, except for the roofing materials which were replaced for maintenance reasons. In particular, the Shomen Karamon shows skillful workmanship in its structure and decoration; the four eaves projections were designed into cusped gables after a Chinese fashion and the engraved works designed in woven patterns, the inlaid works and the copper sculptures on the roof are unquestionable masterpieces of decoration.

The Tozai Sukibe, founded in 1636, has not changed from its original condition except that the materials for the foundation and the roofing were replaced for maintenance reasons. This wall, stretching out from both sides of the Karamon for 87 bays (approximately 160 in), encloses the Honden, Ishinoma, and Haiden. The openwork carving in floral patterns on the latticed-windowed wall and the openwork sculpture in the shapes of birds and flowers on the transom are distinctively elegant features of this construction, different in design from the other structures.

The Yomeimon, probably the most famous work of architecture in Nikko, was erected in 1636 and has been maintained through repeated roofing repair and paint repair to keep it in a condition equal to that at the time of original construction, including its decorative sculpture and other decorative members. It is the most elegantly decorated among the shrine buildings of Toshogu. The great extent of decorative effort peculiar to this particular construction can be seen in the fact that even the structural members are decorated with patterns and sometimes ornamented with sculptures on the surface. Admirable workmanship is recognizable in the decorative expressions produced through a combination of painting, coloring, and metal fittings carefully selected in consideration of the subjects or motifs to be expressed in them and the durability of the materials.

The Tozai Kairo is a semi-enclosed corridor constructed in 1636. Although its northern part was damaged and lost in an earthquake that struck the region in 1647, the other parts that survived the catastrophe remain without any alteration whatever since then. Branching out from the 2-bay wing walls, called Sodebe, of the Yomeimon to the east and the west, the Tozai Kairo surrounds the Honden on the south, the east, and the west. The corridor extends 220 m in total and the southern part is decorated with 25 sculptured panels.

The Mizuya, a fountain pavilion, has been maintained in its original form without alteration since its construction in 1636 except for a small number of structural members that had to be replaced for maintenance reasons. The noteworthy architectural techniques introduced in the construction of this water-supply facility include the use of stone columns and the installation of an aqueduct from the water source near the Takino-o-jinja to the Mizuya water basin. In addition, a siphon mechanism was applied as part of the water-supply system, which was an innovative approach at that time of Japanese history. (Today, water is supplied through contemporary metal piping.)

The Shinkyo, the sacred horse stable, is a 1636 construction, which remains in its original condition, although it’s partitioning and its transom has been slightly altered. This structure represents the type of stable found in Shoin-zukuri, the typical architectural style for residences of feudal lords. It is the only unpainted bare wood construction among all of the buildings of Toshogu and it is the largest extant horse stable constructed at that time.

The Gojunoto is an 1818 reconstruction of the original five-storied pagoda, which was erected in 1650, but which was lost in a fire in 1815. In order to make the tower stable enough to resist wind and earthquake forces, the center pillar is suspended on the fourth story and held 10 cm above the ground — not resting on a foundation stone — thereby functioning as a dynamic counterweight which maintains the center of gravity.

The Ishidorii has remained in its original form since its construction in 1618. The torii gate, which is 9.2 m tall and 13.2 m wide, is made out of 15 blocks of stone, instead of wood, which is the material usually used for torii. The Ishidorii has a unique structure well designed to resist earthquakes; the primary top rail and the secondary top rail, called Kasagi and Shimaki, are hollowed in order to minimize the weight and a pair of grafted stone columns are set firmly to support them.

The Sakashitamon was erected in 1636 as the entrance gate to the Okusha. It has remained in its original form since its construction except for minor changes resulting from the process of repairing roofing, painting, and metal fittings. Its decoration characterized by the use of cloisonne-enameled fittings projects a distinctive impression of brightness.

The Okusha Hoto was originally a wooden building when first constructed in 1622, but was remodeled into a stone structure in 1641. The bronze pagoda, which we see now, is a 1683 reconstruction, built after an earthquake destroyed the stone building. In order to keep the enshrined remains of Tokugawa Ieyasu dry underground beneath the pagoda, the stone bedded floor is sloped to drain outward and the joints of the stone blocks constituting the stepped foundation are sealed with lead to block the penetration of rainwater.

The Otabisho Honden is a 1685 reconstruction; the original building, known to have existed already in 1620, burned down in a fire, which broke out in 1684. This building is famous for a festival called Togyosai or Hyakumonozoroi Sennin Gyoretsu (roughly translated as “the thousand marchers’ procession”), a ritual which is observed annually to keep alive the memory of the arrival of Tokugawa Ieyasu’s remains at Nikko. In the climax of the ritual, a portable shrine, symbolic of the carriage enshrining Ieyasu’s remains, is carried into this building.

Nikko is a popular city for international tourists as well as Japanese tourists and the ci...
">

The Futarasan shrine has been worshiped since ancient times as the center of beliefs conne...