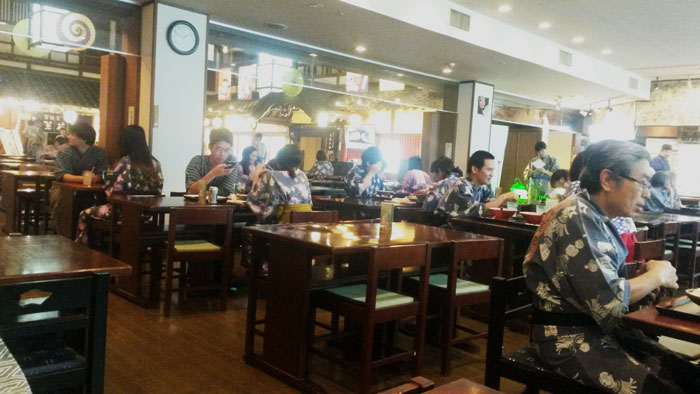 Odaiba is known for being the most futuristic island of Tokyo where you can find robots, the Rainbow Bridge, high-tech and lighting museums, automobile conventions, and plenty of gaming and VR fun. But Odaiba is also home to one of the most traditional but fun experiences in Tokyo.

Oedo Onsen Monogatari is an onsen theme park and was created to resemble a bathhouse in the Edo period (1603-1868). Upon arrival, you choose a design of yukata (summer kimono) and leave your luggage in a locker and change into your yukata. There are signs in several languages to help those who are not sure about the onsen etiquette.

When you have changed it is time to enter the recreation area where there are traditional Japanese games to play, a tower in the center of the area in the style of ancient cities, and a variety of Japanese restaurants. Everybody is dressed in yukata which will give you the feeling of being immersed in a fun version of a city during the Edo period. The main attractions are, of course, the baths, with a beautiful unisex outdoor area with a large footbath and a separate indoor/outdoor bathing area for men and women as this is the part where you will go nude.

Formerly men and women bathed together, but due to regulations imposed during the Meiji era men and women must bathe separately. The water of the onsen relaxes the body in all senses, and the baths contain special minerals that are good for your skin and body. Before entering the indoor baths you should leave the yukata in a locker and enter the area nude. You can only bring a small towel that will be provided to you to cover yourself. Those towels are not for use inside the water, so you can leave it on your head or on the edge of the bath while you are soaking in a bath.

In Japan, people are not ashamed of their naked bodies, because that is how they came to the world and have no problems sharing space with others in the same state. This is a culture of many centuries of antiquity. In the Middle Ages Europeans took a bath only a few times a month or even less, while in Japan people went to the public baths called sentō or to the Onsen to wash every day. Nowadays, when going to an onsen, hierarchy barriers are lost, since everybody is the same without clothes. It is very common to see people of all ages sharing these spaces with almost no shame.

If you have long hair you are advised to tie up your hair before using the baths or wear a shower cap, and before you enter a bath it is customary to first throw some water over yourself with the provided buckets to show you are really clean before you enter and get used to the temperature. Don’t forget to take a shower before you enter your first bath, as everyone is using the same water you are expected to only enter the water after you clean yourself.

Tectonic activity doesn't just bring earthquakes and volcanic eruptions with it, it also b...