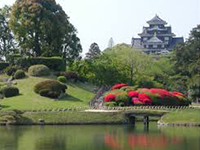 Okayama is the capital of Okayama Prefecture and the largest city in the Chugoku Region after Hiroshima. It is the center of administration and business for the prefecture and a crossroads for traffic between the San-in region and Shikoku. The city is an important transportation hub, the Sanyo Shinkansen meets with the only rail connection to Shikoku.

The city originally developed as a castle town during the Edo Period (1603-1867). Okayama Castle, the Koraku-en Garden (one of the three major gardens in Japan), and a number of art museums and science museums are found here. Okayama Castle was built in the 16th century. The castle tower has been rebuilt, but the Tsukimi-yagura turret and other structures are original. The Koraku-en Garden, which took 14 years to complete in the 17th century, was the first lawn garden in Japan. The garden is 133,000 square meters, and visitors can view Okayama Castle.